Back in 2018, our book club read some of the Patrick Melrose novels. Technically, I believe we were reading the first three, since they are relatively short, but not everyone finished that much. I read only the first novel, Never Mind, which I reviewed at the time, intending to come back and read the rest in sequence. This is the second novel, Bad News. 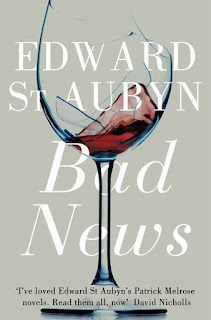 Like the first novel, Bad News is somewhere between a novella and a short story, although at around 160 pages, it is definitely long enough to be a novella. It too focuses on an extremely limited time frame, that of a couple days, and a particular scenario or idea, so to speak.

Patrick Melrose is now grown up, at least physically. He is twenty-two, and a marginally functional drug addict. The “bad news” that kicks off the story is the death of his abusive father, possibly the most vile person I have encountered in fiction. So, good riddance. Except that he clearly continues to be a demon haunting Patrick. Anyway, David dies in New York City unexpectedly, and as Patrick is the next of kin (his parents split up), he gets to claim the body. Over the course of two days and nights - more or less: it is difficult to follow the exact timeline because Patrick is so drugged out of his mind that sleep and time seem both distorted out of recognition - Patrick sees his dead father, meets with a few friends, visits a few drug dealers, nearly kills himself a couple of times, and works through some of his complex feelings about his father in the most unconstructive way possible.

As in the previous book, excellent writing combines with a thoroughly distasteful story, unpleasant characters, and drug hallucinations that just won’t end. While not strictly autobiographical, the books are somewhat true to life. St. Aubyn did in fact take obscene quantities of drugs during this time in his life - funded by an inheritance from his grandmother. And it is a miracle he is alive. (As he fully admits.)

The thing is, despite all the darkness in this book, it does have a sort of humor. It is an ugly, sneering, nasty humor some of the time, kind of like you would expect David Melrose to appreciate. But St. Aubyn also has an eye for a less vicious wit too, and his observations of various broken characters can be empathetic too. It would have been interesting to have seen more of those characters. In the first book, Patrick was less of the focus, so the other people in the story got more of the time. In this one, everything is filtered through Patrick’s head, so much of the time he is way too smashed to even figure out what is going on around him.

It is kind of interesting to read about drug addiction from someone who writes this way. I have read other books, of course, fiction and non-fiction, in which drugs feature to varying degrees. But there is something peculiarly horrifying about this one. Patrick has what is essentially the great love affair of his life with cocaine and heroin (often at the same time), so St. Aubyn can write a rather authentic love letter to the drugs. But at the same time, reading this book doesn’t paint a pretty picture of drug use and addiction at all. Even as Patrick praises the glorious feelings and the escape from the terror in his own psyche, the horrors of what the drugs do to him and what they make him do are so apparent that I cannot imagine wanting to try one.

The psychology is fascinating too. I feel as if Patrick takes the drugs in part because he fears he is like his father - and then the drugs enable him to act more like his father. He isn’t an outright abuser, but he can be verbally cruel in the extreme, and he sure does sound like David at times. It is a weird kind of self-awareness, which one wonders if St. Aubyn himself came to possess as part of his therapy.

There are a few scenes which stood out. Right at the outset, Patrick is accosted on the plane by a guy named Earl, a caricature of the most vulgar of the nouveau riche, and an incentive to never fly with the rich. Yikes.

Patrick more or less escapes by withdrawing into a mental scene involving his girlfriend Debbie, or, more accurately her father.

There is also an interesting line - a remix of Hamlet, in essence - when Patrick is about to eat and drink himself into oblivion in a futile attempt to stay off heroin for the remainder of the day.

Eating was only a temporary solution. But then all solutions were temporary, even death, and nothing gave him more faith in the existence of an afterlife than the inexorable sarcasm of Fate. No doubt suicide would turn out to be the violent preface to yet another span of nauseating consciousness, of diminishing spirals and tightening nooses, and memories like shrapnel tearing all day long through his flesh. Who could guess what exquisite torments lay ahead in the holiday camps of eternity? It almost made one grateful to be alive.

I’ll mention the scene in the funeral home where he is accidentally directed to the wrong corpse - complete with a party by the friends and family - and then is tempted to put his foot on his father’s chest as a final gesture of hate. Also the wretched search for drugs in a disreputable part of NYC, because his usual source was sleeping off a binge. Both of these are emotionally devastating, but in different ways.

Finally, there is a scene where Patrick is talking with friends of his mom’s, and hoping to score with the daughter (he doesn’t), and his father comes up. Eddy (the husband) had his own difficulties with his father.

“But wouldn’t we now say that he was just wery disturbed?” asked Eddy.
“So what if we did? When the effect somebody has is destructive enough the cause becomes a theoretical curiosity. There are some very nasty people in the world and it is a pity if one of them is your father.”
“I don’t think that people noo so much about how to bring up kids in those days. A lot of parents in your fawther’s generation just didn’t know how to express their love.”
“Cruelty is the opposite of love,” said Patrick, “not just some inarticulate version of it.”

That really is the difference. I know plenty of people who have struggled with their children (and that is me sometimes too), and most of them are just humans who fail. But there are some for whom the issue isn’t “love”: it’s cruelty. David raped Patrick - and that was evil cruelty. His mom looked the other way, which wasn’t love either. So there are ordinary human failings - and we all will fail to a degree. And there is deliberate cruelty, which cannot and should not be dismissed as “they didn’t know how to love.” (Just to be clear, I do not mean to imply anything about my parents here – this is a more general comment stemming from my experience both with divorce law and with toxic church doctrine about abuse.)

It will be interesting to see where this book series goes from here. It has been pretty dark so far, without much hope. Since the next book is called Some Hope, perhaps there will, at long last, be some.

My biggest issue with the novels so far is that St. Aubyn, like his protagonist, comes from a place of overwhelming privilege and wealth. Both family background and a multi-million pound inheritance enabled him to chase drugs at ludicrous expense while still living a wealthy lifestyle. His aristocratic family, even if he wasn’t part of that branch, allowed him to drop names and get his degree by the skin of his teeth. He still hobnobs with the A List, so to speak. One of us plebes who did what he did wouldn’t have ended up as a best selling novelist, but broke and imprisoned and eventually dead and looked at with contempt by all. It burns a bit to see that, as it always has, money matters far more than choices if you have enough of it. Although St. Aubyn is a good writer, he also seems to me to be eminently slappable prick and the sort I would loathe to be around in person. (And no, the New Yorker article on him doesn’t help that at all.) Yeah, I feel sorry for him for a horrific childhood, and find his writing fascinating. But, like Patrick, I pretty well dislike him personally, and wish he had had to actually experience poverty for once. Oh well. I feel the same way about Wagner. I shall be entertained, yet also glad I never have to suffer through a dinner party with him.

The Guardian had an interesting article on assumption of wealth and class within the book writing and publishing universe. To a degree, St. Aubyn is a spot-on example of the way things work. I’m not clarivoyant enough to know how to change the system, other than to keep reading books by those outside the “white, upper-middle-class, and privileged” norm.

***
Here is the list of books that our book club has read. At least the ones I have read too. Most of these were read for the club, but a few were ones I read previously - those posts pre-date the club discussion - and some I read afterward, because I missed the discussion. I have listed them in no particular order.

Daisy Jones and the Six by Taylor Jenkins Reid
Calypso by David Sedaris
The Air You Breathe by Frances de Pontes Peebles
The Penelopiad by Margaret Atwood
The Boy Who Harnessed the Wind by William Kamkwamba and Bryan Mealer
The Haunting of Hill House by Shirley Jackson
There There by Tommy Orange
Little Fires Everywhere by Celeste Ng
Be Frank With Me by Julia Claiborne Johnson
The Song of Achilles by Madeline Miller
Educated by Tara Westover
Stiff by Mary Roach
A Gentleman in Moscow by Amor Towles
Ready Player One by Ernest Cline
The Marsh King’s Daughter by Karen Dionne
Rosemary’s Baby by Ira Levin
Never Mind by Edward St. Aubyn
All the Birds in the Sky by Charlie Jane Anders
Artemis by Andy Weir
Annihilation by Jeff Vandermeer
The Goldfinch by Donna Tartt
The Island of Doctor Moreau by H. G. Wells
The Master and Margarita by Mikhail Bulgakov
The Radium Girls by Kate Moore

Posted by Diary of an Autodidact at 12:26 PM