How to Invent Everything by Ryan North

This book was a gift from my wife this last Christmas. Ryan North is a rather eclectic writer, from his “choose your own adventure” style riffs on Shakespeare to Dinosaur Comics to The Unbeatable Squirrel Girl. And then this book, which isn’t really like anything else. 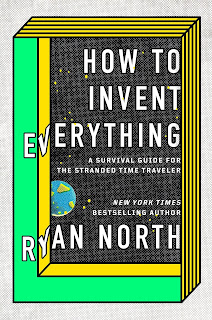 How to Invent Everything starts from the premise that it is a guidebook to be used by the time traveler - who has rented a recreational time machine from the company who made the guide - but something has gone badly wrong and they cannot return to their own timeline. (For which the company definitely is not legally liable…) In other words, if you find yourself somewhere back in human history, how do you make your world better?

The book starts with a few frequently asked questions, then proceeds to the key question: where in time are you? A handy flowchart helps you figure it out. The book assumes that, for it to be any use, you have to have arrived at some time when humans have evolved to their modern biological state (about 200,000 years BCE to the present) and can thus invent civilization and stuff. If you find yourself before that, the guide is of some use, but one person can only do so much…

One thing that is quite fascinating is that biologically modern humans evolved long before culturally modern humans did. We appear to have spent the first 150,000 years of our biological existence living essentially like animals. Sure, certain “modern” behaviors appeared here and there in fits and starts - but they disappeared because they couldn’t be passed on to others. It was the development of language which set us on the trajectory toward civilization.

The book starts its “how to invent” section with the five fundamental technologies for civilization:

It is hard to argue with this list, although in chronological time, the calorie surplus happend second, after spoken language. (This was NOT a coincidence.) As the book points out, it is embarrassing how long it took us to discover some of these things. In my opinion, the most embarrassing by far is the fact that we didn’t invent non-sucky numbers until about 650 CE. That is astonishing, honestly, considering all the stuff we did figure out.

I loved the book’s concise (and slightly tongue in cheek) description of the limits of science. Science is:

This has been one of the longstanding beefs I have had with my Fundamentalist upbringing: the idea that “since science doesn’t deal in certainties and has changed over time, the beliefs of ancient peoples are true and science is a lie.” This is pretty obviously baloney, but it was taught as (literally) gospel truth. Sure, Relativity has replaced Newtonian physics at the planetary scale, but it doesn’t mean that the earth is flat. Isaac Asimov wrote what is still the best explanation of this phenomenon. Thus, the point isn’t that our current understanding is “wrong,” but that it can - and should - develop to be more right than it is now.

Side note on science, from one of the endnotes: we have this weird mythology of science that says that it is a series of epiphanies, often discovered by accident. This isn’t exactly true - or even nearly true.

Most cutesy stories for scientific invention are false, but they persist because we tend to love the “single moment of accidental insight that changed the world” narrative much more than we love the competing “it was a lot of hard work and study that took up a good portion of my life” storyline.

The book has a generally snarky and humorous tone throughout, which some will like more than others. I found it amusing, and a useful technique to make a summary of human technology far from dry.

For example, here is a bit from the section on domesticating animals, which answers (definitively) the ancient question about chickens.

USES
Chickens are a delicious source of both meat and eggs. Plus, they’re omnivorous, which makes them easier to feed than cows.
To answer your question: the egg came first, as eggs evolved in other animals millions of years before chickens ever appeared.
To answer your second, newly clarified question: the chicken egg also came first. Inside the first chicken egg was a zygote carrying a mutation that allowed it to become the first chicken. This egg, with a mutated zygote inside, was therefore laid by a protochicken. Evolution!
Aristotle wasted a lot of time pondering this problem around 350 BCE and ended up concluding that both chickens and eggs must have always existed as two eternal constants in the cosmos. See? These are the conclusions you reach when you don’t know evolution is a thing.

In addition to the snark, the book is interspersed with a bunch of fun quotes, which are attributed to “~You (also [original author].”

The book isn’t “original” in the sense of containing new information. Rather, North takes his information from a range of reputable secondary sources, all of which are endnoted. It was kind of fun to find reference to a book which I already read. For example, on the topic of how bread is made (and therefore beer and other alcohol), North cites the delightful A History of the World in Six Glasses by Tom Standage. The point in this case is that the invention of alcohol was likely what led humans to abandon the hunter-gatherer lifestyle and embrace agriculture. You can eat without farming, but you can’t make booze without it. And alcohol, despite what the Fundies say, is fundamental to civilization and religion - and that very much includes Christianity.

Also on the topic of bread, the book points out (correctly) that there is no such thing as vegetarian bread. (Yeast is not a plant, and the way we use it is kind of similar to how we use animals - they do the labor, then we kill and eat them…)

Pretty funny too was the section on salt. North points out that, until recently (when salt became really cheap), whiter salt was considered better.

Whiter salt is typically more desirable, at least until white salt becomes cheap and commonplace, at which point everyone starts paying more for exotic colors and flavors of impure “raw” salt. That’s right: those expensive “red salts” you used to pay a premium for were just regular salts with some dirt in them!

How about another snarky bit on how to discover penicillin?

CIVILIZATION PRO TIP: Sometimes all you need to do to become one of the greatest scientists in history is to pick your nose and wipe it on a petri dish.

Not all the snark comes directly from North, though. I loved this quote from Ghandi, of all people:

“My grandfather once told me that there were two kinds of people: those who dod the work and those who take the credit. He told me to try to be in the first group; there was less competition there.”

The book goes all the way through logic gates for building computers, and touches on pretty much every major technology - at least the fundamentals of it. While it seems impractical to build some of the things, it is apparent that knowledge of how things work could indeed lead to serious shortcuts around the obstacles that took humans thousands of years to solve.

There are a lot of fun sections in the book, too many to mention. The summary of major religious and philosophical beliefs using the “high five” is marvelous, to name just one. While not exactly a deep scientific book, it is a fun diversion, and actually contains a great summary of the ideas and knowledge that civilization is built upon.

Posted by Diary of an Autodidact at 1:46 PM