My wife found this mint condition “used” copy of the book for me. As is my practice, I am reading through it systematically. Since both of Heaney’s first two collections (or at least the excerpts in this book) are fairly short, I decided to read both. Since both were published in the 1960s, I will consider it a decade of reading. 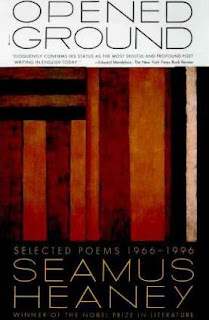 I admit to being a fan of Seamus Heaney, both for his poetry and the way he read it. My first real introduction was through The Spirit Level, which remains my favorite of his books. “Mint” in particular is one of my all time favorite poems. I also enjoyed his translation of Beowulf, which adds so much to the story because of its keen ear for sound and rhythm.

The collection kicks off with what is probably Heaney’s best known poem, “Digging.” Here is the classic video of him reading it.


The title for the first collection comes from a poem about the young poet losing his appetite for collecting frog eggs after fearing the frogs would have their revenge on him. I won’t quote the whole thing, but it is an amusing poem.

Here are the ones which I liked best:

As a child, they could not keep me from wells
And old pumps with buckets and windlasses.
I loved the dark drop, the trapped sky, the smells
Of waterweed, fungus and dank moss.

One, in a brickyard, with a rotted board top.
I savoured the rich crash when a bucket
Plummeted down at the end of a rope.
So deep you saw no reflection in it.

A shallow one under a dry stone ditch
Fructified like any aquarium.
When you dragged out long roots from the soft mulch
A white face hovered over the bottom.

Others had echoes, gave back your own call
With a clean new music in it. And one
Was scaresome, for there, out of ferns and tall
Foxgloves, a rat slapped across my reflection.

Now, to pry into roots, to finger slime,
To stare, big-eyed Narcissus, into some spring
Is beneath all adult dignity. I rhyme
To see myself, to set the darkness echoing.

When you have nothing more to say, just drive
For a day all round the peninsula.
The sky is tall as over a runway,
The land without marks, so you will not arrive

But pass through, though always skirting landfall.
At dusk, horizons drink down sea and hill,
The ploughed field swallows the whitewashed gable
And you're in the dark again. Now recall

The glazed foreshore and silhouetted log,
That rock where breakers shredded into rags,
The leggy birds stilted on their own legs,
Islands riding themselves out into the fog,

And drive back home, still with nothing to say
Except that now you will uncode all landscapes
By this: things founded clean on their own shapes,
Water and ground in their extremity.

I love exploration, whether on foot or by car, and Heaney makes this one come alive. In these days when a lot of my favorite places are closed to slow Covid-19, I am enjoying poems about places. I look forward to better days ahead.

This next one is a fascinating, multi-layered poem that gets better with each reading. The title, “Undine,” refers to a water sprite in European mythology. As the inspiration (in part) for The Little Mermaid, undines cannot gain a soul unless they marry a human. However, they will die of the human is unfaithful to them. In this poem, Heaney melds the legend of the undine with a farmer cleaning out his ditch. The language does so many things. It evokes the smell of mud and earth and stagnant water. But it is also shockingly sexual. Bringing together all those elements: the earth, mythology, and sex in a way that unexpectedly works is one of Heaney’s best skills.

He slashed the briars, shoveled up grey silt
To give me right of way in my own drains
And I ran quick for him, cleaned out my rust.

He halted, saw me finally disrobed,
Running clear, with apparent unconcern.
Then he walked by me. I rippled and I churned

Where ditches intersected near the river
Until he dug a spade deep in my flank
And took me to him. I swallowed his trench

Gratefully, dispersing myself for love
Down in his roots, climbing his brassy grain ---
But once he know my welcome, I alone

Could give him subtle increase and reflection.
He explored me so completely, each limb
Lost its cold freedom. Human, warmed to him.

The second half of the second collection has a lot of poems about the “lough” (Irish version of “loch”) and the surrounding bog. Two of those poems seemed particularly lovely to me. Enjoy.

The lough waters
Can petrify wood:
Old oars and posts
Over the years
Harden their grain,
Incarcerate ghosts

Of sap and season.
The shallows lap
And give and take:
Constant ablutions,
Such a drowning love
Stun a stake

To stalagmite.
Dead lava,
The cooling star,
Coal and diamond
Or sudden birth
Of burnt meteor

Are too simple,
Without the lure
That relic stored—
A piece of stone
On the shelf at school,
Oatmeal coloured.

We have no prairies
To slice a big sun at evening--
Everywhere the eye concedes to
Encrouching horizon,

Is wooed into the cyclops' eye
Of a tarn. Our unfenced country
Is bog that keeps crusting
Between the sights of the sun.

They've taken the skeleton
Of the Great Irish Elk
Out of the peat, set it up
An astounding crate full of air.

Butter sunk under
More than a hundred years
Was recovered salty and white.
The ground itself is kind, black butter

Only the waterlogged trunks
Of great firs, soft as pulp.
Our pioneers keep striking
Inwards and downwards,

Every layer they strip
Seems camped on before.
The bogholes might be Atlantic seepage.
The wet centre is bottomless.

That line “an astounding crate of air” describing the elk fossil is brilliant and unforgettable. I love the whole poem and its imagery.

I’m not sure what else to say about Heaney. I love his style, including the peculiar use of enjambment across stanzas. The poems are fairly traditional, yet not exactly regular or rhymed. I am never disappointed to read Seamus Heaney.

Posted by Diary of an Autodidact at 2:36 PM