Our Town by Thornton Wilder

Last year, our library sale had a huge collection of Library of America hardbacks for sale at crazy-low prices ($3-5 a book). While I couldn’t get all of them, I did pick up a couple dozen to add to my collection. Two of those add up together to be the major works of Thornton Wilder.

Because of the Covid-19 shutdown, I have been unable to see live theater for a couple months. (Kudos to local thespians for all the fun stuff they are doing online - you guys and gals are one of the best things about this town!) Instead, I have been reading more drama. 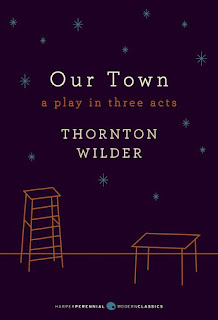 I like this cover because it captures the sparse set, the use of the stars as a theme,
and the way it asks the audience to fill in the scene from imagination.

I decided to read Our Town for two reasons. First, it is one of Wilder’s best known works - and it won a Pulitzer. But also, the movie version features the music of Aaron Copland, which I got to play a bit of for a movie concert back in the day.

A small-town orchestra to go with a small town.

In addition to the play itself, I read the additional materials in this volume: three short pieces by Wilder on the play, plus part of the correspondence between Wilder and producer Sol Lesser as they worked together to revise the screenplay for the movie.

First performed in 1938, Our Town seems fairly tame by today’s standards. But at the time, it was unusual and experimental. There is no scenery, a few chairs and tables for props, and the “Stage Manager” breaks the fourth wall and addresses the audience throughout. Questions from carefully planted members of the “audience” also ask questions in the first act. These innovations seem normal now, over 80 years later, but were hardly usual at the time. The play also seems traditional in its values, but was perhaps a bit shocking to a 1930s audience. I’ll get to why on that later.

The play is set in the fictional town of Grover’s Corners, New Hampshire, at the turn of the 20th Century. It is one of those “typical” New England towns with white clapboard houses, just changing over from horses to cars, and so on. To go with this idea and the sparse staging, Wilder directed that “It is important to maintain a continual dryness of tone, -- the New England understatement of sentiment, of surprise, of tragedy. A shyness about emotion.”

In addition, as the state manager notes that the town is putting in a new bank with a time capsule (so popular in those days), and that this play can serve as a corrective to all the “official” stuff: a record of everyday life.

And so the play is, in a way. But it isn’t just a snapshot of small-town New England and its ordinary folk denizens. It actually carries a modern (and timeless) message about the importance of valuing everyday life, and living in the moment.

The play is in three acts. The first is that snapshot of two families in Grover’s Corners, those of prominent but not wealthy citizens: the doctor, and the newspaper publisher. Their children are tweens and teens, and it is clear that the doctor’s son may have a crush on the publisher’s daughter. One of the questions from the “audience” and the response are rather amusing.

LADY IN A BOX: Oh, Mr. Webb [the publisher]? Mr. Webb, is there any culture or love of beauty in Grover’s Corners?
MR WEBB: Well, ma’am, ther ain’t much--not in the sense you mean. Come to think of it, there’s some girls that play the piano at High School Commencement; but they ain’t happy about it. No, ma’am, there isn’t much culture; but maybe this is the place to tell you that we’ve got a lot of pleasures of a kind here: we like the sun comin’ up over the mountain in the morning, and we all notice a good deal about the birds. We pay a lot of attention to them. And we watch the change of the seasons; yes, everybody knows about them. But those other things--you’re right, ma’am,--there ain’t much.--Robinson Crusoe and the Bible; and Handel’s “Largo,” we all know that; and Whistler’s “Mother”--those are just about as far as we go.

This is a fun link to The Moonstone and the use of Robinson Crusoe as a sacred text.

In the second act is the wedding between George and Emily, with a flashback in the middle to how they realized they loved each other. This act is pretty emotionally complex, with both George and Emily appearing afraid of marriage and commitment at the last moment, revealing their feelings to the audience through monologues with the scene frozen.

Personally, this felt weird to me, because my own experience with marriage was so different. Neither of us had anything resembling cold feet or fear about marriage. (Irritation at the wedding planning process yes - we have agreed to elope if we ever renew our vows…) We weren’t naive, either. We both knew each other well, and had both good judgment and great chemistry on our side. Likewise, there was no fear of the honeymoon. And we had a blast in every possible way. Obviously marriage isn’t one long ecstasy - we have had our tough moments too - but we both have had more fun than we expected too.

Perhaps one telling exchange here is in the incident where George and Emily realize they love each other. George has been so focused on baseball that he has gotten a reputation as stuck up. Emily calls him out, and he feels the weight of it.

EMILY: I always expect a man to be perfect and I think he should be.
GEORGE: Oh . . . I don’t think it’s possible to be perfect, Emily.
EMILY: Well, my father is, and as far as I can see your father is. There’s no reason on earth why you shouldn’t be too.
GEORGE: Well, I feel it is the other way round. That men aren’t naturally good; but girls are.
EMILY: Well, you might as well know right now that I’m not perfect. It’s not as easy for a girl to be perfect as a man, because we girls are more--more--nervous.--Now I’m sorry I said all that about you. I don’t know what made me say it.

This is a well-written exchange. Both are expressing flawed views - based on gender essentialism of course - that interfere with their ability to really see the other. But they are still a good match, and legitimately good kids. Wilder handles dialogue like this in such an understated way, but with a lot more nuance when you think carefully about it. A good pair of actors could take these lines in different directions, for sure.

In the third act, we learn that thirteen years later, Emily has died in childbirth (sorry about the spoiler, but the play is 80 years old…) Several of the other characters are dead now as well, and resting in the graveyard. They are conscious, but waiting. Not waiting for judgment, but for the future. A future when they will see clearly and become most themselves. This is in contrast to the living, who live “in closed boxes” - caskets of their own, where they cannot see the big picture. Emily goes back to her twelfth birthday (against the advice of the other dead), and receives not pleasure, but horror at seeing how everyone fails to live in the moment, but are so distracted as to not really see or hear each other.

This is the bit that I mentioned above that probably seemed controversial at the time. Wilder explains in the other materials, however, that it wasn’t his idea exactly - it’s from Purgatory. (Wilder does not appear to have been religious in the usual sense, but the play itself assumes some sort of transcendence and religious truth.) The positive vision of the future as the time when we all see clearly face to face rather than darkly through a glass is why I cannot say the play is in the least pessimistic. It is rather positive overall.

The ending differs in the movie: Emily turns out to have dreamt of her death instead, and she is given a chance to live with the insight. The correspondence between Wilder and Lesser discusses this change - which Wilder approved of completely. In his view, the screen and the stage were different, and expectations were different, and killing a beloved character didn’t fit with the message of the play when done on screen. In the stage version, Wilder felt that it was clearly metaphorical, and the death of Emily was easily seen as a “death comes for us all” moment.

By the way, the correspondence is fascinating. The portion reprinted was selected to represent the discussion of bigger ideas, rather than fine details, but there is a lot left of the viewpoints of the two men regarding the differences between stage and screen, particularly the different ways to convey the sense of the whole town from scenes which see only small places. Both men clearly care about the final product - and see it as fine art, not mere flashy entertainment. They both are congenial and admire each other. It was a good working partnership.

It would be interesting to see Our Town on stage some time. Perhaps one of our local theater groups will take on the challenge someday.

One final note: Wilder is one of a very few who have won three or more Pulitzer prizes, and the only one to have won for both drama and a novel. Our Town was the second of the three. His 1927 novel The Bridge of San Luis Rey was the first, and the third was the play The Skin of Our Teeth. Both are on my eventual reading list.

Posted by Diary of an Autodidact at 2:43 PM