When it became obvious that Covid-19 would shut down most non-essential things in my town, I realized I should probably grab a few books to keep me occupied until the library reopens. One of those books was this biography of Philip Larkin, which sat there on the new books shelf tempting me for a few weeks. 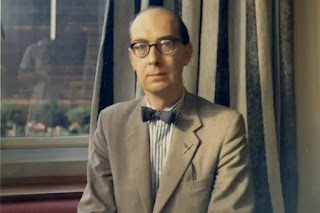 One of Philip Larkin's numerous photographic self portraits.

While Larkin’s skill as a poet has never really been in doubt, at least during my lifetime, his reputation as a person has been much more dubious. So therefore, one of the key questions any biography is expected to answer is, “How much of a prick was Philip Larkin?” Having read this book, I think one obvious answer is, “Not nearly as much of a prick as Kingsley Amis.”

But actually, I am not convinced Larkin deserves his bad reputation. There are a few things which contributed to his reputation as a bit of a jerk. First was that toward the end of his life, he “performed” his character in interviews and the like - his role as the crusty old man, librarian and poet. This included acting as if he was a reactionary conservative, which is, ironically, rather the opposite of his actual political views.

The second problem for Larkin is that he corresponded extensively with various friends and relations, and these letters were mostly preserved. Thus, when he writes to Kingsley Amis, he will often make a tasteless sexist joke (like they would have made at school in the 1930s). He might make a racist statement to a friend in a context that was probably understood to be sarcastic, but which scans poorly by itself.

The third issue I think has perhaps faded along with changes in society. Larkin never married, although he was in a long term sexual and romantic relationship with Monica Jones, while having quasi-romantic, romantic, or sexual relationships here and there with other women. His refusal to marry (and he most certainly did not wish to - he was clear on that), has been read as being a character flaw, which seems more unfair now that marriage is no longer considered the only reasonable choice for people.

All of this came to head in Andrew Motion's biography published soon after Larkin's death. Booth's more recent biography seems written in significant part to correct the picture of Larkin as a monster that Motion painted.

There is plenty of evidence that Larkin was a better man than his reputation as well. Those who worked with him, the women in his life, and his friends had positive things to say about him. One that particularly struck me was his reputation in his day job, Librarian at the University of Hull. In an era when professors routinely ogled and harassed the female staff, Larkin was notable for not doing so, treating his co-workers and underlings with respect and fairness. Far from being the cantankerous old man, he was a great boss with a sense of humor, excellent work ethic, and considerate of his staff.

James Booth worked with Larkin near the end of his life, and conducted extensive interviews in writing this book. His background in poetry led to the decision to include a decent amount of poetic analysis in the book, as well as the biographical details. The book is well written and rather fascinating to read, although not everyone will find Larkin as interesting, I suppose. I enjoy poetry (as this blog makes pretty clear…), and like reading about complex personalities.

Larkin is notable for being one of the very few 20th century poets who held a nine-to-five job with no expectation that he would ever write for a living. The other that the book mentions is Wallace Stevens, the insurance executive. This reality was both positive and negative for Larkin. He resented that he felt tied to his job, and became increasingly overworked and frustrated as budget cuts and new technology added to his stress. On the other hand, he was clearly very good at his job: people who knew him primarily as a librarian have insisted that he was underrated in that capacity. There is no question that he greatly expanded the Hull library, collecting countless historically important documents, and organizing the collection.

There are definitely some fascinating details about Larkin in this book that I did not know. For example, he truly desired to write novels at first, before he capitulated, realizing his talent was in poetry. But he did write a few “lesbian fiction” novels under a pseudonym in his early twenties. I was completely unaware of them - Booth quotes some passages and so on, which was kind of interesting. I’m not sure I will be seeking them out, but it is definitely a side of Larkin that isn’t as well known.

Larkin was steadfastly as non-political as possible throughout his life. He appears to have, at least in part, intended to avoid making the library appear partisan. But he also disliked politics at a visceral level (something I feel too), and had complications from his love life that incentivized a non-partisan approach. Monica Jones was pretty conservative, while Larkin was to a significant degree liberal. To preserve their relationship, they stayed away from most discussions.

This is, indeed, the same twisted version of “civil and religious liberty” that the increasingly dominionist Evangelical-Industrial Complex believes in. Cram their bigoted interpretation of an ancient book down the throats of everyone else using the full force and violence of law and government.

Larkin was a steadfast atheist throughout his life, and was particularly distrustful of religion as proxy for sectarian politics or as a way to fleece the faithful. Booth quotes a bit from “Faith Healing,” which is such a great poem, I decided to quote it in full here:

Slowly the women file to where he stands
Upright in rimless glasses, silver hair,
Dark suit, white collar. Stewards tirelessly
Persuade them onwards to his voice and hands,
Within whose warm spring rain of loving care
Each dwells some twenty seconds. Now, dear child,
What’s wrong, the deep American voice demands,
And, scarcely pausing, goes into a prayer
Directing God about this eye, that knee.
Their heads are clasped abruptly; then, exiled

Like losing thoughts, they go in silence; some
Sheepishly stray, not back into their lives
Just yet; but some stay stiff, twitching and loud
With deep hoarse tears, as if a kind of dumb
And idiot child within them still survives
To re-awake at kindness, thinking a voice
At last calls them alone, that hands have come
To lift and lighten; and such joy arrives
Their thick tongues blort, their eyes squeeze grief, a crowd
Of huge unheard answers jam and rejoice—

What’s wrong! Moustached in flowered frocks they shake:
By now, all’s wrong. In everyone there sleeps
A sense of life lived according to love.
To some it means the difference they could make
By loving others, but across most it sweeps
As all they might have done had they been loved.
That nothing cures. An immense slackening ache,
As when, thawing, the rigid landscape weeps,
Spreads slowly through them—that, and the voice above
Saying Dear child, and all time has disproved.

As an indictment of that particularly American form of religion, it is surprisingly perceptive. I spent time in the charismatic movement during my teens, and, while there was a lot I liked (for example the racial integration and openness to emotion), there was also a troubling culture surrounding the “healing” stuff that appealed to emotionally damaged women in particular, and also attracted creepy-ass guys as the “healers.” Not exclusively, obviously, but to an uncomfortable degree. The last stanza is particularly intriguing, with Larkin’s empathetic yet damning illumination of the all-too-easy switch from living a life of love to seeking a cure for being unloved.

“Faith Healing” isn’t particularly snarky, but Larkin could be pure acid when he wanted to. One line that particularly caught my eye was from a letter to Anthony Thwaite, declining to review Robert Graves’ latest book. “[I]f he says publicly just once more that he has a large family to support, I shall write to the papers asking whose fault he thinks that is.”

Or how about this one? When he sent a donation to “Friends of Dove Cottage,” he was informed that he had been made a life member. He replied, “In fact I was similarly enrolled a few years ago, when I made a similar generous donation, as you so kindly put it, so I now have the distinction of being a life member twice over. I very much fear, however, that they will have to run concurrently.”

These are just a few of the delightfully witty lines in the book. Larkin was complex, to be sure; more accurately, he was human, with all the virtues and faults that come with humanity. Reading this book very much made me eager to dive more deeply into his poetry. Hardbacks of his Complete Poems are irritatingly expensive, so I will have to either watch for a bargain or make it a rare splurge.

In any event, I can highly recommend James Booth’s biography for fans of poetry in general and Larkin in particular.

I should note that one of the reasons I got into Larkin in the first place is because of Clive James.

Posted by Diary of an Autodidact at 12:55 PM