Source of book: I own this. A gift from my in-laws.


In case there was any doubt, I love Clive James. One of the first books I reviewed for this blog (back when it was just notes for friends and family posted on Facebook) was Cultural Amnesia, which in turn introduced me to a panoply of other authors and ideas. For me, James falls in that rare category of writer who could write about anything and make it interesting with his wit and broad knowledge. 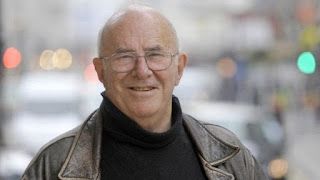 Poetry Notebook is quite different from the other, of course. Rather than short essays on cultural and political figures of the 20th Century, it offers reflections on poetry in general along with discussion of particular poets.


I should say at the outset that it was clear within a few paragraphs that James and I would agree on one central point: Robert Frost was a genius, and one of the greatest poets of all time. (The complete Frost makes James’ list of five favorite poetry books.) You may agree or not, but Clive and I have made up our minds. This isn’t for the reason many would give, which would be a dislike for modern poetry. James is a traditionalist in many ways, but this book highlights many moderns, and he praises them where due. His favorites skew modern as well. That said, James believes (as do I) that form can itself add to the music of a poem, and should not be dismissed as affectation or something that detracts from the real thoughts of the poet.


“The elementary truth that there are levels of imagination that a poet won’t reach unless formal restrictions force him to has largely been supplanted...by a more sophisticated (though far less intelligent) conviction that freedom of expression is more likely to be attained through letting the structure follow the impulse.”


Blake goes on to mention Picasso - who had amazing technique long before he defied the conventions of art. (A collection of his sketches came to our city a decade or so ago. The man could draw as well as anyone I have seen.) I would also mention such musicians as Fritz Kreisler who cultivated an air of spontaneity, but who were true masters of violin technique. Go listen to a beginner if you doubt this.


This book probably isn’t going to be particularly interesting for people who hate poetry. It might also be a bit esoteric for those who might enjoy a poem here or there but lack the knowledge of structure or the love for the sound of language that would make James’ observations make sense. For myself, I love poetry and language. I love how the best rolls off the tongue and sounds as it splashes upon the ear. I appreciate the craft that goes into making good poetry - and even bad poetry for that matter. I tried my hand at it in my teens, starting with a school assignment. Alas, although I could write poems that fit patterns and had the technical components in place, it was clear to me that I didn’t have the ear for the music. (Could I have become competent with practice? Possibly. But it surely didn’t come naturally at all.) James too has written poetry, although he doesn’t seem to think highly of it either. But James can wield the English language.


I made quite a few notes while reading this, and found that many of them were little snippets of wit and perceptive observations. In essence, what James is best at.


For example, in the opening section, while discussing his own attempts at abstract poetry - which he got published - he says:


[L]ike abstract painting, abstract poetry extended the range over which incompetence would fail to declare itself. That was the charm for its author.


Or this one, about his youthful enthusiasm for Ezra Pound, which faded as he grew older.


When I fell out of love with The Cantos I fell all the way out, but one of my critical principles, such as they are, is to take account of the history of my critical opinions, on the further principle that they have never existed in some timeless zone apart from the man who held them, but have always been attached to him, like his hair, or, lately, like his baldness. There is a promising analogy there, somewhere: my hair yielded baldness as my enthusiasms yielded disenchantment. First the one thing, then the other, and the second thing clearly definable only in terms of the first.


He has a real point there. For myself, I too have become disenchanted with many of my youthful ideas. But they too were me - the me I was then - and now my disillusion is often definable in terms of the first enthusiasm. A promising analogy indeed.


His dissection of Pound is worth the read. On the one hand, there are moments. (James’ central theory of great poetry is that it contains “moments” which affect the reader in some way. It is those that take the poem from competence to transcendence.) On the other hand, there are some clunkers. Like the line “Sunset like the grasshopper flying.” As James points out, sunsets aren’t like this, and the stab at the concept of evanescence is imprecise at best. The line obscures rather than enlightens.


This is my issue with much of modern poetry - at least that by less skilled poets. There is a tendency to mistake vagueness for profundity. And they are not the same thing. As noted above, incompetence hides better in abstraction.


Traditionalist poets do not come away unscathed, however. Swinburne is described as “the most accomplished poet that I couldn’t stand.”


[Interesting side note: In This Side of Paradise, reviewed here, Fitzgerald’s self-absorbed autobiographical character turns from Chesterton to Swinburne as he “matures.”]


Journalists too get the barbs, with the editors of a certain newspaper were described as “the kind of journalists who aren’t talented enough to be terrorists.”


James’ humor is often dry, and his zingers can be thoroughly memorable. For example, his point that there has to be something to distinguish true poetry from poetic prose.


Usually, for evidence, we need a stanza...By that measure, the author of the scurrilous ‘Ballad of Eskimo Nell’ was a poet, but Jack London was not. They both wrote poems about the deadly rigours of the frozen North, but Jack London, though he longed for success as a poet, never wrote a stanza that anyone wanted to remember: his whole gift was for prose. Thus, poor guy, he was condemned to fame and wealth: a fate that most poets avoid.


Clive James is in his 70s, and has been more or less dying from leukemia for a few years. I say more or less, because he has far outlived his own expectations. As he said recently, “Still being alive is embarrassing.” And yes, he is still writing bits for The Guardian on Django Reinhardt and Keats and so on. What I find particularly intriguing, though, is his self-awareness of his age and frailty - and also of the tendency of critics to ossify as they grow old. Certainly, he thinks he has more to say now that he has experienced more, but he also realizes that there is more to come - even after he is gone.


That is so beautifully put.


Another meditation on aging comes at the end, in the decidedly bittersweet reflection that he will never be able to do or write all he intends.


A dangerous point arrives when you tell yourself that you are still proud of your memory. It means your memory is failing.


I have seen this all too often in my elderly clients - it just goes with the job. The last stage before full dementia is often a clinging to the idea of a good memory. But this does bring to mind an incident from a long conservatorship trial I did a decade ago. This one doctor was called to testify about the mental capacity of a patient going back several years. The doctor bragged about his memory, but couldn’t remember diddly squat. The judge, in chambers with the attorneys after the testimony, confessed he was sorely tempted to say “I find that the witness’ memory is ’merely average.’”


Just a few more. James talks at length about the fact that few people, let alone artists of any kind, qualify as pure and good. All have flaws, sometimes glaring.


Luckily not even America - still a puritan culture in which an artist’s integrity must be sufficiently unblemished to impress Oprah Winfrey - has proved entirely devoid of critics and academics who can handle the proposition that the creator of perfect art might be a less than perfect person.


James doesn’t quote at length, usually just a line or two. But he does quote this one in full. It is by Samuel Menache, who I confess I had never heard of. But this poem is beautiful.


I’ll end with some music, and a quote thereon. During his younger years, James would play disks at parties.


To sit beside the radiogram and load the discs was a position of power. It was an era when the female students were spraining their hips trying to dance to the title track of Dave Brubeck’s hit album Time Out: a few minutes of gyrating in 5/4 time could have dire effects on a foundation garment.


Without further ado, “Take Five.” Dance your undies into disarray. Or something like that.
Posted by Diary of an Autodidact at 8:57 PM