This is a collection of short stories aimed at children. We have listened to and enjoyed a decent bit of Terry Pratchett over the last year. I picked this one because it was short enough to work as a second book for a trip in which I had already chosen Three Men In a Boat for the longer work. 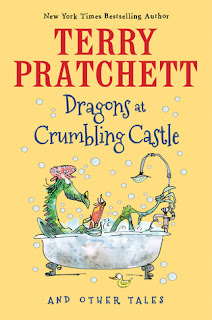 As usual, these were fun and entertaining, yet thoughtful. In other words, typical Pratchett. I would say that I am coming to the conclusion that my kids will probably learn more useful skills in ethical thinking from Terry Pratchett books than most other sources. All the most important ideas I would like to teach them are there. Empathy, selflessness, listening, alternatives to violence, the complexity of the real world, power and privilege. It’s all there, along with a wry critique of flawed institutions. And overlying it all, good humor and charity toward all.

As has been my practice with many of my short story collections, I want to say a bit about each one, in the order they appear. Mostly.

Well, what is a king like, say, King Arthur to do, if all his knights are out on quests or on vacation to the Riviera and there are dragons to be dealt with? The young page is the only one left, so he is sent out to do what he can. Along the way, he picks up a knight who tries to make up for his small size with giant armor, and a wizard who can’t quite seem to get the right spell when he wants one. And then, most puzzling of all, when they get there, the dragon says “good day.” And you can’t very well kill someone who just said “good day” to you, right?

This is a very typical Pratchett scenario, where expectations are turned on their heads, and those who listen and think have a better shot at solving a dilemma than those who rely on violence and bluster.

A really funny bit in this story is the idea of the town criers as the early form of newspaper. The crier would yell the headlines, while the pages (sorry, blame Pratchett, not me) would fill in the details. So, “Dragons at Crumbling Castle!! Listen to Page 9 for the details…”

This one is a nod to Dr. Seuss’s classic The Butter Battle, except about the space race instead of the arms race. And, in typical Pratchett manner, the wizards...I mean scientists (just about the same thing, really, in good fiction) get stuck accidentally with the kings of their respective nations on their historic spaceflights to a nearby dust speck. Naturally, the kings get into a dispute about who has the better claim to the new speck, while the poor scientists are stuck figuring out how - and if - they can get back. 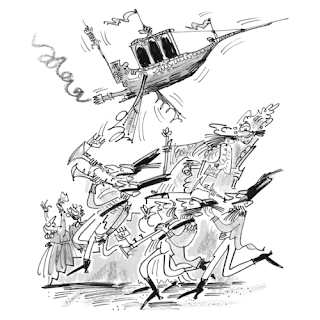 This is the shortest story in the bunch, and is basically a joke setup. The great warriors and hunters set out to catch the elusive Snorry. Never mind that nobody knows what one looks like. I won’t spoil the ending.

“Tales of the Carpet People”

We actually had heard this one before. Pratchett wrote this very early on in his career - as a teen, actually. It grew into his first novel, The Carpet People, which was my kids’ introduction to Pratchett. At the end of that book, the original short story was included. The characters are far more fleshed out in the book, and the plot is more interesting. Nevertheless, the short is fun, and my kids were thrilled to hear it again.

“Another Tale of the Carpet People”

This one actually appeared several stories later in the book, but I put it here. Because reasons.

Anyway, this one was not one we had heard before, and my kids were happy to hear that there was one they had not heard yet. In this one, set after the great migration of the Mungrungs to the other side of the carpet, Snibril and Bane set off to “sail” across the great linoleum to the mythical land of Rug. As usual, the world is delightfully developed, and Pratchett foreshadows the use of everyday objects in the novel he would write later.

This is another fairly short one, and probably the one I liked the least. Basically, a tortoise escapes his pen to the larger world. Not bad, but not as imaginative as the others.

Pratchett often pokes fun at human development, and this is one of the more witty shorts for that reason. Back in the day, when cavemen were just trying to get by, Dok had his heads in the clouds, always coming up with inventions that would “revolutionize” some facet of existence. The wheel would revolutionize transportation, naturally, but fire would “revolutionize central heating” and other such peculiarities. I wish I had a hard copy of the book to look more of them up, but they were fun. The problem is that Dok as often as not fails to bring his inventions to the true level of development necessary to make them actually useful. And he is undoubtedly clumsy, which doesn’t help. Nevertheless, he makes progress which will prove necessary to the survival of his tribe.

Pratchett is on to something here. It is fashionable - and always has been - to make fun of scientists and inventors, particularly when the first attempt is less than spectacular. Transistors were once dismissed as a curiosity, but here I am typing this on a computer containing billions of them smaller than the human eye can detect.

A bit of a steampunk fantasy, where all the usual appliances ran on steam rather than electricity. This leads to a big race between the partisans of the various forms of energy storage. So, in addition to the usual steam and gasoline vehicles, you had ones that ran on clockwork, electricity, and rubber bands. A bit of a fun twist at the end too.

One of two stories featuring the fictional town of Blackbury (presumably named after Blackbury Camp, a British historical site from the 4th Century BCE.) Blackbury and a neighboring town compete in the ancient ritual of “egg dancing,” which is taken all too seriously. But then, the opposing champion falls in love with the daughter of the mayor of Blackbury and asks for her hand in marriage, complications ensue. Her father will only consent if he throws the match.

There is a lot of humor in this story, but the best part is the description of the thieve, who drive a car carefully decorated - like a police car, but, well, like its opposite - to clearly broadcast who they are.

Another one I have taken out of order. The town of Blackbury again becomes the focus of a story in which the mayor decides that Blackbury needs a tourist attraction, and invents a “monster” along the lines of the Loch Ness Monster. Except that it has to live in the town pond. And it is made of tires dragged around by the town gardener. Blackbury reaps the whirlwind, however, as the character of the town is ruined by all the tourists. And then, a real monster shows up…

Another knight trope turned on its head. Edwo is the youngest prince, and is insufferable, because he likes to discourse endlessly on a variety of brainy topics, putting everyone to sleep. This turns out to come in handy at times, though, as he pursues the hand of a captive princess.

There actually is a route 59A. I suspect I miss a bit of the humor here, because I don’t have a place to associate with the story. However, it is still a fun concept. The bus finds itself time traveling, to Roman times, the days of Arthur, and a peculiar prehistoric time (which is an anachronism because it contains primates along with the dinosaurs.) Some things that were interesting to me: first, Pratchett utilizes a female bus driver, who has to repair a tire; and a trainee who is a Sikh, and who has to utilize his knowledge of Latin to communicate with the Romans. This is definitely a modern way of handling a story. Second would be the idea that when the bus (or other vehicle, as it turns out) runs out of fuel, the occupants end up stranded in that time and place. A bit disconcerting to those to whom it happens.

This one is thoroughly silly, but with some unusual twists. Pratchett sends up the explorer trope, the wealthy person who dabbles in adventure to escape boredom, the action movie genre, and selfies. (I think this was written before selfies became a thing, but he anticipates it. Although I suppose the practice of putting “devil’s horns” or, as we call them here, rabbit ears, on others in pictures is likely as old as the art of photography.

“Father Christmas Goes to Work At the Zoo”

Yep, the problems that arise with poor Santa trying to get a job in between Christmas seasons. The problem is, his instincts to give stuff away, make animals fly, and decorate everything for Christmas don’t work too well in the everyday world.

This is a fun collection of lighter stories. As I said, aimed at children, so thoroughly useful for the small fry. I love Pratchett’s ability to blend absurd humor, world building, and serious philosophical and moral themes into tales that go down easy and yet make one think.

The audiobook was read by Julian Rhind-Tutt, who was fine, but not particularly memorable. Nothing wrong with his reading, but I didn’t adore it like, say, Jonathan Cecil reading Wodehouse (link).

Previous Pratchett books we have read or listened to:

Posted by Diary of an Autodidact at 11:26 PM