Three Men In A Boat (To Say Nothing of the Dog) by Jerome K. Jerome

Source of book: I own this, but we listened to the audiobook read by the late Frederick Davidson

It is always an exciting moment when you can introduce your children to a beloved classic. I discovered Three Men In A Boat (To Say Nothing of the Dog) rather late in life, about 10 or so years ago, and knew that some day, it would be appreciated by my kids.

Three Men In A Boat was originally conceived as a serious travelogue giving the reader useful tips for planning a boat trip up the Thames from Kingston to Oxford. Thus, the book contains interesting historical notes on the various towns, and Magna Carta Island (allegedly where King John signed the document) among other features. However, as the book was being written, Jerome seems to have realized that it was the humorous stories about trips taken by himself and his friends that were the best part of the book. Thus, these were expanded, and became the best part of the work. 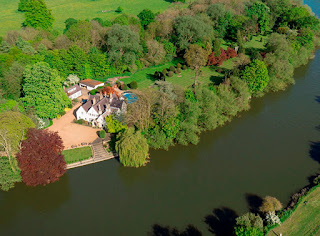 Magna Carta Island. Believe it or not, it was up for sale a couple of years ago.

At the outset, the author takes great pains to stress the absolute veracity of what he writes. Obviously, this isn’t entirely true, but there is a certain earthiness that reveals Jerome’s personal experiences at the heart of the tale. His companions represent real people. “George” was George Wingrave, who later became a senior manager of Barclay’s Bank. (Jerome describes George’s job as taking naps at the bank.) “Harris” was Carl Hentschel, who founded a printing business. And “J,” naturally, was Jerome himself. Montmorency, the dog, was the truly fictional character, although the author believed that there was a bit of the canine in all Englishmen.

From the very start of the book, the author makes it clear that he will be pretending to be objective while skewering his companions and himself mercilessly. The three are sitting around in a general malaise, discussing what is wrong with them. J is certain - having read a medical dictionary cover to cover - that the only known disease he lacks is “housemaid’s knee.” His doctor doesn’t agree, however, and recommends nutritious food and a pint of beer each evening. So, they eventually agree that it is all due to overwork, and decide on a two week vacation. After rejecting several options, including a sea voyage (Jerome’s descriptions of seasickness are hilarious), then decide to take a camping skiff up the Thames.

Interspersed with the details of the trip are a variety of anecdotes and digressions. Some, such as the sad tale of a single mother who committed suicide, read like Victorian purple prose, but others seem there solely for entertainment. The kids particularly liked the story of Uncle Podger and the chaos he caused in the hanging of a picture. Other bits include some stock jokes like the plaster trout and banjo jokes.

Probably the most popular bit was the description of the Irish Stew, which the boaters make using leftovers. My older four kids can cook in varying degrees - the oldest two can do everything themselves - so they listened to the ingredient list carefully. Leftover beef and lamb pies? Good. Various vegetables, even better. But when the leftover smoked salmon was added, there were some titters. This particular addition was, shall we say, not universally approved. But then, this followed:

I forget the other ingredients, but I know nothing was wasted; and I remember that, towards the end, Montmorency, who had evinced great interest in the proceedings throughout, strolled away with an earnest and thoughtful air, reappearing, a few minutes afterwards, with a dead water-rat in his mouth, which he evidently wished to present as his contribution to the dinner; whether in a sarcastic spirit, or with a genuine desire to assist, I cannot say.

To the extent one can roll on the floor while seatbelted in, we did so.

Three Men In A Boat was not greeted with universal applause. The critics were mostly hostile, railing against the book for its “vulgar” use of slang, among other faults. As has been the habit of critics from time immemorial, they castigated the author for appealing to the tastes of the lower classes. The book sold, however, and sold well. Since its appearance in 1889, it has never been out of print.

For those who like to live their books, this one is a real gem. One can easily recreate the trip. In fact, the travelogue portion has stood up extremely well, as the inns and pubs named in the book are still open for business 125 years later. Hooray for British resistance to change, or something like that. For what it’s worth, the only bit of this book that I have personally experienced was a half hour of punting at Oxford back in my law school days. This does seem like the sort of thing I would have done, in another place and time. Should one wish to recreate this trip, you can indeed rent camping skiffs. Many date back to Jerome’s days. A truly authentic experience, at least if you can bring your own fox terrier. 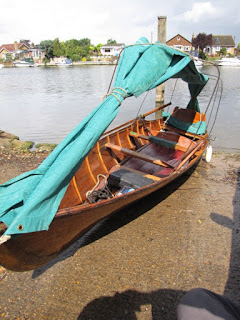 One caution about this book would be that it does reflect certain Victorian attitudes, such as a degree of condescension toward women - something not lost on my older daughters, who were eager to point out that they would have been perfectly competent to row or tow a skiff. I have no doubt that they are right. But these are ultimately a minor fault, and one common to much of the history of literature, alas. It made for a good discussion, however, of just how much things have changed. (This was aided by the true stories we learned during our exploration of California’s Gold Country on this trip.)

I can recommend this book as a classic of British Victorian humor, and one that children can enjoy as well. There are a number of well-regarded audiobooks of this work, including one by Hugh Laurie. Frederick Davidson did a fine job on this one, enhancing the experience.
Posted by Diary of an Autodidact at 10:26 AM