The Art of War by Sun Tzu

Source of book: I own this. A gorgeous hardback edition of Classics of Eastern Thought from Barnes and Noble I got for Christmas a couple of years ago. 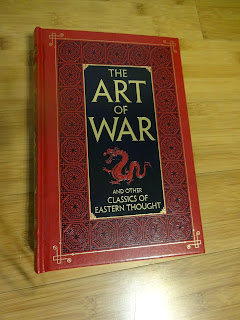 My brother had a copy of The Art of War in translation when we were teens. I read a bit here and there, but I recall that he was more into it at the time. This was natural because he was a serious war buff, and still can talk circles around me on history and strategy and so on. I also recall a computer game with the same name, with strategy and tactics based on the book. Likewise, technology was of the same era.

Anyway, I decided to go ahead and read through the entire book and see what I thought.

First, let me mention that the version I have was translated by Lionel Giles, assistant curator of the British Museum. This is the classic 1910 translation, so most of the phrases will be familiar even to those who are unaware of the original source. Giles also provided selected commentary on the book, bringing together the various Chinese commentators throughout history.

It is certainly interesting to read a book of this age about war. Some things have clearly changed. The development of various technologies from artillery to motor vehicles changed the nature of warfare - to say nothing of aircraft and true navies. Likewise, the modern political reality of modern states rather than tribal and regional chieftains has changed the nature of war. On the one hand, war can be horribly destructive in a short time. On the other, the costs of war and the unwillingness of populations to sustain absolute warfare for any extended period have made war both less frequent and more costly.

Still, much of this book fits the modern world better than one would imagine. Perhaps unsurprisingly, the art of war and the art of politics have some overlap, and one can see a creative application of the principles that Sun Tzu set forth in modern negotiation tactics. Since Sun Tzu dedicates much of the work to the preparation for victory rather than the battle itself, the principle of winning the battle without fighting translates well to a variety of areas. I might mention in particular, the realm of law, in which I do battle.

The book itself dates from the 5th Century BCE. Whether Sun Tzu ever existed is a matter of debate, as the name can be interpreted simply to mean “The Fugitive Warrior.” On the other hand, there is some evidence of a person that may have been behind the book.

There is no doubt that this work has been influential. The history of Eastern warfare, particularly that of ancient China and Japan is filled with examples of strategy taken from The Art of War. In more modern times, Douglas MacArthur was a fan, while the Viet Cong used many principles from the book. One might even say that the failure of the Western forces to understand the principles led to the involvement in Vietnam in the first place.

There are a few aphorisms that stood out to me as applicable to our modern questions of war.

First is this: Sun Tzu lists as his first consideration in determining the conditions who has the backing of the Moral Law? In Sun Tzu’s time, this was important, but in our own time, it has become of paramount importance, thanks to the concept of the “Just War.” Fighting for economic advantage is no longer considered a viable reason for war, at least for most of the democratic nations. Thus, to gain the support of the populace, a leader must convince that the moral high ground lies with his side.

Another one, not as well observed as of late, is this:

II (2) When you engage in actual fighting, if victory is long in coming, then men’s weapons will grow dull and their ardor will be damped…

(3) Again, if the campaign is protracted, the resources of the State will not be equal to the strain.
…
(6) There is no instance of a country having benefited from prolonged warfare.

Another section that made a lot of sense was the one on stratagem rather than brute force.

One can see this both in the case of war, where there seems to be a whole segment of the political spectrum (here in the US) that is more interested in “making the sand glow” than in winning battles without destroying everything. (For all the failures of the George W. Bush administration, he seems to have at least intended to capture intact and co-opt the populations to our side. The latest group seems more intent on killing as many as fast as possible.) In my own law practice, I have found that resolving divorce cases in particular is easier where my client is willing to allow the other side to keep dignity and self image intact. (As I say often, let him/her feel like they won something, and they won’t need to fight you on everything.)

Another one stood out, not so much for war-related reasons as for musical ones is this:

V (7) There are not more than five musical notes, yet the combinations of these five give rise to more melodies than can ever be heard.

Sun Tzu also lists five colors and five flavors. But it is the musical one that is particularly interesting.

We here in the West tend to think either in diatonic terms (7 notes, A-F) or in chromatic terms (meaning a total of 12 distinct pitches.) For the ancient East, however, there were five, which we refer to as the pentatonic scale. (For those non-musicians, C-D-E-G-A.) Actually, the pentatonic scale is heard all over the world, and has become the basis of much of rock and blues in our own pop tradition. I will specifically mention the hymn Amazing Grace as a use of the pentatonic scale, but that is just an easy example. The use of the minor pentatonic, C-D-Eb-G-A, over a major chord structure is the basis of too many rock solos to count, and the addition of “blue” notes forms the basis of, well, the blues. It is fun, in any case, to see a line between my own experience in improvisation back 2500 years to the other side of the world.

Perhaps one of the most famous lines in the work is this: “All warfare is based on deception.”

This is certainly true in war itself, but often too in negotiation. It can be a successful strategy to hide one’s real aims for a time, allowing the enemy other side to burn their fervor out on a side issue, while subtly winning the main issue.

There is another application, however, that really leapt off the page:

IX (24): Humble words and increased preparations are signs that the enemy is about to advance. Violent language and driving forward as if to the attack are signs that he will retreat.

This holds true in law, I can assure you. But it also is true in other areas. I think particularly right now of both politics and religion. As one can see in the popularity of The Toupee Who Shall Not Be Named and in the increasingly belligerent and aggressive rhetoric the fundamentalist wing of American Christianity, both White Nationalism and Fundamentalism are in panicked retreat in our society, but both have resorted to increasingly violent language and actions. I would consider both a more credible long-term threat if they used humble words. Just saying.

I’ll end with perhaps the most famous of all of Sun Tzu’s aphorisms.

The Art of War is a fascinating book. I originally sought out this collection for this work alone, but I am interested in continuing through the other works. (The Tao Te Ching, The Works of Confucius, and The Works of Mencius.)
Posted by Diary of an Autodidact at 9:50 PM