The Glass Menagerie by Tennessee Williams

This was a production at The Empty Space, a local theater known for its intimate setting and high quality despite low budgets.

The Glass Menagerie was Tennessee Williams’ first hit, and like most of his plays, draws on the dynamics of his own family. This one is perhaps his most autobiographical. I read Cat on a Hot Tin Roof a few years back.

There are only four actors in the play, but, as the narrator - young Tom - explains in the prologue, there is a fifth character, that of the absent father. Tom lives with his mother, Amanda, a faded Southern Belle, and his sister Laura, who is painfully shy and awkward. The fourth character is Jim, one of Tom’s co-workers at the warehouse, who comes to dinner in the second act.

The family is patterned after Williams’ own. His alcoholic father abandoned the family, leaving Williams (also named Tom) to support his mother and older sister. In the play, each of the characters longs to escape their dreary life in an apartment in Saint Louis. Tom, naturally, wishes to get out and see the world - and to write for a living. Amanda dreams of her past glories, when she had so many beaus that they couldn’t fit in the house, and tries to live her life through her children. Laura withdraws into her hobby, a collection of glass animals, the centerpiece of which is a unicorn. 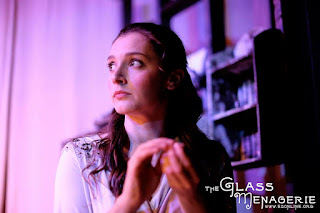 The amount of pressure put on the children by the mother is palpable. As far as she is concerned, Laura has two options: she can either marry, or she will have to learn a trade. When Laura quits secretarial school because the stress makes her vomit, Amanda determines that marriage will be her only option. But how to get a “gentleman caller” to the house, when Laura is so shy? Amanda also has failed to acknowledge that society has changed since her youth, and debutantes don’t just sit around waiting for gentlemen in urban Saint Louis. Laura feels even more pressure because Amanda’s one joy in life is to talk about how popular she was, and how great all the young men were that wanted her. Sadly, she picked a loser somehow, so her triumph always mixes with regret.

Tom, too, is under pressure. His mother is determined that he not be like his father, and is willing to guilt, shame, and browbeat him into submission. She even goes so far as to use Laura as a weapon. These are actions I have seen played out all too often in my divorce cases, and it generally doesn’t end well. Tom escapes by “going to the movies” every night to get out of the house. While movies are likely a part of Tom’s escape, he also has taken to drinking on his nights out.

The transformative event occurs midway through the play, when, at his mother’s urging, he asks his co-worker Jim to dinner. This leads to a flurry of activity. A gentleman caller! This will be Laura’s escape, Amanda is sure. Laura realizes that the young man is one she had a crush on in high school, and refuses to be sociable. Jim is charming and draws Laura out of her shell despite herself. However, things will not end well. (Unsurprising for a Williams play.) Jim turns out to be already engaged, although this comes out only after he has kissed Laura. Tom didn’t know, because Jim had not yet announced it at work, but Amanda reams Tom for this disappointment.

One of the interesting things about plays from this era is that there were quite a number of things one simply didn’t say outright. The 20th Century saw the Hays Code in motion pictures and a similar push in live theater which kept certain topics (including interracial relationships, for example) off limits. In many ways, Shakespeare could say more than American playwrights. Williams nibbles around sex in this play through symbolism. Unicorns in mythology are attracted to virgins. Laura shows her prize unicorn to Jim, who inadvertantly breaks it while dancing with Laura. Deprived of its horn, the horse is now just ordinary. On another level, as my wife pointed out, the unicorn is one example of the theme that each of the characters wants to be unique and special, but end up being ordinary. But the sexual connotation is unmistakeable as well. Laura gives Jim the unicorn as a memento with the hope that he treasures it as much as she did. I think Williams also utilizes a metaphor with Laura, who tells of gathering jonquils with her beaus. Her treasuring of her flowers was an important part of who she was, but once she settled on a particular man, the flowers were gone.

My wife also pointed out that there is a dichotomy between the male and female characters. Both females live in the past. Amanda in her days as a belle, Laura in the innocence of childhood joys, her glass menagerie and her phonograph. The men, in contrast, dream of the future. Tom lives for poetry and making a name for himself. Jim takes night courses in technology and public speaking, with the goal of rising above his menial job. In some ways, all are a dream, but there is hope that the future will be better. The past is just a dead end.

As usual, a few things stood out to me as brilliant concepts and lines. First was Amanda’s inappropriate use of “selfishness” to describe Tom. Her son is free to leave, but only once Laura is married or otherwise provided for. Until then, he must dedicate his life to his mother and sister, and anything less than total devotion is “selfishness.” This is baloney, of course, but Amanda totally believes it. After all, she (in her own mind) lives only for her children. He should do the same. Both in the play and in real life, Tom is torn between this burden and his own dreams. After he finally leaves, he remains haunted by Laura, and she is invited to close the play by blowing out the candles. This wasn’t an appropriate burden for him to bear, of course, but he feels it nonetheless. In real life, this turned tragic in the extreme. His sister suffered from mental illness. Although retroactive diagnosis is difficult, she is believed to have suffered from schizophrenia. In the play, particularly as the actress portrayed her in this instance, she appears to have been on the autism spectrum. Whatever the case, she was eventually forced into a lobotomy, which went terribly and and reduced her to a vegetative state. Williams felt guilty, as he was close to her, but he had no choice if he wanted to have a life of his own. He left the bulk of his estate for her care.

Ironically, though Amanda lives in the past, and devotes her life to correcting her own mistakes, she has one of the best lines about the future.

[To Tom: ] “You are the only young man I know of who ignores the fact that the future becomes the present, the present the past, and the past turns into everlasting regret if you don’t plan for it!”

To an extent, she is right. The problem is that she is the main obstacle to Tom planning for his own future in order to avoid regret.

Earlier in the play, during their first catastrophic fight, Amanda accuses Tom of lying about going to the movies. His response is one that reveals pent up frustration as well as a sense that he has reached the breaking point, and from then on, it is only a matter of time until he leaves.

Tom: I’m going to the movies!

Amanda: I don’t believe that lie!

[Tom crouches toward her, overtowering her tiny figure. She backs away gasping.]

Tom: I’m going to opium dens! Yes, opium dens, dens of vice and criminals’ hangouts, Mother. I’ve joined the Hogan Gang, I’m a hired assassin, I carry a tommy gun in a violin case! I run a string of cat houses in the Valley! They call me Killer, Killer Wingfield, I’m leading a double-life, a simple honest warehouse worker by day, by night a dynamic czar of the underworld, Mother. I go to gambling casinos, I spin away fortunes on the roulette table! I wear a patch over one eye and a false moustache, sometimes I put on green whiskers. On those occasions they call me - El Diablo! Oh, I could tell you many things to make you sleepless! My enemies plan to dynamite this place. They’re going to blow us all sky-high some night! I’ll be glad, very happy, and so will you! You’ll go up, up on a broomstick, over Blue Mountain with seventeen gentlemen callers! You ugly - babbling old - witch…

This is both horrifying, and yet all too deserved. 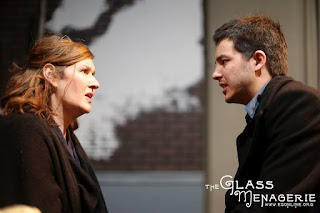 One final line was memorable to me. Amanda, trying to make Laura as “attractive” as possible, stuffs some...stuffing into Laura’s bra.

Laura: Mother, what are you doing?

Amanda: They call them “Gay Deceivers”!

Laura: I won’t wear them!

Laura: Why should I?

Amanda: Because, to be painfully honest, your chest is flat.

Laura: You make it seem like we were setting up a trap.

Amanda: All pretty girls are a trap, a pretty trap, and men expect them to be.

Ouch. And then, the fact that Amanda comes out in her debutante dress, complete with tiara makes the whole thing even more awkward.

I wouldn’t say this is a pleasant play, not in the least. Nearly everything is painful, but Williams brings to light some oft-buried truths about dysfunctional family dynamics. While perhaps exaggerated for most of us - although perhaps not compared with Williams’ own family - the core of truth is still there, exposing the bitter root of pain that can be seen in so many families.

The Empty Space did a fantastic job with it, with excellent acting - particularly considering half the cast is still in college - combined with a minimalist set that focused the action well.