The Long Dark Tea-Time of the Soul by Douglas Adams


I first discovered the Hitchhikers Guide to the Galaxy when I was pretty young. I can’t remember exactly how you, but probably late elementary school. I borrowed my dad’s copy, and definitely did not let them know I was reading it. At least after it became clear that it had a few, um, naughty references. But anyway, it was a lot of fun, even at that age, although I suspect some things went over my head. Later, my brother and I acquired all of the series, and proceeded to reference stuff from it as an inside joke of sorts.


Come to think of it, one of the highlights of my legal career was getting to use the “Somebody Else’s Problem Field” in a case. I got a chuckle from the judge.


A few years ago, I read Last Chance to See, a non-fiction work Adams co-wrote with Mark Carwardine about critically endangered species, but this was my first foray into Adams’ non-Hitchhiker fiction. 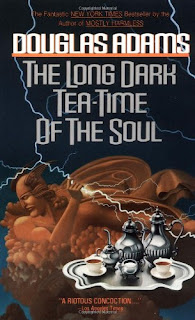 Like the Hitchhikers series, I think you have to approach this book with the same mindset, which is that not everything will be explained, and the last few chapters will be too quick and messy to make sense. Apparently, Adams had a huge problem with deadlines, and tended to dash off whatever he could at the end.


This is the second book in the Dirk Gently series, and I have not read the first, so for all I know, I am missing some background information. The title itself is taken from a line in the third Hitchhiker novel, Life, The Universe, and Everything. A character named Wowbagger, who accidentally became immortal as a result of an industrial accident, has succumbed to endless boredom, the “long dark tea time of the soul.” Since the king of the gods, Odin, features in this book, perhaps this is a nod to immortality.


In any case, here is the setup. Dirk Gently is a self-nominated “Holistic” detective, believing in the interconnection of everything. He is also pretty much an incompetent slob, who takes a number of detective cliches to their extreme conclusion. An incident at Heathrow airport results in the disappearance of an airline clerk and the destruction of a terminal. Meanwhile, Dirk’s client, a record executive who had been complaining about a contract and a green man with a scythe winds up dead with his head rotating on a phonograph. As things unfold, it turns out that Odin made the mistake of signing a contract with a lawyer, his son Thor becomes recalcitrant, and chaos ensues. How will Dirk and his accidental accomplice Kate straighten things out?


There are two reasons that I won’t give away any more of the plot. First, because this is the sort of book that shouldn’t be spoiled. Second, I had to do some research to figure out exactly what the ending was supposed to mean. And even then, there appear to be multiple interpretations.


I do want to quote a few things, though. A good bit of the fun of Adams’ writing is his witty and unexpected lines. The opening paragraphs are particularly good.


It can hardly be a coincidence that no language on earth has ever produced the expression “As pretty as an airport.”
Airports are ugly. Some are very ugly. Some attain a degree of ugliness that can only be the result of a special effort. This ugliness arises because airports are full of people who are tired, cross, and have just discovered that their luggage has landed in Murmansk (Murmansk airport is the only known exception to this otherwise infallible rule), and architects have on the whole tried to reflect this in their designs.
They have sought to highlight the tiredness and crossness motif with the brutal shapes and nerve-jangling colors, to make effortless the business of separating the traveler forever from his or her luggage or loved ones, to confuse the traveler with arrows that appear to point at the windows, distant tie racks, or the current position of Ursa Minor in the night sky, and wherever possible to expose the plumbing on the grounds that it is function, and conceal the location of the departure gates, presumably on the grounds that they are not.


Another great one occurs when Kate (having survived the airport explosion) insists on checking herself out of the hospital, informing the nurses and doctor that the air in the hospital “smells like a vacuum cleaner’s armpit.”


Kate also delivers a line in frustration at Dirk, who very much deserves it.


“I see,” said Dirk. “You have, if I may say so, the air of one to whom her day has not been a source of joy or spiritual enrichment.”
“Too damn right it hasn’t,” said Kate. “I’ve had the sort of day that would make Saint Francis of Assisi kick babies.”


Later, Dirk contemplates the way things have changed since the good old days.


Things had certainly come down a long way since the great days of Faust and Mephistopheles, when a man could gain all the knowledge of the universe, achieve all the ambitions of his mind and all the pleasures of the flesh for the price of his soul. Now it was a few record royalties, a few pieces of trendy furniture, a trinket to stick on your bathroom wall and whap, your head comes off.


Last, there is one of Adams’ trademark descriptions where everything is delightfully upside-down.


Dennis Hutch had stepped up into the top seat when its [a record company] founder had died of a lethal overdose of brick wall, taken while under the influence of a Ferrari and a bottle of Tequila.


Anyway, a fun book, if not quite the classic that the Hitchhiker series is.
Posted by Diary of an Autodidact at 9:12 PM