My second daughter (the mouse and rat fan) introduced me to Richard Peck a couple of years ago, during a long camping trip. We listened to Secrets at Sea, which I thought was the sort of story you would get if Henry James had written a children’s book about mice. Not too long after, we listened to his other mouse book, The Mouse with the Question Mark Tale, which continues the theme of Victorian mice. These two books are fairly recent ones, and a good bit out of character for Peck, who primarily wrote about humans. In any event, the tales were charming and imaginative. A few readers of this blog suggested we explore his other books as well, which we did last year with Here Lies the Librarian, a tale of cars and feminism coming of age. Although my wife disliked the narrator for that audiobook, the kids and I enjoyed the story. 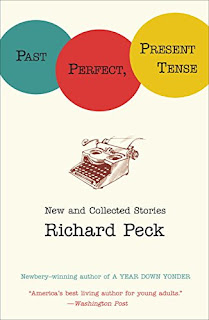 I chose Past Perfect Present Tense for two reasons. First, it was available immediately from our library, without having to request it. Second, because it was short stories, we could stop in the middle if it was too long for our trip. (It wasn’t, though, so we finished it all.)

Richard Peck hasn’t written a whole lot of short stories. For the most part, he is a novelist, as he readily admits. There are thirteen stories in this collection, and they are all he wrote.

In addition to the stories, Peck has included his own introductions to the sections, and his musings on writing in general and short stories in particular. These are quite good, I must say. Here is the opening bit:

A story isn’t what is. It’s what if? Fiction isn’t real life with the names changed. It’s an alternate reality to reflect the reader’s own world.
But what is a short story not? It’s not a condensation of a novel, or an unfinished one. It’s not Cliffs Notes to anything. It has its own shape and profile. It’s not the New York skyline; it’s a single church spire. Its end is much nearer its beginning, and so it can be overlooked.
The short story is much misunderstood. There are even aspiring writers who think they’ll start out writing short stories and work their way up to the big time: novels. It doesn’t work like that. A short story isn’t easier than a novel. It has so little space to make its mark that it requires the kind of self-mutilating editing most new writers aren’t capable of. It has less time to plead its case.

I would agree with him that in many ways, writing a good short story is one of the hardest things to write. Or at least write well.

Peck divides the book into four parts. The first includes only his first story, “Priscilla and the Wimps,” which is about a large girl who takes on a bully and his gang. The second is stories set in the past, the third is ghost stories, and the fourth is stories set in the present day. In general, these stories are aimed at late elementary children or Junior High, perhaps. However, like most good stories, they work well for a variety of ages.

One thing I will caution, however, is that Peck isn’t squeamish. Ghosts require dead people, for example, and thus, people die in unpleasant ways. In one case, it is by suicide. Peck is not at all pro-suicide, of course, but be prepared for the discussion with the kids if you haven’t already had it. Likewise, for one of the stories set in modern times (“I Go Along”), there is a reference to sex, which surely would have made a few Victorians reach for the smelling salts. Actually, it is an amusing line, which caused my tween daughters (11 and 12) to give me an amused smirk.

Being juniors, we also figure we know all there is to know about sex.  We know things about sex no adult ever heard of.  Still, the sight of a pregnant English teacher slows us down some.

Some of these stories ended up being the starting point for full novels. In particular, “Shotgun Cheatham’s Last Night Above Ground” inspired Peck to write more about eccentric older women in A Year Down Yonder and A Long Way From Chicago, while “The Electric Summer” a coming of age tale set at the St. Louis World’s Fair grew into the longer work about the fair, Fair Weather.

I particularly liked “The Electric Summer,” I will admit. The young narrator manages to talk her mother into attending the fair, and the two of them have a grand time that the daughter did not expect. At the end, it becomes clear that both have changed. Life will never be the same for the daughter as she realizes she doesn’t wish to stay on the farm all her life, and the mother comes to peace with the knowledge that she will have to let her daughter go. All too often in fiction and real life, this transition is fraught. I liked that Peck captured the struggles of both characters yet turned the story to a mutual understanding rather than chasm at the end. I have children who will be teens very soon indeed, and my hope is that we can make that transition from parent and child to friends and allies as they mature.

“Shotgun Cheatham’s Last Night Above Ground” is a classic story of the cantankerous old granny taking on the condescending and gullible big city journalist. Peck wrote it for a collection that was themed as stories about firearms. I suspect Peck - who worried that the book would be full of testosterone-drenched tales of manliness - enjoyed tweaking the editor as much as granny. The theme of the ornery old lady returns in “The Three Century Woman.” My wife’s great-grandmother (who passed on recently at 102) was a bit like this sort, asking for a new chain saw for her 80th birthday, and living on her own out in the middle of the Texas hill country into her 90s.

These stories cover a wide variety of settings and moods, but throughout, the characters are memorable and full of nuance. One of the challenges of the short story form is that it is more difficult to flesh the characters out in a small space. Thus, words count, and the little details make all the difference.

Another thing that comes to mind as a positive for me is that Peck, regardless of who his characters are, roots for the little guy. He writes strong female characters and boys who have emotions and adults who treat children with respect.

I am a big fan of short stories, and I was happy to find Peck’s to be solid. Peck is one of those children’s authors that holds enough depth to appeal to adults. His writing is more literary than average, I would say. Not that this is the only sort of kids’ book that is worth reading, of course. But we have enjoyed a number of books during our travels that are like this, with some moral and psychological heft underlying the excitement of the plot.

One final bit about the audiobook. Peck himself reads the introductions. The stories are split between Paul Boehmer, who reads the books with a male narrator or perspective, while Lara Schwartzberg reads the ones from a female perspective. That these are split fairly equally speaks to Peck’s ability to write well either way.

We will undoubtedly be listening to more Richard Peck in the next few years during our travels. From what we have listened to so far, he is a good writer, adept in multiple genres, and with a good eye for character.
Posted by Diary of an Autodidact at 9:32 PM