Harry Potter and the Prisoner of Azkaban

Source of book: We own this, but listened to an audiobook version narrated by Stephen Fry. Which is amazing.

As I noted in my prior posts about Harry Potter and the Philosopher’s Stone and Harry Potter and the Chamber of Secrets, I did not read the books when they first came out. I was in my 20s, in law school, and not particularly interested in kid books at that time. My second kid devoured them during her Junior High years, and remains the kid most into them.

In any case, they are arguably THE single most influential books for Millennials (as my wife pointed out), so I decided I should become familiar with them.

One thing that has become apparent throughout is that the Millennial loathing of Il Toupee does in part stem from Harry Potter. Rowling was perhaps a bit too prescient about the way evil men co-opt otherwise decent people, for example. Likewise, many of my parents’ generation - at least the Evangelical ones - loathe the books. (This is one of my frustrations with my mom, for example, who pretty much got eye-rolled by my kids when she opined that they were “demonic.” No, she hasn’t read them - but the Evangelical Industrial Complex says they are bad, so….) I believe one significant reason for this is that Boomers have become, in their older age, very focused on authority - their authority, of course. And Harry Potter points out that authority, far from being infallible, is often wrong, dangerous, and even malevolent. Thus, Harry and his friends have to actually follow their own consciences, not dictates from those in power. And this terrifies many Boomers. 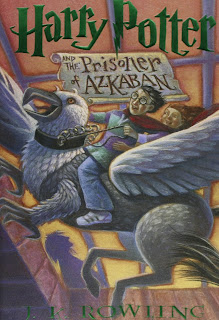 So, about The Prisoner of Azkaban, which is the third book in the series, here are my thoughts. As my Potter fan notes, the series gets more complex starting with the fourth book. The first three are a bit more formulaic. This certainly applies to this book, which adhered very much to the pattern of the first two. To quote my previous review:

It is easy to see significant plot parallels to the first book: the torment with the Dursleys, a visit to Diagon Alley, the trip to Hogwarts, conflict with Draco Malfoy, Quidditch, a nefarious threat hidden under Hogwarts, a visit to the forest, and so on. In that sense, it felt formulaic.

And yes, a lot of this applies, with just a few twists. The threat isn’t under Hogwarts this time, but in Ron’s shirt pocket, and the visit isn’t just to the forest, but to “Hogsmeade” as well. Instead of a magical object or creature, the threat is human.

The book opens, as usual, with Harry tormented by the cruel Dursleys, followed by his escape. A notorious wizard, Sirius Black, has also escaped from the gulag of the wizarding world, Azkaban, and is said to be seeking to kill Harry. In the meantime, there is a new professor for Defence Against the Dark Arts - that cursed position previously filled by Voldemort stooge Quirrel, then amusing charlatan Gilderoy Lockhart (so sad to see him go - he was so fun). This time, it is Remus Lupin, who turns out to be a werewolf. (Really subtle name there, Rowling…)

It would hardly be a spoiler to say that there is a big twist in the book involving Sirius Black, as this kind of a twist is also in the first two books.

There are some good moments in this book. I found professor Trewlany (who I am compared to occasionally…) to be good comic relief. The relationship between Harry, Ron, and Hermione continues to develop. I did feel like it missed a bit of the secondary characters this time, though. Other than arch-nemesis Draco Malfoy, the other students didn’t get much time on the page. I missed Neville and Ginny and George and Fred and the rest. Likewise, we get Lupin - who is a solid character, and the rare helpful professor - and Snape, but it feels like the rest of the Hogwarts faculty just makes cameos.

The plot is pretty interesting, though. I continue to be impressed by Rowling’s look at the way human beings respond to power. For Pettigrew, he is willing to betray his friends because, as a coward, he is determined to throw in his lot with whomever he believes has the most power, and who will prevail. This isn’t so much physical cowardice (many of us avoid danger and fear pain), but moral cowardice. Pettigrew lacks any moral backbone, and doesn’t give a crap about the harm that others will suffer. For an interesting fantasy comparison, see Terry Pratchett’s character of Rincewind. Rincewind avoids danger (when the Fates let him, at least), and runs way all the time. And he whines and stuff. But he is never a turncoat. Perhaps this is because “don’t get killed” is a more morally defensible ethical position than “be sure to be on the side of the winner.”

So far, the series has been an interesting case study in how humans turn evil, and I think Rowling does a good job with the psychology. Likewise, I think Harry is a well developed character. I wonder how the story would be from, say Hermione’s point of view, though. We get less of Ron and Hermione’s thoughts, although that is the limitation of the point of view in general.

On a semi-related note, my second kid IS Hermione in personality. We tease her that she really does need a “time-turner” given the academic load she wants to carry - she is determined to graduate high school a year ahead and go to college early. (There is precedent in my wife’s family - there are some wicked-smart women in every generation.)

I guess in summary, this book felt a bit like more of the same. Some good moments, imaginative ideas, but a bit too focused on plot and less on character than I would have preferred at this point in the series. It will be interesting to see where the next book takes things.

Posted by Diary of an Autodidact at 11:24 AM