Source of book: My brother owns the audiobook.


Ah yes, another trip, another Terry Pratchett book. This is #3 in the Rincewind series. For those keeping track (or who want to read my thoughts on other Pratchett books), here is the complete list of books we have experienced:


The Colour of Magic
The Light Fantastic


Guards! Guards! (Stupid abridged edition, which is an abomination.) 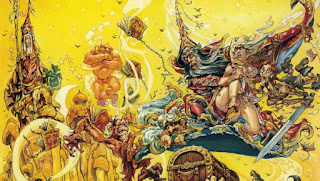 Some of the most 1980s and Fantasy art possible.


First, a comment on the title. No, this isn’t an example of the English tendency to add extraneous “u”s to various words. (Although I suspect Pratchett might have been inspired by it…) Rather, it is all about a distinction in the Diskworld universe between mere Magic, which is a power used by wizards and witches - a finite power in the universe, and “Sourcery,” which is an ability to draw new Magic into the universe - essentially a creative power. Hence “Sourcery.” One is a source, so to speak, of magic and power, rather than a practitioner of it.


This then ties in with the mystical powers of the number eight. (I presume this is a play on the Jewish tradition of seven as having mystical powers.) So anyway, an eighth son has magical powers, so he will become a Wizard. However, the eighth son of an eighth son is a Wizard squared: a Sourcerer. Because these are, shall we say, a threat to the survival of the universe and so forth, Wizards are strictly forbidden to procreate. Hence vows of chastity. (It is probably not a coincidence that in the Discworld universe, Wizards are often similar to priests, and that is not really much of a compliment.)


In this book, Ipslore the Red is a wizard who has defied the rules and married. As a result, he was banished from Unseen University, and exiled. Swearing revenge, he successfully cheats Death by pouring his essence into his metal (horrors!) staff, which he then gives to his infant eighth son, Coin. Death insists on a loophole (“The Lawyers of Fate demand a loophole in every prophecy.”), so Ipslore allows that Death can have him once Coin throws away his staff. Something no Wizard ever does voluntarily.


Fast forward a few years, and Coin, trained by his Staff/Father, comes to Unseen University, and takes over, revealing a vast power of Sourcery, and a determination to make Wizards rule the Discworld. This looks far too much like totalitarianism and cruelty, to say the least.


Standing against this threat are an unlikely bunch of adventurers. First is the Archchancellor’s Hat, the sign of office for the chief of the Wizards. After centuries of close contact with the greatest Wizards, it has become sentient and powerful in its own right. It hires (exactly how we are not told) the greatest thief in the discworld, Conina, a daughter of Cohen the Barbarian (see The Light Fantastic for more on him - one of Pratchett’s most hilarious characters) to steal it, so that it cannot fall into Coin’s hands. Conina escapes with the hat, but needs a Wizard to work with the hat. She enters a bar, and finds, of all people, the hapless Rincewind, the Discworld’s most incompetent Wizard. (If his magic skills were rated on a 1-10 scale, his would be a negative number, as the books point out.) Rincewind does have two key skills, however. First is his knowledge of languages, which serves him well in communicating with other cultures. Second is his remarkable ability (which is quite similar to cowardice) at staying alive. His instinct for danger (and determination to run away) has kept him alive despite all odds.


These three set out for a vaguely Islamic island on the edge of the Discworld so the Hat can find a mind worthy of his powers. At this point, the book becomes a bit of a parody of The Arabian Nights - Pratchett has WAY too much fun with the various tropes. (My kids remind me of Pratchett’s quote about this: “Some people draw from myths. I scribble all over them.” My favorite is the result of Conina being added to the seraglio. It turns out that what they do there is, um, tell stories. (Scheherazade would approve…) The Seriph is also - mostly - a poet. The kingdom is run by the very stereotypical Vizier, who the Hat selects as its human brain.


It is while here that the final member of the resistance is added. Rincewind is thrown into a snake pit. The snake isn’t particularly scary (I see perhaps a reference to the old cobra in The Jungle Books), but the other occupant turns out to be a certain Nijel the Destroyer.


Pratchett is fantastic at turning fantasy tropes on their heads, and in the Rincewind books, he has (so far) used no fewer than FOUR different versions. First is Hrun, in The Colour of Magic. Hrun is the all-brawn-no-brains hero, who falls victim (more or less) to a designing female willing to take her clothes off. Next up is Cohen the Barbarian in The Light Fantastic, who is the rare hero skilled enough to make it to old age, when he can still kick butt...as long as his sciatica doesn’t act up. In this book, you get Conina, who really just wants to be a hairdresser, but her genes make her pretty bad at that profession, and really, really good at killing people. As Rincewind puts it:


“Not much call for a barbarian hairdresser, I expect,' said Rincewind. 'I mean, no-one wants a shampoo-and-beheading.”


And then there is Nijel. (Yes, that is the correct spelling - I looked it up.) He is a Barbarian In Training. And by training, I mean “he has read the self-help book ghost written under Cohen’s name that tells about how to be a barbarian.” Said book, by the way, seems to resemble a Dungeons and Dragons manual more than anything useful. Nijel is also skinny in the extreme, has few if any actual martial skills, and uses “Erm, excuse me…” as his battle cry.


So, can Rincewind, the Seriph, Conina, Nijel, and the Hat save the universe? Of course! At least, with some help from The Luggage (who gets drunk when Conina rejects its romantic advances), The Librarian, and a couple of Wizards who see the danger in Sourcery. However, the book does end on a cliffhanger (although not as literally as The Colour of Magic) with Rincewind stranded in the Dungeon Dimensions (kind of the Discworld version of the Underworld.)


As usual, Pratchett is hilarious, thoughtful, and creative in his writing. The Rincewind series isn’t as philosophical as his later works (the Tiffany Aching books are practically a kids’ level course in ethics), but is so very humorous. These three books are pretty early in Pratchett’s career, and they are clearly aimed at doing for the fantasy genre what P. G. Wodehouse did to the British upper classes.


I also have to mention a scene in the book that reminds me of a later one in Good Omens. The Four Horsemen of the Apocralypse™ (Yes, that term too is intentional…) are riding to end the world (of course!), when they stop for refreshment at a bar. And all except for Death get drunk. The heroes, minus Rincewind (who is using a magic carpet), decide to steal their horses. Which ends up thwarting the End.


“It's going to look pretty good, then, isn't it," said War testily, "the One Horseman and Three Pedestrians of the Apocalypse.”


It is always fun in Good Omens trying to figure out which parts Pratchett wrote and which parts Neil Gaiman wrote. One of Pratchett’s must have been the humorous portrayal of the Four Horsemen…


There are so many fantastic quotes in the book. Here are some of my favorites.


“The truth isn't easily pinned to a page. In the bathtub of history the truth is harder to hold than the soap and much more difficult to find.”


Both amusing and all too true…


From Rincewind, who I very much sympathize and identify with, not being much of a hero myself:


“I don’t know what to do,” he said. “No harm in that. I’ve never known what to do,” said Rincewind with hollow cheerfulness. “Been completely at a loss my whole life.” He hesitated. “I think it’s called being human, or something.”


“I’m not going to ride on a magic carpet!” he hissed. “I’m afraid of grounds!” “You mean heights,” said Conina. “And stop being silly.” “I know what I mean! It’s the grounds that kill you!”


And one final one. Because poor Rincewind is a lousy Wizard. But he still IS a Wizard, and, in the scheme of things, a surprisingly important one. Furthermore, he is far braver than he thinks he is.


“There was something else I was trying to say,’ said Rincewind, letting go of the hand. He looked blank for a moment, and then added, ‘Oh, yes. It’s vital to remember who you really are. It’s very important. It isn’t a good idea to rely on other people or things to do it for you, you see. They always get it wrong.”


I have to end with some quotes about Death. Because, well, if I have to explain, you wouldn’t understand.


Indeed. And this one, which I must absolutely concur with. It makes me suspect that Pratchett was a cat person, and that makes me happy.


“I meant," said Ipslore bitterly, "what is there in this world that truly makes living worthwhile?"
Death thought about it.
“CATS,” he said eventually. “CATS ARE NICE.”


Anyway, yet another delightful installment of Terry Pratchett’s genius. With all of the Discworld novels, I recommend starting at the beginning of a series. See this chart for the necessary information. But I also recommend reading his other books, which are delightful too.

Posted by Diary of an Autodidact at 8:57 PM