I Shall Wear Midnight by Terry Pratchett

Source of book: Audiobook borrowed from my brother

Since first discovering Terry Pratchett less than five years ago, he has become one of our favorite authors. His imagination, social commentary, and strikingly complex and nuanced ethical dilemmas make for enjoyable yet deep books. And he does it all with brilliant humor and an empathetic touch.

Here are our previous selections: 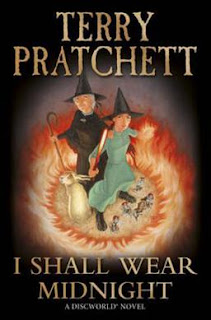 This book is #4 in the Tiffany Aching series - and you really should read them in order. Tiffany is a young witch (which in Discworld means she does magic - but mostly fills the role of nurse/midwife/social worker in her community.) In the first book, The Wee Free Men, she is a child, and has to deal with a child-appropriate challenge: keeping the queen of Fairyland out of the real (disk)world, and incidentally rescuing the local baron’s son. She then is able to train to be a full-fledged witch.

In the second book, A Hat Full of Sky, Tiffany is a bit older, and has a more complex and grown up problem. A “hiver” tries to take over her mind, and she must fight it off while trying to learn her craft. The ethical dilemma involves pride and empathy and what it means to be a witch.

The third book, Wintersmith, has Tiffany older still, and further along in her training. In a bit of a metaphor for puberty, she ends up inadvertently involved with the Wintersmith, the spirit of winter. While figuring out how to correct her mistake and allow spring to return, she also has to help extricate another witch in training (the delightfully mean-girl Anagrama) from problems of her own making. In essence, Tiffany has to learn leadership.

In this book, I Shall Wear Midnight, Tiffany is nearly 16, and is working as a witch in her native Chalk Country. The old baron is dying, his son Roland is engaged to a girl Tiffany dislikes (in part because she had feelings for Roland, a local teen girl miscarries after her father beats her nearly to death. Oh, and the ancient incorporeal embodiment of a notorious witch hunter known as the Cunning Man has returned, and is hunting Tiffany. Just another day in Discworld…

I Shall Wear Midnight has significantly more “adult” themes than the earlier books in the series. And by “adult,” I don’t mean smut. The themes do often involve sex, as do some of the jokes (and I mean that in the best possible way), but nothing is for titillation: these are adult problems that require maturity to address appropriately. So, Tiffany has to figure out how to protect a victim of domestic violence - and protect the perpetrator from being lynched by the mob. She has to navigate her own romantic feelings - and her own dark side - while doing the right thing for others and for her village. She has to figure out how to handle the issue of teen pregnancy and love. And she has to deal with a false accusation against her, and the creeping spirit of hatred that threatens to destroy her - and all that is good.

This time, she has to do it alone. At least mostly. The other witches can’t really help her here, except with advice; and indeed, they are poised to kill her if she succumbs to the Cunning Man. At least she has the Wee Free Men on her side, even if they cannot fight this battle. And she has the incorruptible Preston, who believes in her even when the lies about her threaten to fool everyone else.

Since the plot is a lot of fun, I won’t spoil any more of it than I have to.

I was particularly struck by how applicable to our present political moment this book is. There is a fantastic quote near the end, when Tiffany confronts the Cunning Man.

Pratchett really nails it here. The Cunning Man is no longer a person - he is just an idea: those rumors and lies that turn humans against each other. His spirit lives on in those like Le Toupee who stir up racial hatred against immigrants, refugees, and those outside our tribes. It is a spirit which is contrary to teachings and example of Christ, and it is ironic that Pratchett, who was not religious, had a better handle on this than a shockingly high number of Christians in this country.

There are so many marvelous quotes in this book - Pratchett writes like a human quote generator. Let me mention some of my favorites, starting with these two:

“Evil begins when you begin to treat people as things.”
My wife marched at the local women’s march last month carrying that quote on a sign. This is one of Granny Weatherwax’s pearls of wisdom. The second quote is related:

“People aren't just people, they are people surrounded by circumstances.”

That’s the problem with oversimplification - particularly when it comes to poverty. It is why giving people moral lectures doesn’t help - and tends to make things worse. The circumstances are important, and you can’t just look at people in isolation from them.

And then, there is this quote, which is pretty apropos to our times as well as to the Cunning Man and his ideas:

“And there are those who would rather be behind evil than in front of it.”

Pratchett also expresses what many of us who long for a better, more just world feel, both about the past (which isn’t the glorious golden age people wish to imagine) and the future.

“There have been times, lately, when I dearly wished that I could change the past. Well, I can’t, but I can change the present, so that when it becomes the past it will turn out to be a past worth having.”

Or this one, about life and death - Pratchett has so many fine quotes on these topics:

“One day all of us will die but - and this is the important thing - we are not dead yet.”

Don’t think for a moment, however, that this book (or any Pratchett book) is dark and serious. Pratchett simply overflows with good humor and wit both smart and silly.

“Roland was staring at Tiffany, so nonplussed he was nearly minused.”

“Behind her, Preston grunted and said, "I know it's not the right thing to say to a lady, miss, but you are sweating like a pig!"
Tiffany, trying to get her shattered thoughts together, muttered, "My mother always said that horses sweat, men perspire, and ladies merely glow..."
"Is that so?" said Preston cheerfully.
"Well, miss, you are glowing like a pig!”

The Wee Free Men, aka the Nac Mac Feegles, are hilarious whenever they appear. Some of the best lines belong to Daft Wullie, who is not, shall we say, the sharpest tool in the shed.

“I may be daft but I'm no' stupid!” he protests. But then, after really inserts his foot in his mouth:
Rob Anybody clearly noticed this, because he turned to his brother and said, “Ye will bring tae mind, brother o’ mine, that there was times when ye should stick your head up a duck’s bottom rather than talk?” Daft Wullie looked down at his feet. “Sorry, Rob. I couldna find a duck just noo.”

Pratchett rarely passes up a chance to make a mildly naughty joke either - in good British taste, naturally. I liked this exchange:

“‘Arse’ is a traditional usage—nothing to be ashamed of.” The Baron nodded. “It has a commendable grown-up sharpness to it. ‘Ass,’ on the other hand, is quite frankly for spinsters and little children.” Tiffany turned the words on her tongue for a moment and said, “Yes, sir. I think that is probably the long and the short of it.”

I’ll finish with a couple from Tiffany, in her less than charitable moments. Throughout the book, she struggles with the thoughts that the Cunning Man puts in her head, and doesn’t always quite win the battle. About her rival (who later turns out to be not all that bad):

“Letitia! What a name. Halfway between a salad and a sneeze.”

And, about Letitia’s genuinely appalling mother (who both gets a comeuppance and turns out to be more a complex and troubled person than a true villain):

“Well, child? Aren't you going to try to turn me into some kind of unspeakable creature?”
“I don't think I shall bother, madam, seeing as you are making such a good job of it yourself!”

Perhaps that is the theme to take away from the book, though. People are surrounded by circumstance, and are rarely pure good or pure evil. They are complicated, and navigating through life requires learning to read them. And being a decent person requires rejecting the hatred of the Cunning Man, and rejecting the urge to turn our fears and weakness into harming others.

My second daughter is particularly fond of this book out of all of the Pratchett books we have read. I have to concede that it is indeed a good one. However, it makes the most sense if you read the others in the Tiffany Aching series first, so you understand her history and how she came to be who she is.

Just a note of caution on the audiobooks: For reasons that are entirely lost on me, somebody decided that Pratchett needed to be shortened, and made a series of abridged audiobooks read by Tony Robinson. In the process, much of what makes Pratchett delightful is lost. The detail, the language, the wit. DO NOT BOTHER WITH THESE! THEY SUCK! And I hope there is a circle of hell for book abridgers in general. Blah!

Instead, look for one narrated by Stephen Briggs, if possible. (Nigel Planer is also good.) Briggs was a good friend of Pratchett’s and they collaborated on a number of projects. Briggs is a fantastic reader in general, and and particularly good at the Wee Free Men and Anagrama.


Posted by Diary of an Autodidact at 2:59 PM