This book is part of our rather unsystematic exploration of Newbery award winners and honorable mentions. A Single Shard won the Newbery award in 2002. 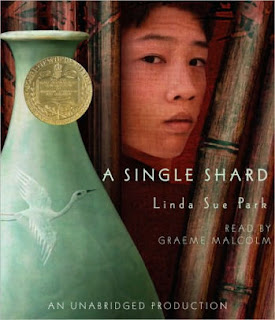 A Single Shard is set in 12th Century Korea. A young orphan, Tree-ear, lives with the disabled man who took him in, Crane-man. One day, while secretly watching master potter Min work, he accidentally breaks an item. He offers to pay for it with his work, which eventually leads to employment. As a result, Tree-ear eventually is tasked with taking a sample to the Emperor’s pottery master in an effort to gain a royal commission.

The pottery in question is Celadon pottery, which has a lustrous green finish, somewhat like jade. The book is set at a transition point, where carved single color designs gave way to intricate inlaid work. This transition forms a major plot point, as Min is asked to submit what for him is a new technique. The epilogue to the book mentions a specific work as one of the finest from this period, and implies that (artistic license here…) Tree-ear eventually creates this work. (The actual potter is unknown, but the workmanship is astounding. I used the description to find what I believe is the vase referred to in the book. 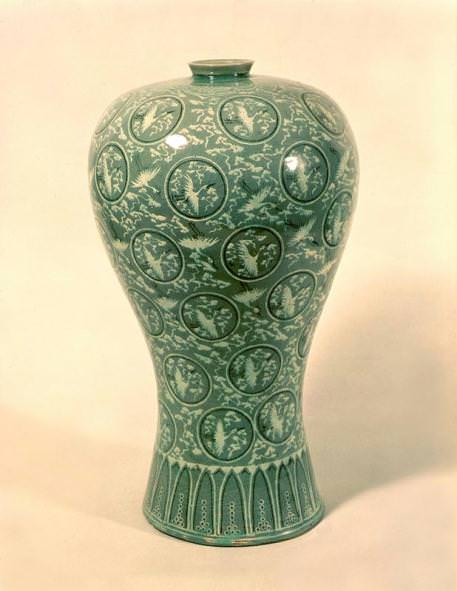 The amazing thing about this is that the black and white colors are not painted. Rather, minute grooves are cut from the partially dried vase, and contrasting clay is carefully inlaid. A clear glaze is applied before firing. The hundreds (thousands?) of hours necessary to create a masterpiece like this - it is amazing and worthy of great respect.

This book is fairly short - just over three hours on audiobook. It is well focused, with every detail important to either the atmosphere, character development, or plot. With a minimum of words, Park brings an old, unfamiliar culture to life, but also makes Tree-ear’s world seem familiar and relatable. There are really only four main characters. Tree-ear, of course, is the protagonist, and the story is from his perspective. Crane-man is delightful, as the elderly man who has lived a very hard life, surviving mostly by gathering food from the forest or rubbish heaps around town. And yet, despite this desperate poverty, he takes in the infant Tree-ear and raises him well. Both are united in that they are considered “unlucky” and therefore essentially untouchable in their culture.

Min is cantankerous and cold, yet passionately devoted to his craft. He also hides a secret tragedy that has, in contrast to Crane-man, made him bitter. Min’s wife (who asks that she be called the equivalent of “auntie” rather than “the honorable potter’s wife,” as Tree-ear calls her at first) is a gracious woman, who befriends Tree-ear in her own quiet way.

It is the interaction of these four that give depth to the fairly conventional story. Park slowly introduces the elements of the culture and manners of the time and place to the story, and the interactions are always carefully ritualized. The courtesies are mandatory, and serve to allow dignity to all. I was reminded of some of the social courtesies from Filipino culture that my dad (who grew up there as a missionary kid) taught me. Culture varies, and rituals vary and change over time. None are truly right or wrong, but the differences can cause misunderstandings. The worst, perhaps, is the “ugly American” tendency to run roughshod over the culture of others, and display an arrogant attitude about it. This is one reason I think books like this are great for kids (and adults.) A little education never hurt, and neither did a reminder to treat others with respect, listen, and learn how to bridge these gaps.

A Single Shard is a good read. The plot may be a bit predictable, but that isn’t the point. Some stories are told and retold countless times, but only gain from a new variation, and this is one of them. The audiobook was read by Graeme Malcolm; I have no complaints about his reading, which was fine.

Posted by Diary of an Autodidact at 3:35 PM

Email ThisBlogThis!Share to TwitterShare to FacebookShare to Pinterest
Labels: coming of age, Fiction, Korea, pottery, Reading With my Kids