The books are semi-autobiographical. St. Aubyn grew up in an aristocratic family, with a father who abused him in about every way possible, including sexually. He became addicted to heroin, but eventually got clean and became a writer.

Each of the five books observes a sort of classical unity. Each tells of a single day, which stands in for an epoch in the life of the central character, Patrick Melrose. The first two books came out in 1992, and the third in 1994. St. Aubyn then turned to other projects, before writing the final two books in 2005 and 2012, respectively. The edition we bought has all five in one book.

The books are each fairly short, somewhere between a novella and a short story. Perhaps you could say they are novella length, but short story in spirit. 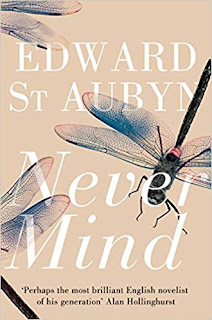 The first book, Never Mind, tells of a day in the life of the very young (age 6 or 7?) Patrick and his parents. It starts with his mother drugging and drinking herself into marginal functionality and setting off for a day with a friend. It ends with three couples having a really awkward and pointless dinner party. By that time, Patrick has experienced his father’s abuse (in a really rough scene), seen his mother ignore him, and find the only ray of hope in the small kindness of an American woman - perhaps the only semi-sensible character. And she still has all kinds of issues.

Never Mind felt like a bit of an introduction - which it is. I probably should have read the other two as well, in retrospect. I will in the future.

What I can say from the one book is that the writing is excellent. St. Aubyn is able to convey pictures with a minimum of words, to open a universe with a few sentences or a paragraph. Even though the subject matter is pretty horrifying, it is so easy to be drawn in by the way the story is told. There are so many great lines, and various members of our book club had their own favorites. Here are the ones I wrote down.

The expression that men feel entitled to wear when they stare out of a cold English drawing room onto their own land had grown stubborn over five centuries and perfected itself in David’s face. It was never quite clear to Eleanor why the English thought it was so distinguished to have done nothing for a long time in the same place, but David left her in no doubt that they did.

Or how about this one - a real favorite with our club:

‘On the way back, I found myself thinking that everybody who is meeting for dinner tonight will probably have said something unkind about everybody else. I know you’ll think it’s very primaitive and American of me, but why do people spend the evening with people they’ve spent the day insulting?’
‘So as to have something insulting to say about them tomorrow.’
…
‘But that’s what the charm is: being malicious about everybody except the person you are with, who then glows with the privilege of exemption.’

Or how about this poisonous conversation at the dinner party?

‘Ethics is not the study of what we do, my dear David, but what we ought to do,’ said Victor.
‘That’s why it’s such a waste of time, old boy,’ said Nicholas cheerfully.
‘Why do you think it’s superior to be amoral?’ Anne asked Nicholas.
‘It’s not a question of being superior,’ he said, exposing his cavernous nostrils to Anne, ‘it just springs from a desire not be be a bore or a prig.’
‘Everything about Nicholas is superior,’ said David, ‘and even if he were a bore or a prig, I’m sure he would be a superior one.’
‘Thank you, David,’ said Nicholas with determine complacency.
‘Only in the English language,’ said Victor, ‘can one be “a bore”, like being a lawyer or a pastry cook, making boredom into a profession - in other languages a person is simply boring, a temporary state of affairs. The question is, I suppose, whether this points to a greater intolerance towards boring people, or an especially intense quality of boredom among the English.’
It’s because you’re such a bunch of boring old farts, thought Bridget.
Yvette took away the soup plates and closed the door behind her. The candles flickered, and the painted peasants came alive again for a moment.
‘What one aims for,’ said David, ‘is ennui.’
‘Of course,’ said Anne, ‘it’s more that just French for our old friend boredom. It’s boredom plus money, or boredom plus arrogance. It’s I-find-everything-boring, therefore I’m fascinating. But it doesn’t seem to occur to people that you can’t have a world picture and then not be part of it.’

It’s an interesting experience, enjoying the repartee while thoroughly loathing the people involved.

I intend to read the rest of the books, which I expect will explain a lot more of the story. The writing is good, and the autobiographical nature of the books add an extra dimension.
Posted by Diary of an Autodidact at 9:21 PM