When I was a kid, we used to camp throughout the year. During the hot days of summer, we would head for the mountains. During the cooler part of the year, we would camp at the beach. For the most part, we liked to camp at a place called Emma Wood State Beach, just west of Ventura. The campground is right on the rocky beach, so you can sit and watch the ocean during the day, and see the lights of the oil rigs at night. If it is a clear day, you can see across the channel to the string of islands about 20 miles offshore. 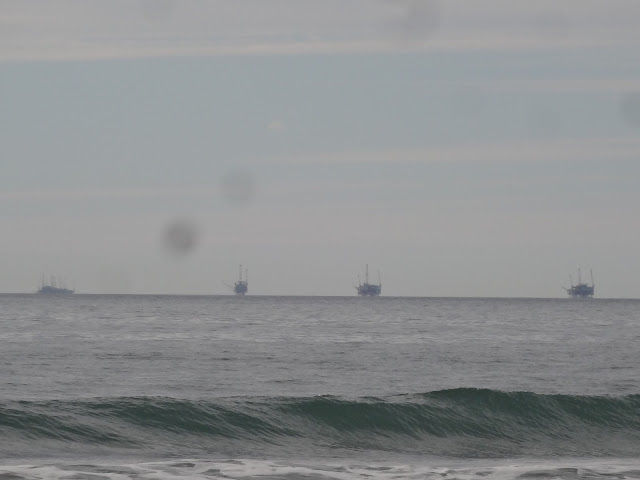 (l-r) Platforms "Gina," "Gail," "Gilda," and "Grace."
Picture taken from Rincon Parkway, 2015.
The infamous Platform A is further to the west by about 20 miles.
I'm pretty sure we crossed between Gail and Gilda on our boat ride to Santa Cruz Island.

There are eight total Channel Islands. Santa Catalina Island is inhabited - and is a premier scuba diving destination. San Nicholas and San Clemente Islands are owned by the US Navy, which uses them for live-fire exercises. Ironically, the Navy is also committed to protecting some endemic species on these islands. It appears the occasional shelling is less damaging than the goat, sheep, cattle, and pig ranching that was done in the late 1800s. San Nicholas Island is also the location for the real-life story told in Island of the Blue Dolphins.

The remaining five islands, (west to east) San Miguel, Santa Rosa, Santa Cruz, Anacapa, and Santa Barbara, are all part of the Channel Islands National Park. Anacapa and Santa Cruz were designated a National Monument back in 1938. The others were designated as part of the newly-created National Park in 1980. However, because they were private land, they had to be purchased (at exorbitant cost) from the landowners. This process took until well into the 1990s - and the last of the feral pigs weren’t exterminated until a few years ago.

Human habitation of the larger islands dates back at least 10,000 years, but it wasn’t until the 1800s that the Mexican government granted large estates on the islands to ranchers. Over the years, goats, pigs, cattle, and especially sheep were raised on large ranches. These wreaked havoc on the local flora and fauna. 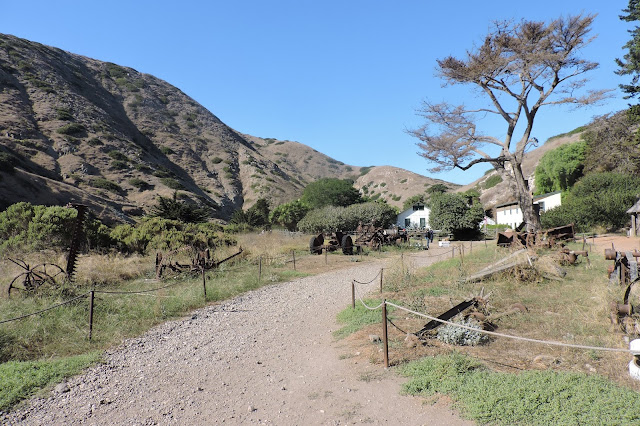 What really started the push to preserve the islands, however, was a human-caused catastrophe. In 1969, what was then the largest oil spill in US history occurred. Even today, it is the third largest in US history. Over a hundred miles of coastline was fouled, thousands of birds died, plusa large numbers of fish and marine mammals. Southern California today is home to 23 million people - it was lower then, but it was still a highly populated area.  The catastrophe was enough to spur significant action. Our modern environmental laws stem from this incident. The EPA. The Clean Water Act. Actually, pretty much everything the current Administration and the GOP wish to dismantle. Here in California, the incident led to state legislation such as the California Environmental Quality Act, and the formation of the California Coastal Commission. In addition, since that time, California has refused to permit any further offshore drilling within its 3 mile limits. You can read more about the spill here. 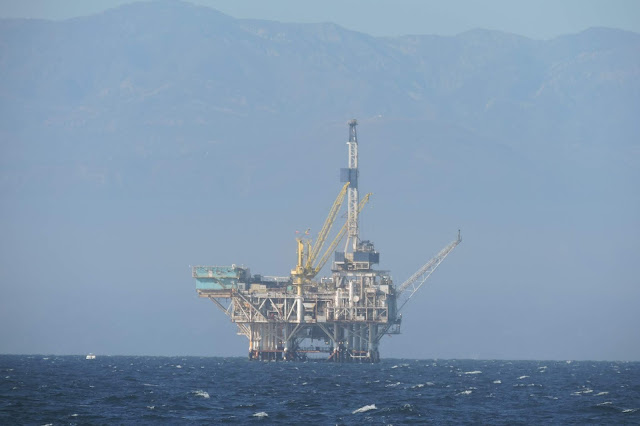 I'm pretty sure this is "Gilda," taken from the boat on the way back from Santa Cruz Island, 2018.

The spill also led to efforts to preserve the unique ecosystems of the Channel Islands - a rare bit of wilderness just a few miles from one of the most populous areas of the United States.

One unique feature of the park is that more than half of it is underwater. Significant portions of the ocean surrounding the islands is a nature preserve, leading to vibrant underwater ecosystems and fantastic diving locations.

I had previously been scuba diving off of Anacapa Island, but had never actually set foot on the land. Recently, the kids and I took a boat out to the largest island, Santa Cruz Island, for a day of hiking and exploration.

Santa Cruz Island is interesting in that only a quarter of it is owned by the Federal Government. The rest was donated over time by the original owners to the Nature Conservancy. This portion of the island is kept largely wild, with visitation restricted. The Federal portion is more accessible, with hiking trails and a campground.

The Channel Islands are also an interesting demonstration of Charles Darwin’s famous theory. Darwin noted that isolated island populations of animals developed unique traits over time. In particular, island creatures tend to grow either larger than usual, or smaller than usual. This is a phenomenon which is seen all around the world, and the Channel Islands are no exception.

While hiking, we saw several examples of this phenomenon.

First is the Island Fox. Regular sized foxes are common in North America. Kit Foxes are a much smaller version. Where I live in Bakersfield, you can find San Joaquin Kit Foxes, which are the size of medium-small dogs. But on the Channel Islands, you can find even smaller foxes - more closely related to full sized foxes than true kit foxes - an endemic species which nearly went extinct as a result of human interference. Here is what happened: pigs were brought over to the islands, and became feral. The pigs destroyed fox burrows, but also attracted Golden Eagles, which ate both the piglets and fox cubs. As a result, the foxes were on the brink of extinction - only 100 or so were left. The Nature Conservancy and the NPS worked together to save them. The pigs were finally exterminated by 2006. Native Bald Eagles were reintroduced to the island. These were territorial, and kept the Golden Eagles away - and Bald Eagles eat fish, not foxes. Recently, Island Foxes were removed from the Endangered Species List - a fantastic success story. You can read more here. Island Foxes lack the usual fear of humans, so they can be a nuisance. They will steal your food if you are not careful. On the other hand, they are not aggressive and won’t bite unless handled. And, they are seriously cute. Roughly the size of cats but weighing less, they have a lot of cat-like mannerisms, making them irresistible for kids. 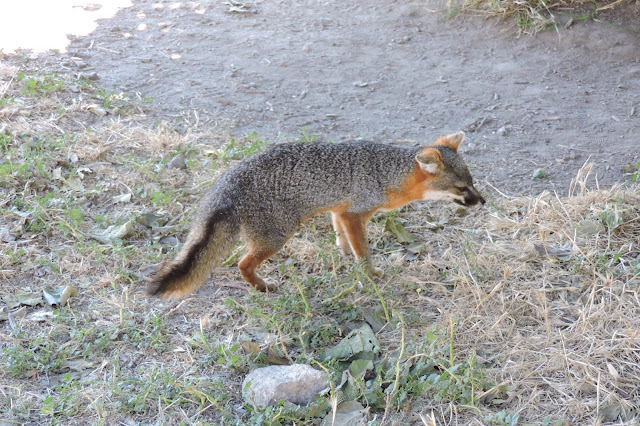 Another endemic species with a small size is the Island Fence Lizard. These are smaller than their close relative, the Western Fence Lizard. There were several other bird and reptile species which are considered sub-species unique to the island, but the differences are more minor.

Finally, there is the Island Scrub Jay. There are two mainland species of Scrub Jay here in the western United States, the California Scrub Jay, and the Woodhouse’s Scrub Jay. The Island version looks similar to the California version, but is significantly - 50% - bigger. It also is a strikingly rich blue, and has a different call than other jays. DNA evidence suggests that it split from its mainland cousins about 150,000 years ago - which coincides with when the islands likely were separated from the mainland. 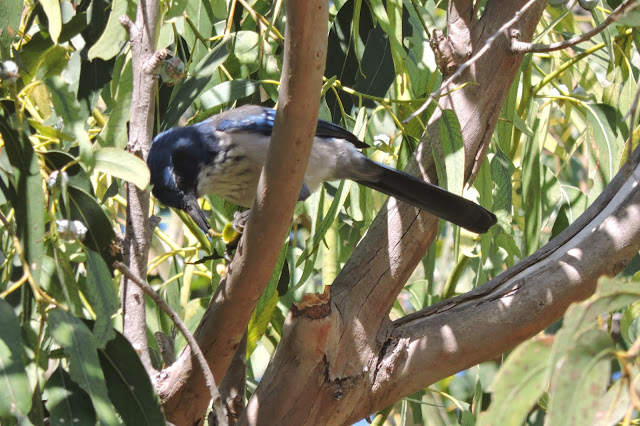 In addition to the abundant wildlife underwater, on the land, and in the air; Channel Islands National Park contains great views, memorable hikes, and beautiful clear water.

The easiest way to get to the islands is via boat. While I know people who have kayaked the 10-20 miles across the channel, the average mortal will generally want to catch a ride with Island Packers. Scuba divers can take a trip on one of several boats to a variety of destinations. I haven’t gone diving much since we had kids - just sporadically - and I am not up on which boats are the best these days, so ask around a bit. 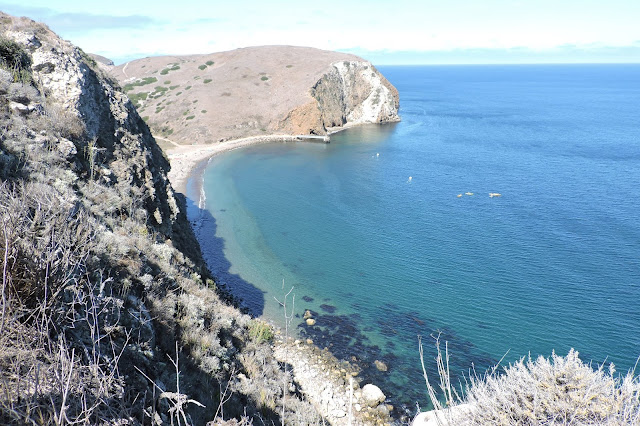 Scorpion Bay from the trail. 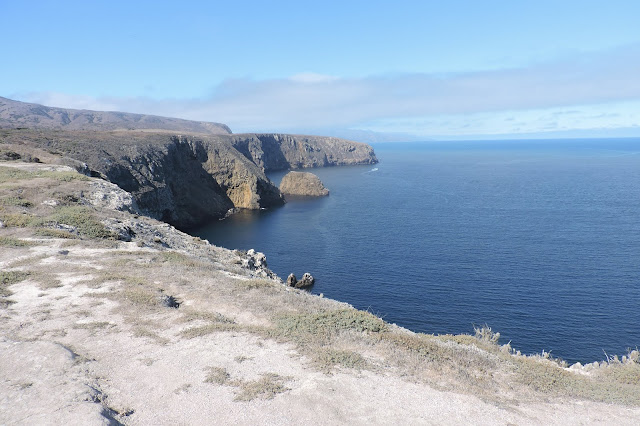 The north coast of Santa Cruz Island from Cavern Point. 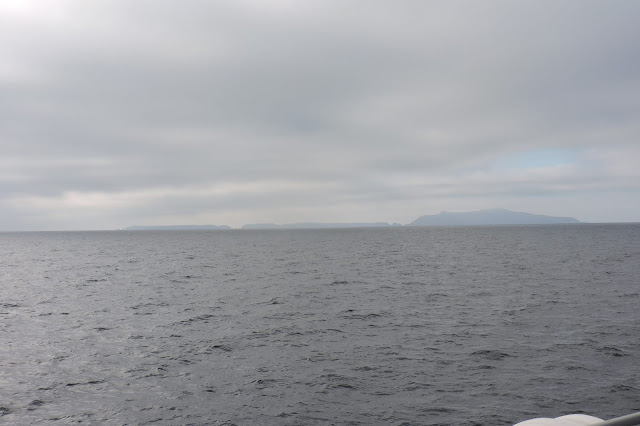 Anacapa Island from the boat on the way to Santa Cruz Island. 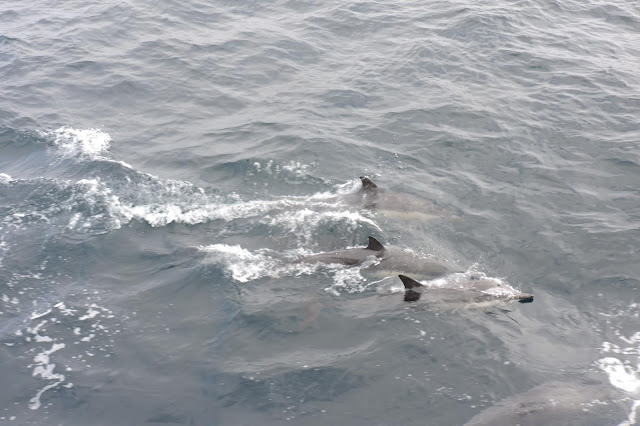 Common Dolphins in the Santa Barbara Channel.
There are an estimated 10,000 of these that live here. 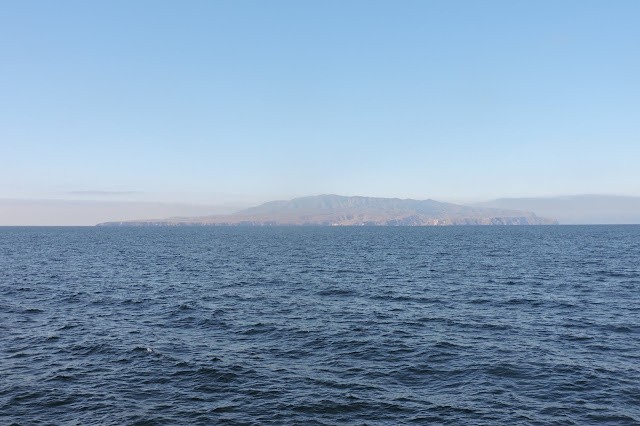 The eastern side of Santa Cruz Island. 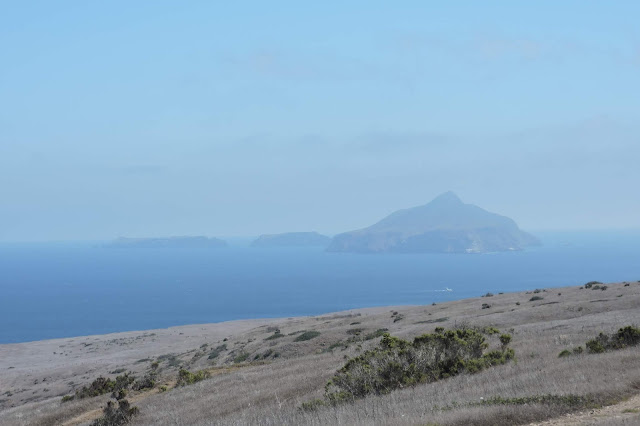 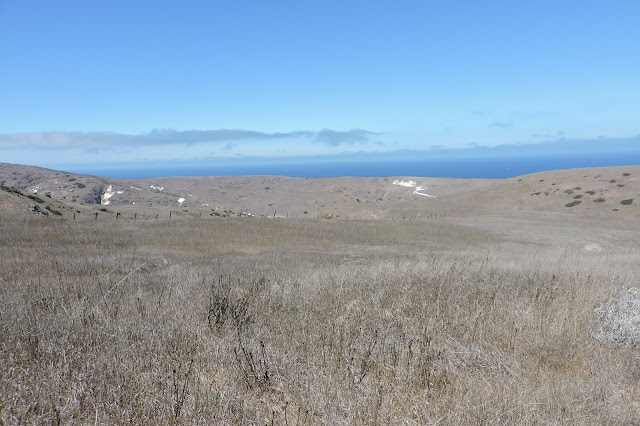 View from the Smuggler's Bay Trail. 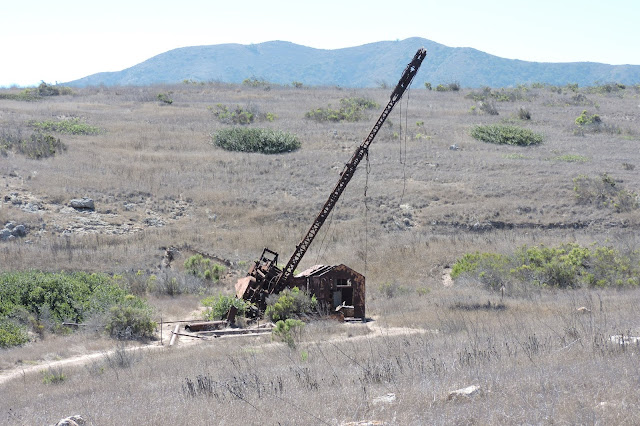 An abandoned oil rig near the centerline of the island.

Posted by Diary of an Autodidact at 8:31 PM