Daisy Jones and the Six by Taylor Jenkins Reid

This was this month’s selection for our “Literary Lush” book club. One of the things I enjoy about this club is that I end up reading interesting books that I never would have discovered on my own. Daisy Jones and the Six is definitely one of those books I had no idea existed, and likely would never have decided to read. Let me say at the outset that this book wasn’t really my cup of tea. It wasn’t horrible, but it wasn’t my kind of book. 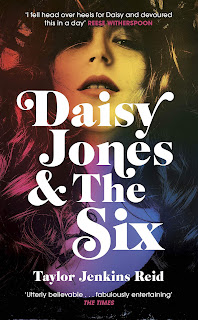 The basic idea of the book is that it is a rock mockumentary. It’s a book about a fictional rock band (that kind of sort of resembles Fleetwood Mac, maybe?) I think Reid’s point is to write a book that looks at the rock and roll lifestyle from a more female perspective, and the book sort of does that. But I have to wonder why it had to be a fake band rather than a real one. I found it hard to get interested in or invested in the characters, because they and their songs didn’t actually, you know, exist.

The usual rock biography stuff is in there. The band members sleeping with each other. Lots of booze and drugs. All night songwriting sessions. Drama. Lots and lots of drama. It’s stuff that you expect.

It might have been one thing if the characters were somehow unique or compelling (as in the case of The Air You Breathe), but they really felt like stereotypes of particular rock stars. Or perhaps like real rock stars who had the identifying details removed.

On the more positive side, Reid did a good job at keeping the voices of each character distinct - and their stories straight. After all, each has a different perspective and memory of events.

One thing our group agreed was a significant misstep was the twist at the end: (spoiler alert!) the “author” of the story is the daughter of the male lead singer. The problem with this is that there seems to be no freaking way that the characters would actually be open her - particularly her parents. I mean, who tells their kid about all the sex and drugs in that kind of detail? Or spills their guts about their problems with their spouse? It seems implausible. And unnecessary to the story.

My wife also noted that despite the lurid details, the language itself was rather naive. Not really much cussing.

Overall, not the best book we have read, although diverting in its way.

Due to Covid-19, this was our first book club discussion via Zoom.  While not as good as an in-person meeting, it worked, and helped keep us all from feeling isolated.

Just for fun, here is the list of books that our book club has read. At least the ones I have read too. Most of these were read for the club, but a few were ones I read previously - those posts pre-date the club discussion - and some I read afterward, because I missed the discussion.

Calypso by David Sedaris
The Air You Breathe by Frances de Pontes Peebles
The Penelopiad by Margaret Atwood
The Boy Who Harnessed the Wind by William Kamkwamba and Bryan Mealer
The Haunting of Hill House by Shirley Jackson
There There by Tommy Orange
Little Fires Everywhere by Celeste Ng
Be Frank With Me by Julia Claiborne Johnson
The Song of Achilles by Madeline Miller
Educated by Tara Westover
Stiff by Mary Roach
A Gentleman in Moscow by Amor Towles
Ready Player One by Ernest Cline
The Marsh King’s Daughter by Karen Dionne
Rosemary’s Baby by Ira Levin
Never Mind by Edward St. Aubyn
All the Birds in the Sky by Charlie Jane Anders
Artemis by Andy Weir
Annihilation by Jeff Vandermeer
The Goldfinch by Donna Tartt
The Island of Doctor Moreau by H. G. Wells
The Master and Margarita by Mikhail Bulgakov
The Radium Girls by Kate Moore

Posted by Diary of an Autodidact at 11:27 AM