The Island of Doctor Moreau by H. G. Wells


Boy, it has been ages since I read any H. G. Wells! Back in my youth, I read some short stories, plus the classic Science Fiction works The Time Machine and The War of the Worlds. More recently - but still over a decade ago - I read The Outline of History, which is a fascinating (if a bit dated) work. Apparently, Wells wrote a lot of books after these, but most remain obscure.


Wells can be frustrating to read sometimes, because he has great ideas which he doesn’t always flesh out as well as one might like. (At least those of us who are fine with books being long and detailed.) The Island of Doctor Moreau is a particularly good example of that fault. Although it was published after The Time Machine, this book was actually written first of Wells’ novels. He called it a “youthful exercise in blasphemy,” and it certainly shows signs of being a juvenile work. Even The Time Machine shows a growing maturity, and The War of the Worlds, probably his best work, is in a different class altogether when it comes to writing skill. 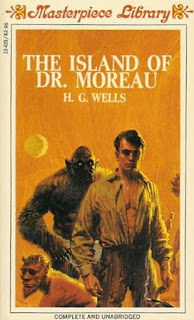 I read this book because a local book club chose it for October. My wife has attended some meetings, and I had intended to go to the one featuring The Master and Margarita, but a vehicle repair job went late, and, well, I didn’t.


This book, like the other best known books by Wells, are notable because they contained ideas which have fascinated us ever since. Time travel is a staple of Science Fiction. But Wells wrote the first real time travel novel. Alien invasions? That was Wells too. Invisibility? Yep. Horrible scientific experiments involving animals? That would be Doctor Moreau.


Wells’ influence extends further, however. C. S. Lewis references him often in his works, and appears to be attempting to refute him in a number of passages. (Wells was disenchanted with religion, and, along with George Bernard Shaw, was often on the opposite side from Lewis and G. K. Chesterton.) Wells also was instrumental in making evolution a staple or the Science Fiction genre. So there is a lot that we take for granted in literature that can be traced to Wells’ ideas and writings.


The plot of Moreau should be familiar enough, even to those who have not read the book. A traveler is rescued from a shipwreck, only to find himself stuck on a island in the Pacific with a mad scientist and his assistant. Doctor Moreau experiments in vivisection, combining animals in an attempt to create human/animal hybrids. (It does not appear he is using humans, however. He may be using his own human blood in transfusions. This is one area where it would have been nice if Wells had been a bit more descriptive.) These beings he creates are sentient and can talk, although they do not rise to the level of human ability. Furthermore, Moreau notes that they tend to revert to their animal ways unless constantly trained.


Eventually, disaster comes. An animal escapes, Moreau is killed, and things go downhill from there.


One of the central ideas in this book - one which has become engrained in our culture - is the Litany of the Law. Moreau teaches the beast-men a series of commandments, the dos and don’ts of the world he has created. One of the creatures, the “Sayer of the Law” leads the animals in daily recitation of the Law, ending each commandment with “Are we not men?” (Note the reference borrowed by Devo.) That this Litany is strikingly similar to both cultural taboos and religion is not an accident. I believe this is why the idea has stuck around in our minds. It is a bit too familiar. This also ties in with the end of the book - more about that later. Violation of the Law leads to a return to “The House of Pain” for further vivisection.


The moral choices Moreau has made, and his justifications for them, are quite chilling. Moreau sees anything as morally possible and acceptable if it serves scientific curiosity, and brushes off the narrator, Pendrick’s objections. A couple of lines particularly stood out here. Moreau claims that the intellect is fluid (something we know now isn’t true - animals lack the necessary brain structure for human thought) and that the only difference between us and animals is education.


Very much indeed of what we call moral education, he said, is such an artificial modification and perversion of instinct; pugnacity is trained into courageous self-sacrifice, and suppressed sexuality into religious emotion.


Remember, this is Moreau speaking, not H. G. Wells. (This is a common confusion - one I think is intentional. It is too easy to assign a lack of ethics to atheists, and rarely accurate.)


Also interesting is this one, after Pendrick argues that it is unethical to inflict pain, unless there is at least some good likely to come out of it.


“For it is just this question of pain which parts us. So long as visible or audible pain turns you sick; so long as your own pains drive you; so long as pain underlies your propositions about sin, - so long, I tell you, you are an animal, thinking a little less obscurely what an animal feels.”


This one really struck me, because I heard an echo of something I was told a couple of years ago. Pretty much along the lines of “Don’t let your compassion drive your ethics.” Moreau complains that we let our view of what is sin be driven by our desire to avoid pain and avoid inflicting it on others. Too confining, clearly. We have to be free to hurt others (particularly the vulnerable) or we have an “animalistic” view of sin.


Anyone see the problem here?


In case anyone wondered, it wasn’t an atheist who said this. Far from it. And the reason it was said was to attempt to prevent people like me from questioning certain religious rules that were and are causing great pain and damage to others. Oh, and we see this in politics right now too. Who cares about the Dreamers? The law is what matters. Kick them all out - more for us. Refugees? Likewise. Kick the poor and disabled off healthcare? Of course. Don’t let your compassion drive your ethics. Ignore the pain of others.


Well, I guess I am an old fashioned, backwards sort who still believes in the Golden Rule. But you won’t find that in Evangelicalism much these days - politics trump compassion. (Pun intended.)


That leads to another observation. Moreau initially likes his creatures. But then, as animalistic traits creep back in, he loathes them, and turns them out. He doesn’t see a human soul there, only the soul of an animal. I think this too is true. In order to be as cruel and uncompassionate as we humans can be, we have to dehumanize the “other.” This is my observation. If you grant others a human soul, you cannot excise your compassion and ignore their pain. It is only through systematic dehumanization of the “other” that this can be done.


The end of the book is interesting. Pendrick escapes the island on a boat that washes ashore, but he is unable to live among society again. The problem is that he imagines that all humans are on the verge of reverting to beasts, and every sign of human degradation and vice seems to him to be the beginning of the process.


Wells isn’t that far off, unfortunately. I think this one is all too true. When we consider how a civilized nation nearly destroyed the world - and murdered countless millions - just in the past century; it isn’t a stretch to understand that our most beastial nature is just below the surface. Stoke a fear here, add an insecurity there, find a persuasive psychopath to feed those fears and call for hate. And before you know it, you have the Holocaust. We see it now in our own country, where millions of otherwise decent people have seemingly openly embraced nativism. It has shaken me to see it, and I feel a bit like Pendrick. I had thought that we were better than that, but I worry that given a chance, we will go back to tearing each other to pieces like animals.


The Island of Doctor Moreau is a flawed book, a bit of a juvenile effort, and not always the easiest read. But it has been tremendously influential in our imaginations, and for good reason. The questions Wells raises of science and ethics, compassion, and the state of man remain relevant today, perhaps more than ever.

Hey, we need some of the other band that borrowed from this book:

Posted by Diary of an Autodidact at 12:42 PM