Into the River by Ted Dawe

This book was my selection for Banned Books Week. Which happened to coincide with multiple Symphony concerts with crazy-difficult music. So I took a while to finish it.

Just as a reminder, I use the week to read books which have been banned, which means that a government has outlawed sale, publication, or possession of the book. I do not count challenged books - those which citizens or parents have sought to keep out of school curricula or libraries. This isn’t because I think challenges are interesting, but because I wanted to focus my once a year project on those where the power of the state was employed in censorship. I believe that is a different level from a challenge. After all, any library has limited space and budget, and decisions must be made. (Personally, I would have preferred an extra - and local - copy of The Rest is Noise rather than one of the 20ish copies of Eat, Pray, Love.) Likewise, students can only study so many books, and the choice of which to study is a judgment call.

Here are my past selections, plus the introduction to Banned Books Week. 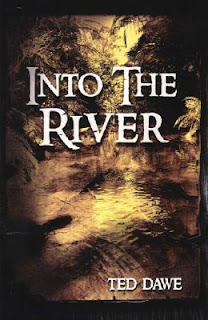 Fortunately, this ban was short lived. The library association challenged the ban, and it was overturned, despite loud squawking from the Culture War type groups. Yes, the Culture Wars™ extend beyond the borders of the United States - although they tend to have less power elsewhere.

So, I picked this book for those reasons, and also because our local library had it on the shelf.
I think this book is an example a very interesting Culture War phenomenon: works which otherwise would probably have faded into obscurity are given inordinate attention after some fundamentalist group decides to start a crusade against it. The example from my childhood is the protest against The Last Temptation of Christ, which was by just about any account, a laughably terrible movie. The only reason it had an audience was because of the protests.

Into the River isn’t a bad book. But it isn’t, in my opinion, a great book. It is okay. It has some interesting points and observations. Some descriptions and scenes are quite compelling. And others are pretty much “meh.”

The plot is this (some spoilers): Te Arepa is a Maori boy who wins a scholarship to a prestigious boarding high school for boys. In order to fit in with a mostly wealthy and white culture, he must submerge his identity. The school has problems just below the surface in the form of sanctioned bullying, drug use, and a professor who trades for sexual favors from the boys. Te Arepa has to decide if the cost is worth it, or whether he will, like his legendary ancestor Diego, choose freedom.

Along the way, the book explores some other subcultures, from the Maori culture of Te Arepa’s family, to the upper crust of his friends Steph, to the lower class car culture of Mitch and his probably-not-entirely-within-the-law junkyard father, to the casually racist farming culture of “Wingnut” and his family.

This last one really sounded familiar - just substitute “Native American” for “Maori,” and Wingnut’s grandfather sounds a lot like many here in the US.

It is easy enough to see why certain groups got all up in arms. There is some sex, and it is reasonably graphic. There are drugs. And there is language. But there are also racial issues presented, which is why the book won several awards in New Zealand. I would also say that it has some subversive ideas - particularly a distrust of institutions, of adults, and of class and race based social structures. From my experience in Fundamentalism, I would say that it was probably was these subversive ideas and exposure of racism that proved to be the unspoken motivations for the campaign against this book. Sex (like magic) is often a pretext for keeping challenges to authority and white hegemony out of the hands of the kiddos.

I thought that the opening of the book, with its insight into Maori culture, was pretty strong, as was the scene on the farm. Dawe writes well and efficiently in these moments, and makes the settings come alive. I didn’t like the way the book ended, mostly because it seems more of a cliffhanger than anything. We know Te Arepa’s choice, but nothing of his plans - or lack thereof. We are left to guess at his future in kind of a “lady or the tiger” way. I’m not a fan of that approach at all, I’m afraid. Just my preference.

I also felt that the alienation was a bit extreme. One would like to think that Te Arepa would have someone who doesn’t let him down in a big way in his life somewhere. The world isn’t quite that dark and friendless - although I guess it is easier to feel that way at a certain age. It just made the book - and its ending - feel unmoored.

It was an interesting read, and worth the time, but not one of the best I have read this year. I am glad I explored the history, however, as it sheds light on our instinct toward censorship in our modern era.

From PBS, this article on what causes books to be challenged here in the United States is interesting. Primarily genitals and racial issues.

Posted by Diary of an Autodidact at 8:16 AM