A combination of camping and my concert schedule kept me from attending the last three book club meetings. I made this one, though.

Andy Weir is best known for writing The Martian, which became a popular movie. The premise of this book looked interesting, and it got enough votes for our club to choose it this year. 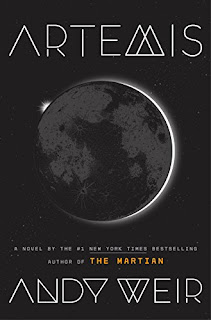 Artemis is definitely genre fiction, not literature, but it works pretty well for what it is intended to be.

Artemis is a moon colony, established by a Kenyan company who managed to solve some of the technical problems in getting enough mass into moon orbit. In this version of our world, earth nationalities have essentially become professional guilds (or monopolies) when it comes to the colony. The Kenyans have the transport monopoly - and essentially own and rule the place. Brazil...okay, the Brazilian mafia...runs the aluminum smelter which provides the building materials and oxygen for the colony. And, the Saudis run the welding guild. Jazz Bashara is the protagonist, and she is the daughter of a skilled welder. She’s the black sheep, and kind of but not quite estranged from her father.

She works officially as a porter, and unofficially as a smuggler. Things like cigars are her main trade - anything flammable is forbidden on Artemis. She aspires to be able to join the EVA (spacesuit) guild, and lead tours. This more lucrative job could let her escape her poverty.

Then, she gets an offer she can’t refuse from wealthy businessman Trond Landvik - a rather sizeable fortune. All she has to do is sneak out of the city, hitch a ride to the place the automated rock harvesters are working, and destroy them. So that Landvik can take the oxygen monopoly away from the Brazilians. Which might have to do with a mysterious new technology. No big deal…

Naturally, things don’t go quite according to plan, things blow up, people get whacked, and Jazz is a target of the mafia.

So, first the good. Wherever science comes into the book, it is at least plausible. I am particularly impressed when the chemistry isn’t laughable. (Seriously, chemistry is almost as much of a black box to most authors as math.) Most of the science and technology is believable, and seems to be the way that it would develop in real life. Thus, things mostly work, but they are utilitarian, not objects of great beauty and sophistication. Cost and weight are more important than either style or engineering perfection.

The plot idea itself was interesting, although not spectacular.

Where I felt the book was weakest was in its characterization. Weir doesn’t really make characters who feel like real people rather than types drawn from central casting. I realize this is a standard thing in genre fiction as a general rule, but it still was a bit of a letdown. Given another 100 pages, perhaps an author used to writing complexity might have improved things. As it was, Jazz feels like a cookie cutter hero, with her gender, race, and religion there as accessories like her boots or purse. And likewise with the other characters. Weir could have avoided describing them altogether, and they wouldn’t have lost much. I can’t even really remember who was gay, and which eastern European country the computer geek guy came from. So that part was disappointing.

There were also some really awkward scenes that seemed thrown together with just enough in sexual references to check off the PG-13 list. It got in the way of the narrative without adding any real depth. It is an imperfect book in that sense.

On the other hand, the last few weeks have been filled with a lot of symphony stuff - including time I had to spend learning Petrushka and Rachmaninoff’s Symphonic Dances. Great works, but really challenging. So my brain power was in decline in the evenings, and it was nice to have something light and easy to use to wind down.

I should also mention a couple of things regarding food and drink. Since growing fresh food is challenging in space, ordinary people got by on “gunk,” an algae flavored with various substances. I was reminded of an Isaac Asimov short story, “In Good Taste,” in which ordinary food was replaced entirely by “prime,” a fungus-derived food, which is flavored by chemicals. The point of that story was the competition to come up with new and delicious flavors using computer-driven molecular synthesis and careful blending. But the winner is disqualified when the judges discover he has used real flavors from things which actually grew in dirt (gross!) So that was an interesting parallel. I’m not sure which is more realistic: unappetizing food for working class people - or an industry devoted to making addictively tasty synthetic food.

The other food related touch was kind of fascinating. Because liquids are heavy - and thus not efficient to ship by rocket - alcohol is made by reconstitution. Alcohol powder actually does exist, but isn’t commercially available yet as far as I can tell. (And it has some significant safety risks, to say the least…) Weir gets this right, for the most part. I agree that, in general, the flavors would be suboptimal. Kind of like the difference between fresh milk and powdered milk. However, the idea that beer is the closest to drinkable, while the hard booze is far worse seems to me to be backwards. The more alcohol, the easier to mask poor flavors. Has Weir never had a shot of Everclear? Or store brand vodka? I would also say that it seems that beer could be brewed on the moon more easily than the others. Barley and hops aren’t that inefficient. Someone would be willing to pay for the good stuff, in any case. It is telling that every civilization seems to have developed some form of wine or beer as one of its first inventions.

Anyway, not my favorite book of the year, but not a total dud either. Light, genre fiction, with some good, some not so great, and not a big time suck.

Posted by Diary of an Autodidact at 9:17 PM