Be Frank With Me by Julia Claiborne Johnson

This was this month’s selection for our “Literary Lush” book club. One of the things I enjoy about this club is that I end up reading interesting books that I never would have discovered on my own. This book certainly qualifies, as I had never heard of it before it was nominated for the club.

A little backstory might be interesting here. One of our members has a grandchild who attends college with the author’s daughter - so that’s how we discovered the book. 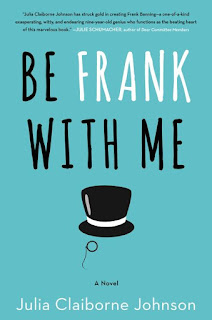 Be Frank With Me is a bit of an unusual book. It is fiction, although according to the author’s daughter, the central character is based in significant part on the author’s son. It resembles - to me - more of an extended short story rather than a novel in that there isn’t really much of a narrative arc. Things happen, and there are a few developments, but it doesn’t feel like any of the characters change in any significant way, and there doesn’t seem to be - to me - anything that would constitute a true turning point.

Frank is a 10 year old boy. Although it is never said, he is pretty obviously on the autism spectrum. This was a puzzling thing about this - and other books and media - for some reason, autism is portrayed but rarely if ever named. Instead, he is labeled “eccentric,” like he was an 18th Century aristocrat or something. Since this is the 21st Century, one would think that we wouldn’t hide diagnosable conditions behind euphemism or obfuscation anymore, but apparently not. Frank’s mother, Mimi, is a novelist famous for her one great work, written when she was very young. After the success of the novel, she went into hiding, or less, and never published anything else. In some ways, she appears to be a nod to either Harper Lee, or J. D. Salinger. Lee in that the one book made her fame and fortune, but Salinger in the nature of the book, which appears to be a coming-of-age story.

Mimi is pretty thoroughly dysfunctional, both because of her screwed up parents, and the fact that her “eccentric” brother committed suicide by jumping out her dorm window. Whatever the case, she had Frank by sperm donor, and seems fully incapable of actually parenting him. Frank, odd as he is, seems as much or more of the adult in the family.

When Mimi loses her fortune to a scam artist, she is forced out of retirement to write a new book to pay her bills. Mr. Vargas, her agent (and possible past lover), knows he will have to find a way to keep Mimi on track. Enter Alice, the narrator. She is a mid-20s woman still trying to decide what to do with her life - she has an accounting degree, but considers that job to be settling for being an old and boring person. Mr. Vargas sends Alice to be, essentially, a combination of a nag and an au pair for Mimi and Frank. Her duties range from cooking to driving to entertaining Frank - no small job.

Frank has a few weird obsessions. He dresses in old fashioned clothes. Think cravats, top hats, flannel suits, and the like. It’s all out of his other obsession, which is old movies, which he has virtually memorized. He also freaks out if he or his possessions are touched. He is bullied at school, but has no coping skills other than pretending to have seizures or go catatonic. He naturally has a tendency to get into trouble with...whatever is at hand.

For her part, Alice is unprepared for the task. She has no relevant training, and plenty of her own family dysfunction to work through. She bumbles through her interactions with Frank before she figures him out a bit. This process isn’t helped by the fact that Mimi appears to hate her, and undermine her at every step.

The other main character in this drama is Xander, a recognizable flaky sort. He serves as the occasional handyman for Mimi, fixing stuff, teaching Frank piano, bringing a bit of brio to the household. But then he just disappears regularly without warning, can’t be counted on at all, and hasn’t apparently grown much beyond his teenage years. So, the sort who thinks illegal fireworks are a great present for a 10 year old, and plans a birthday party that he then gets Alice to do all the work for. Of all the characters, I think have met more Xanders than I can count. It turns out, naturally, that he and Mimi connected through their mutual trauma of losing a sibling under guilt-inducing circumstances.

The yet-to-be-written book serves as the MacGuffin. It exists to give the circumstances of the novel a reason to happen. Mimi needs to write the book, so Alice has to come help out. Mimi needs to spend time with her typewriter, so Mimi has to be essentially Frank’s sole caregiver. Mimi’s book takes her away from Frank, so he acts out more than usual. When Frank halfway burns the house down with the fireworks, Mimi’s book seems to have been destroyed. Frank’s obsessive turn as the “family historian” leads him to steal the book (and the others she wrote but tried to throw away) and secret them away, saving them.

In this way, the book seems to be more like an extended short story. It gives a picture of an interesting person - Frank - and the people that are in his orbit. And by that standard, it is a rather effective - if long - story. It draws you in, and you want to learn more. The characters are interesting and believable. But at the end, when it essentially just...ends, you are left with the feeling that there should be more, not just a picture. Maybe it is a matter of expectations.

There is one exchange that perhaps captures the essence of Frank best. It comes after a huge incident early in the book. Frank has launched himself at his mother, after she finally emerges from a day of writing. Unfortunately, he knocks her into a sliding glass door, which shatters, and lacerates her enough to warrant a night in the hospital. And also gets blood on Frank’s outfit.

Mimi, exhausted, tells Frank to get undressed, and soak his clothes so the blood won’t stain. She crashes before she can follow up. In the meantime, Frank gets the idea of just wearing the clothes into the bathtub, and then falls asleep himself.

“You almost gave me a heart attack, Frank,” I said. “I thought you were dead. What are you doing in the tub with your clothes on?”
“Sleeping. I thought it would save you work if I soaked my clothes while I soaked myself.”
“Are you insane?” I regretted saying that instantly.
“No,” he said. “See? I took my boots off first.” He lowered his goggles over his eyes and went under. He watched my chin while I watched the water fill the goggles.
“Those aren’t watertight,” I said when he came up for air and pushed his goggles up his forehead.
“I know. I was just confirming earlier research.”
“Listen, Frank, I’m sorry I said that you’re insane.”
“You didn’t say I was insane. You asked. One is a statement and the other is the question. You’re not the first to ask me that, either.”

Such is life with Frank, who is frustrating and endearing. Personally, I would have approached raising him a bit differently - but I am obviously not Mimi, in a whole variety of ways. It was interesting that a number of our book club members either have autism spectrum family members (my wife is one of those), or who work with spectrum children. It made for quite the lively discussion of Frank - and the other likely autistic members of his family. Johnson gets the details right on many things, from the specifics of Frank’s reactions, to the school administrators who try to avoid making a diagnosis which would require them to actually deviate from their rigid procedures - and who treat Frank as if he were a “problem kid” with bad morals, rather than working from a different operating system, so to speak.

Be Frank With Me is an interesting book. With the caveats about expectations already mentioned, it is worth reading.

Posted by Diary of an Autodidact at 7:50 PM