What Are You Looking At? by Will Gompertz

Source of book: Borrowed from the library - but I want to get my own copy

Before I started this blog, I read a book that I consider to be one of the most enlightening I have ever read. That book is The Rest is Noise by Alex Ross. I play classical violin professionally, and had a pretty good baseline music education. But Ross was able, in his history of modern classical, to bring a new perspective - and appreciation - to my understanding of 20th Century music. 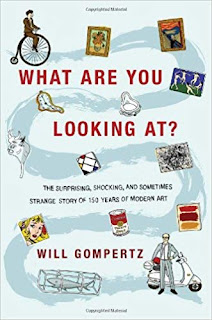 In the same way, What Are You Looking At? gives a history and perspective on modern art that is truly helpful in understanding the meaning and significance of an often maligned subject. Although my knowledge of art is, perhaps, not as extensive as music, I do not consider myself to be a neophyte. I have a pretty good collection in my library of art and art history books. We live within a reasonable distance of several world-class art museums. (The De Young in San Francisco, the Getty, Hammer, Norton Simon, and LACMA in Los Angeles, the Timkin and San Diego Museum of Art, to name just the ones we have been to.) In addition, I have spent several days in the Louvre, a day at the D’Orsay, and a day at Versailles. Between all of these, I have seen quite a few masterworks in person. (Most recently, a travelling exhibition of late Monet at the De Young.) So, I have some experience and knowledge.

That said, I, like many, have found the experience of modern art to be a bit confusing - even when I found myself moved. What Are You Looking At? is essentially a layman’s introduction to the different movements in modern art, and their goals, major works, and major artists. For myself, I found that I knew some of the information already, but it was helpful to put things in full context. I should mention as well that my 13 year old son has been reading this too, and says he is really enjoying it.

Will Gompertz is currently the arts editor for the BBC, and served as a director at the Tate gallery for seven years. He has also spent 30 years writing about art. These experiences make him particularly qualified to write this book. He knows his art, but he also writes in an understandable manner, without the purple prose and obfuscatory language that makes many art critics incomprehensible to anyone outside the clique.

Gompertz makes a crucial decision in how he starts the book, which I thought was brilliant. First, he introduces perhaps the best known (or infamous) incident in modern art history: the creation of Fountain by Marcel Duchamp. (If you aren’t familiar with it, it is a urinal repurposed as art - it is still hard to believe it happened way back in 1917, and modern art ever since has been in many ways a reaction to that shockwave. )

From there, he starts where any history of modern art should: with the Impressionists. For many people, “modern art” starts with, say, Picasso, or even with Duchamp, while Impressionism is grouped with “classic” art. But nothing could be further from the truth. The journey that art would take in modern times does indeed start with the break that the Impressionists made from the old way of doing things. Rather than attempting literal representation, the Impressionists sought to create a deeper, artistic truth. This, and the break from aristocratic patronage, set a new course. It is more complicated than that, of course, and Gompertz explains it better than I do.

There are a few quotes or passages that stood out as particularly relevant to me. First is on the way that titles are given after the fact. In discussing the Post-Impressionists (van Gogh, Gauguin, Seurat, and Cezanne), Gompertz notes that none of them would have considered themselves Post-Impressionists, for the simple reason that term wasn’t coined until they were all dead. Gompertz then discusses the problem inherent to the issue: how to describe an exhibition in a way that draws people in, while also meaningfully describing the art. He opines that this highlights a central tension in the art world: “public engagement versus scholarship. Curators and artists recognize the helpful role the media plays in communicating their ideas to a skeptical, non-specialist public, but in all honesty most would rather not bother. And they would rather have rusty nails poked in their eyes than acquiesce to an  exhibition title that might humiliate them in front of their peers by being remotely ‘populist.’”

I also liked the use of a van Gogh quote about art, namely the modern “distortion” of reality in representation: “I have a longing to make such incorrectness, such deviations, remodelings, changes in reality, so that they may become, well -- lies, if you want -- but truer than the literal truth.” In this sense, for van Gogh, painting aimed to be poetry, a truth beyond literal truth.

One chapter that really blew my mind was the one on Futurism. I will confess that this was not a movement I really was familiar with. Gompertz quotes Filippo Marinetti, the provoquer who wrote a manifesto for the movement - a manifesto which was proto-fascist.

“We wish to glorify war -- the sole cleanser of the world -- militarism, patriotism, the destructive act of liberation, beautiful ideas worth dying for, and scorn for women.”

Yikes. And yes, this was in the run-up to the rise of Fascism in Europe.

On a more positive note, Gompertz really explains abstract art better than any other writer. He makes the observation, obvious in retrospect, that abstract art is an attempt to make the visual arts into an analogue to music: art, expression, emotion, beauty in its pure form, unencumbered by the needs of literal representation. It is the equivalent of a Mozart symphony - it isn’t “about” anything. It is music for music’s sake.

I also have to quote Gompertz’ analysis of the the Soviet “non-objective art” movement.

In terms of global influence and longevity, the Russian artists beat their politicians hands down. Communism caused a cold war with the West, could have ended in Armageddon, and eventually failed. Whereas non-objective art gave form to twentieth-century modern design and provided the basis for Minimalism to emerge in America around fifty years later, a development that is not without irony. While the politicians embarked on a cold war, art was demonstrating that the two countries influenced each other more than either cared to acknowledge.

And in a way, Gompertz is spot-on. Most of what we take for granted as “modernist” design - the very language of our buildings, appliances, fonts, brands, and so on, show great influence from the Russian artists.

I will end with an observation of one of the reasons Gompertz is successful in this book. At the outset, he defuses one of the most enduring criticisms of modern art: that it is a sham foisted on the gullible public. Gompertz makes the cogent point that one need not “like” a particular work of art to understand its significance or its place in history. In fact, he gives full permission to dislike a work of art, or an artist, or a movement - and not everything ages well. We may well look back on this era and reevaluate which artists were truly great. But understanding how it fits together can make sense of what is considered great from our own time. I personally find this useful. I love art, as a general rule. But there have always been artists and eras that, while I appreciate that they are art, fail to move me. One example of this is a certain Baroque style, with the cherubs and allusions to Ovid, and so on. Great art? Probably. Do I enjoy it? Not really. Ditto for some modern art and styles. Just not my thing, and that is okay.

Gompertz succeeds in his goal, which is to make sense of modern art and the threads that run through it. (Or, perhaps I should say, rail lines? One of the great things about the book is a map of modern art, modeled after the London Tube map. Seriously, it’s great. 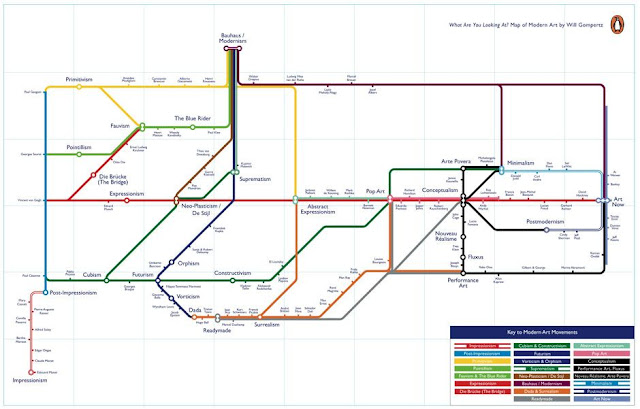 I do intend to find my own copy of this book - it can be the companion to my copy of The Rest is Noise, where I can look up artists and ideas whenever I want to refresh my memory of where things fit. It is a truly outstanding book, and helpful to any lover of art who wants to better understand the last 140 years.

Not that anyone asked, but here are my favorite artists, in roughly chronological order. I have prints of some of these at my office.

1. Albrecht Durer. I must have been in single digits when I first experienced his work. I love it all, from the realistic magic of The Large Piece of Turf to his allegorical works.
2. Rembrandt. I have seen several of his paintings in person. There are no words to adequately describe the emotional impact. He is the visual equivalent of Dostoevsky, probing the darkest corners of the psyche of his subjects.
3. Goya. Again, hard to put into words how these make me feel. He went to some dark places, but in a genius way.
4. Delacroix. I usually get a blank look with this one. Which makes me sad. The Louvre has an outstanding collection of his paintings, and they are nothing short of spectacular. Liberty Leading the People is perhaps the most famous - for good reason - but literally everything of his I have seen has struck me with his amazing technique and vision. Each feels like a novel in itself, with a compelling story.
5. Van Gogh. Call it a cliche if you wish. His works speak to me at an emotional level. And seeing them in person is an experience not to be missed.
6. Cezanne. Again, this is definitely at an emotional level. I can’t even entirely explain it. I find my eyes drawn to his works in any gallery.
7. Braque. My favorite Cubist. Again, I find my eyes seeking out his work - there is something about his art that draws me in.
8. Frieda Kahlo. I love her works, particularly the allegorical stuff.

These are the ones that I like best, but by no means are they the only ones I like. Art, like music, literature, poetry, and nature, are what inspire me, and make life more than a grinding routine.
Posted by Diary of an Autodidact at 10:27 PM