Aunts Aren't Gentlemen (aka The Cat-nappers) by P. G. Wodehouse

Source of book: I own this in both print and audiobook form. We listened to the audiobook on a recent trip.

I have read quite a few of Wodehouse’s books over the years - he is my favorite humorous author. One can usually count on his books to be entertaining, witty, and utterly ludicrous. In any event, here are the books I have reviewed on this blog, along with an introduction to the author himself:

Introduction to P. G. Wodehouse
Uncle Fred in the Springtime
The Adventures of Sally
Biffen’s Millions
Thank You Jeeves
The Uncollected Wodehouse
Love Among the Chickens
Jeeves And The Mating Season
Summer Lightning
Cocktail Time 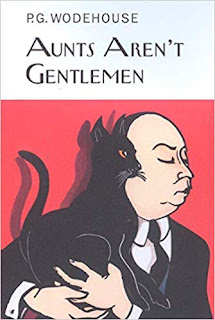 This book, like many in the Wodehouse universe, comes with two names. The original name in Great Britain was Aunts Aren’t Gentlemen, while the American edition was re-named The Cat-nappers. Whatever you wish to call it, this book was the last one Wodehouse finished before his death, capping nearly 75 years of writing.

Aunt’s Aren’t Gentlemen is a Bertie and Jeeves novel, featuring the hapless aristocrat Bertie Wooster and his brilliant valet Jeeves. An unexplained rash leads to Bertie being advised to seek rest and clean air in the countryside. He meets up with his Aunt Dahlia (not to be confused with the terrifying Aunt Agatha), and sets out to have a relaxing time. This, of course, does not occur, because hijinks ensue.

It turns out that, in addition to Aunt Dahlia, others of Bertie’s acquaintance happen to be in the neighborhood. His schoolmate (now a communist agitator) Orlo J. Porter has come to court Bertie’s ex-fiancee Vanessa Cook (now a feminist protester in her spare time). Vanessa’s father disapproves of Orlo, which is why she has been ordered back to the countryside by her father, who also takes a strong dislike to Bertie.

Mr. Cook also has a rivalry with Colonel Briscoe, a friend of Aunt Dahlia’s, over their racehorses, who are set to race in the near future. Aunt Dahlia has foolishly bet a large sum on the Colonel’s horse, and needs to be sure of her victory. To this end, she hires a local poacher to steal a certain cat (friends with Cook’s horse) so as to disrupt the training process. Naturally, this goes very badly, in part because cats go where they want once you let them free. In the meantime, Vanessa, frustrated with Orlo’s timidity, breaks it off with him and gets engaged again to Bertie, who does not want to marry her, but, well, he is Bertie and that’s how things go.

It will be up to Jeeves once again to unravel the tangled web and set things right.

As with all Wodehouse books, there is sparkling dialogue, witty repartee, a ludicrous plot, miscommunications, and slapstick humor. One thing I did notice is that Bertie seems a bit less stupid in this book - he actually manages to avoid trouble in some cases, and isn’t completely reliant on Jeeves for survival. I guess even he grew up a tad. Well, not that much, perhaps, but he isn’t stealing police helmets any more. To compensate, there is more equality in the witty exchanges with Jeeves, and the two seem partners in the sport of laughing at everyone else in the book.

Because Aunt Dahlia is a key character, the nature of Bertie’s interactions are a bit different as well. While he is always trying to stay away from Aunt Agatha and her schemes to get him married, he is rather fond of Aunt Dahlia, despite her tendency to need rescuing from her own overreaching. Thus, you get lines like, “a hearty good morning to you, aged relative.”

When it comes to Wodehouse audiobooks, there are really only two choices: Martin Jarvis and Jonathan Cecil. I have listened to both, and they both outstanding. Perhaps I would lean toward Cecil for Jeeves, but Jarvis for Lord Emsworth. But that is a matter of taste. You simply cannot go wrong with either of them. Aunts Aren’t Gentlemen was read by Cecil, and was predictably delightful.

We greatly enjoyed this book, and can recommend it as a good place to start with Wodehouse.

Posted by Diary of an Autodidact at 5:20 PM