She Kills Monsters by Qui Nguyen

She Kills Monsters is another of the offbeat productions that local theater, The Empty Space, puts on as part of its season. I was not familiar with it, but it sounded interesting - and the sort of thing my two eldest teens would enjoy, so we went.

The basic premise is this: Agnes Evans is a young teacher reeling from the death of her parents and younger sister in a car accident. Going through their things, she finds a mysterious book written by her sister Tilly. This book turns out to be an “adventure” for Dungeons & Dragons that Tilly put together before her death. (As we find out later, Tilly had hoped someday to bring Agnes into her world using the adventure, although she expected to be alive and play along in person.)

Agnes takes the book to the local D&D type store and enlists the seriously nerdy Chuck Biggs (“I’m big where it counts!”) to serve as dungeon master and walk her through the adventure. The adventure comes to life on stage, though, with Tilly and the other characters - and the monsters - portrayed by the actors. In the process, Agnes learns about the sister she never really knew - or cared to know. So, feels and things. But also monsters, sword fights, and a lot of humor. While the premise is inherently tragic, the play is a comedy, or at least a comedy-drama, and the laughs come early and often.

The dramatic elements were kind of predictable. Brownie points if you guessed that Tilly’s sexuality would be a discovery, that Tilly was beloved by the marginalized kids but tormented by the popular girls, or that Tilly had a love/hate relationship with Agnes. More subtle was the handling of normal teen stuff. Tilly used the adventure to play out her own fantasies - and those of her friends. “Kaliope” (I can’t remember her actual name in the play, just the character) gets to overcome her disability. “Orcus” gets to be scary and powerful rather than hopelessly dorky. Tilly gets to cast her high school nemeses as “bosses” to be destroyed - and also Agnes’ innocent and unwitting boyfriend Miles.

If the plot was a bit predictable, it was a serviceable vehicle for the humor, which was, in my opinion, the best part. Even my second daughter, who is pretty cynical (she was that way as a toddler, and teenhood hasn’t made her less so) laughed the whole way through. After all, D&D is fundamentally hilarious. As my older daughter said, if you think about it, the whole premise is pretty funny and ludicrous. That isn’t a bad thing. Fantasy is fun, and we humans have always had imaginations. The fact that the Society For Creative Anachronism exists is both amusing and awesome. So we both admire and laugh at things like D&D.

The humor fell mostly into two categories. First was the general “dorks are funny, and non-dorks trying to be dorks are even funnier” kind of joke. The second was the fact that fantasy is a fertile ground for sexual innuendo. Then, combine dorkage with double entendres, and you have twice the fun. (Case in point, Chuck Biggs and “I’m big where it counts”: he is referring to his brain, but, well, you get the point.)

I’ll just mention a few of the best jokes. The first is when Agnes is trying to figure out how to play the game, and keeps fighting against the dorkiness. She is expected to choose a proper name. She insists on using “Agnes.” Eventually, Tilly (in the game) tells Agnes to stop being such an asshat. The narrator then explains that “Thus she came to be known as ‘Agnes the Asshatted.’” From then on, whenever Agnes is in the game, she wears a beanie with “#ASS” on it.

Another series of hilarious moments come when poor Miles walks in on Agnes and Chuck playing, and thinks they are cheating on him. Chuck makes it infinitely worse by his “explanation” which makes sense in the D&D world, but is naughty as hell in the real one.

I also laughed when “Lillith” walked in, and Agnes takes one look and says, “What the HELL is she wearing?!”

As usual, The Empty Space brought high artistic values to this play. The set was minimalist but effective. (Basically, a broken brick wall at the back, and paving stones resembling a D&D module painted on the floor. And a counter and two chairs.) The actors brought the usual intensity and commitment to the dialogue.

The lead, Agnes, was played by Claire Rock. One reason I wanted to see this was that Rock was fantastic as Tybalt a few years ago. This time, playing the straight (on multiple levels) woman, she nicely captured the experience of a “normal” person jumping into D&D unprepared.

As Tilly, Stevie Mcnabb was also compelling. I give her further bonus points for outstanding fantasy hair.

Thor Reese (which, ironically, is a better fantasy name than his character, Chuck Biggs) was hilarious as Chuck. It can’t have been easy to deliver all those unintentionally funny lines with a straight face and an innocent air. Also, Reese’s bio in the program is outstanding:

Thor Reece (Chuck Biggs) was born in the back alleys of the city of Waterdeep. Thor learned the art of stealth at a young age. As a member of the deadly assassin group “All The King’s Players,” Thor did many unspeakable acts. In order to practice and hone his ability to blend in Thor would take on the task of assuming the identity of a common pastry chef. Soon Thor would move on and do battle with the army of zombies raised by the wizards of Thay. Finally, to complete his training in the art of blending in Thor would take on the role of a clothing merchant. With all of this training, Thor has truly become a force of nature in the battlefield and in all adventures he takes on.

Special mention to the others in the cast, TES regulars Cheyenne Reyes (Lillith), Jenna Fernandez (Kaliope), and Breanna Alcala (narrator and Vera, the world’s worst high school guidance counselor.) There were a number of new names in bit parts as well, plus a whole crowd of multipurpose monsters and villains. Well done, one and all. 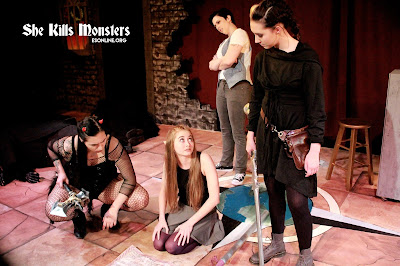 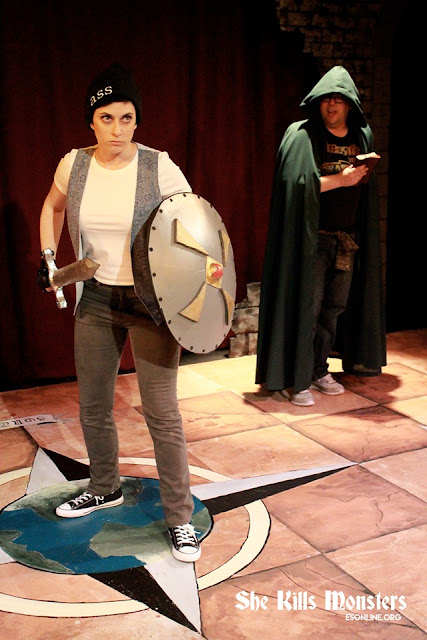 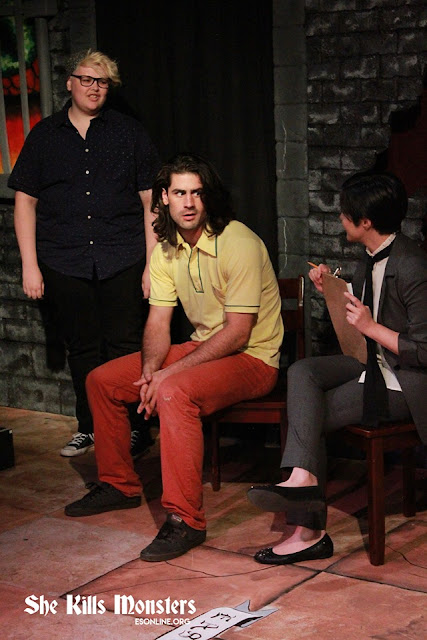 This show runs this weekend as well, so if you are local, go out and see it.

My history with Dungeons & Dragons.

I have mentioned a time or sixteen that I was raised somewhat Fundie. This is one area in which it manifested. My parents were really into Jack Chick and his propaganda tracts. (Among other things, they are anti-science and viciously anti-Catholic.) I wince when I see them at their house, and have had to have conversations with my kids about them.

Anyway, Chick did a few on the supposed demonic nature of Dungeons & Dragons. The game would give you demons! It would make you commit suicide! It would make you nerdy! Okay, I made the last one up - and it is the only one that is true. Later, in law school, a friend explained how the game worked, and a light came on. It was nothing more than a sophisticated and highly imaginative social game that happened to contain elements of “magic.” Which was, I guess, witchcraft by definition. Ugh. So yeah, changed my mind once I discovered the facts.

We have played a few adventures, set up by a couple of friends who are more into it than that. The kids had fun. It was cool. Thanks, Erik and Darren!

This does fall in the category of “outright lies I was fed by Fundies as a kid.” Which is one reason I really don’t believe a thing Fundies say anymore.

Posted by Diary of an Autodidact at 4:17 PM