This book is part of out not-particularly-systematic exploration of the Newbery Award winners and honor books. Hello, Universe is the most recent winner, from 2018. In addition, this book is part of my personal project as homeschool dad and aspiring decent human being to introduce my kids (and myself) to books written by non-white authors. Kelly is the daughter is the daughter of a Filipino immigrant mother, and started her fiction-writing career rather later than many. 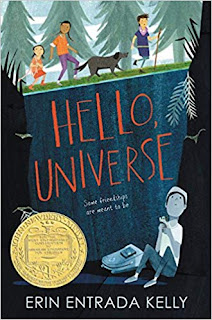 Hello, Universe is a story told from four different points of view, those of four middle school kids. Virgil Salinas comes from a rather sports-crazy Filipino-American family. He is painfully shy, quiet, and unathletic, which makes him the odd kid out in his family. Fortunately, his grandmother understands and supports him. Valencia Somerset is mostly deaf - she can hear a tiny bit with aids, and can combine that with lip reading to understand people, as long as they talk slowly and look directly at her. She is smart and strong and familiar with the natural world. But she has been dumped by her friends because they couldn’t be bothered to accommodate her deafness. She puts on a brave face, but she is lonely. Kaori Tanaka is an aspiring entrepreneur who fancies herself a psychic, although she mostly seems to be a good listener. She is largely responsible for her little sister, Gen, who follows her around and insists on being involved in everything. Chet Bullins is the school bully, who torments Virgil and Valencia. He has his own problems, though, with a dysfunctional mother, an uninvolved yet pressure inducing father.

Virgil has been consulting with Kaori about his problem: he is too chicken to say hello to the girl he admires in his study hall - namely Valencia. Kaori, looking to expand her business without her mother stopping her, puts ads at the store, one of which is seen by Valencia. Virgil and his pet guinea pig set out through the patch of woods to visit Kaori, but is set upon by Chet, who steals his backpack and throws it down an abandoned dry well. Virgil becomes stuck in the well trying to rescue the backpack - and his guinea pig. (In the “weird coincidences file: this is a parallel to The Wind-Up Bird Chronicle, which I just read. Although Kaori would be quick to assert “there are NO coincidences!”) Eventually, Kaori realizes that Virgil has disappeared, and sets out with her new client, Valencia, and Gen, to find him.

In addition to this main plot, there are, interspersed throughout, stories from Filipino folklore told by Virgil’s grandmother. While Virgil is stuck in the well, he is visited both by a malevolent creature, and by the plucky heroine of one of the stories - his ancestor. In this sense, the book contains elements of Magical Realism, although the book remains firmly grounded in this world.

There are elements of this book which I really liked. In general, the characters are interesting. Virgil is portrayed with the most detail - one could say the book is mostly about him. It is his experience of the Filipino legends and his internal struggles against the disapproval his family and the cruel world fling his way are the core of the story. Even Chet gets some nuance, despite being generally from the ACME villains catalogue. Valencia is very relatable. She is naturally strong and tough, but has trouble admitting that she is lonely and sad. Kaori is the comic relief a lot of the time, although on her part, the comedy is unintentional. She takes herself just a bit too seriously.

Also rather funny was the episode involving Chet and the snake. We hike regularly, and have seen plenty of snakes, venomous and not, out on the trail. Like Valencia, and unlike Chet, we know how to treat snakes - with respect. (I appreciated that Valencia’s advice on snakes was accurate, by the way.)

The weaknesses of the book as I see them are twofold. First, despite Chet getting to narrate, and getting enough backstory to be more human, he never gets the chance to grow or develop. He gets a bit of a comeuppance, but we are left without knowing if he learns anything from the experience. His narration is the shortest of any of the characters, and it feels a bit out of place, in my view. It would have been a better book had he been given some manner of growth or at least a final word after the events to reflect on the meaning of his experience. Instead, he just kind of fades away.

The second weakness is the abrupt and too-neat ending. We are given the impression that Kaori and Valencia will be fast friends. And we know that Virgil, having failed to even say thank you after the rescue, finally screws up the courage to text Valencia. But it would have been interesting to add a little to the story and see what happens next. I mean, you have a big event that clearly had an impact on all the characters. The book isn’t that terribly long. Why not add just a bit more and let us see the aftermath and how the characters have changed?

I’ll end with the best line in the book. Valencia is reflecting on the unpleasant way she was dumped by her former best friend. Valencia actually likes the book, but the thought behind it bothers her.

This is, in a way, related to another strength of the book. The characters are diverse. Virgil is Filipino-American, obviously. Kaori and Gen are Japanese-American. Valencia is deaf. But as Booklist pointed out, the diversity isn’t treated as a plot point. It just is a fact. I mean, in the one sense, the deafness is important to the plot as it unfolds, but it is a case where the character exists as a fact, and thus will respond to circumstance exactly as she naturally would. The plot serves the characters, not the other way around. (Actually, Kelly said that the book started with a kid in a well, then found characters, and the plot flowed from there.)

Overall, this is a worthwhile book, and my kids found it interesting.

The audiobook was read by two narrators, Ramon de Ocampo, and Amielynn Abellera. I am not familiar with either of them, but apparently they are veterans of television and audiobooks. They did fine, with Ocampo clearly at home with the Filipino accent. (My father was born and raised in the Philippines, and I was involved in a Filipino-American church in Van Nuys for a number of years as a teen. And, I can cook Pancit and Adobo pretty darn well.)

Posted by Diary of an Autodidact at 9:40 PM

Email ThisBlogThis!Share to TwitterShare to FacebookShare to Pinterest
Labels: Fiction, friendship, Reading With my Kids