Ready Player One by Ernest Cline

This was this month’s selection for our “Literary Lush” book club. One of the things I enjoy about this club is that I end up reading interesting books that I never would have discovered on my own. This book is definitely in that category as I would never have picked it up on my own. 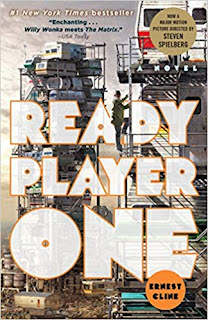 It would be fair to say that I was pleasantly surprised by the book. I didn’t have that high of expectations since I am not really a pop culture maven, and I’m not really in to genre fiction. First, the bad stuff: there are a number of places where the writing is awkward. The characters aren’t particularly well developed, although that is rather par for the course with most genre fiction, particularly ones centered on action. The interpersonal interactions were particularly wince worthy. Cline doesn’t seem comfortable writing offline dialogue.

On the other hand, the book flows well, and makes for a compelling read. Although I will admit I didn’t get all the references (my family didn’t watch movies hardly at all during the 1980s), I was enough of a computer nerd to appreciate a good number. To a degree, it was a nice nostalgia trip back to the days of huddling over a computer - either our Commodore 64 or our cousin’s Apple - with my brother and cousins playing text-based games or dungeon style stuff like Gauntlet.

The universe in Ready Player One is well thought out. It is a dystopian future (like roughly half of new books these days it seems…), and a rather plausible one. A combination of environmental and economic factors have mostly destroyed society. Fossil fuels have run out, so vehicles are useless for the most part. Most people are deeply impoverished, and jobs are hard to come by. Children, at least, get food credits, so they don’t starve. The protagonist, Wade, lives with his aunt in “the stacks” - large towers of mobile homes and RVs which were created to make easy density within walking distance of public transit. But where Wade - and indeed most people - really live is in virtual reality. A system called OASIS is essentially the world of virtual reality, and contains millions of “planets” with different things to do on them. (To even begin to describe a few of them would take a chapter.) Even schooling for many is done in this reality. As our club - which contains a number of teachers - discussed, a lot of the features in this virtual school sound pretty cool, actually. Certainly, the fact that the student avatars can’t disrupt class or surf on their phones is a nice change from reality.

The creator of OASIS dies, and leaves his vast fortune to whoever can first successfully complete an elaborate quest he has left behind. Because the prospect of becoming the richest person in history has a lot of appeal, millions join the quest. They are hunting for what is essentially, the greatest “Easter Egg” ever. They are dubbed “egg hunters” - or “gunters” for short.

Because the creator was really into the 1980s, the gunters become serious students of 80s pop culture, hoping to find the clues necessary to lead them to the prize. In a very real sense, the creator becomes god, and his followers immerse themselves fanatically in the scriptures - the creator’s journal and those things known to be the creator’s favorite games, movies, songs, and so on.

For five years, nobody makes any progress. Then, Wade is able to solve the first riddle, and the game is on. Four other gunters are successful in clearing the first “gate,” and become the main competition to the IOI Corporation, a sinister global entity intent on taking over and monetizing OASIS. Two of these are particularly central to the story: Wade’s best - perhaps only - online friend, Aech (that’s the screen name - we don’t find out the real name until near the end), and Art3mis, a blogger who Wade has a huge crush for.

The bulk of the book is a fast paced narrative of the quest from Wade’s point of view. It is pretty easy to become immersed in the virtual world that Cline creates - I read through the book pretty quickly.

In addition to the fun of the plot itself, I thought the social commentary was well done. The book wasn’t particularly preachy, but it did gently bring to light some of the troubling trends of our own times, which in the book become even more pathological. One, of course, is growing economic inequality. When you combine this with the lure of affordable virtual reality, it is no wonder most people want to escape their crappy lives and live in a world where things are better and more equal - and meritocratic within the rules of the game. It is, at least, less destructive than drugs and booze. But, as it does for Wade, it becomes his entire life. After his early success, product endorsement money enables him to create his own fortress where he need have no actual interaction with other humans. His eventual liberation therefore requires that he set foot outside of virtual reality and experience real life.

The part about the nefarious corporation seeking to monetize everything was all too realistic. (Hello Facebook and Google...lately particularly?) Also too close for comfort was the idea of slavery as a result of debt. We are not that far removed from the days of debtors’ prison. Or from the days when half the population teetered on the brink of starvation, and lived literally decades shorter lives than the wealthy. It is the natural result of treating human beings as expendable cogs in the machine - and valuing them according to the money they bring.

Ready Player One isn’t a perfect book, but it exceeded expectations. I’m glad I was given a reason to read it.

Posted by Diary of an Autodidact at 7:34 PM