I have to confess, there is something that makes me very sad about writing this post. To wit: I have now read all of Mary Roach’s books, and there are no more to read. I can only hope that Grunt, published in 2016, isn’t the last one she writes.

I first came to love Mary Roach via Bonk, her extremely irreverent look at the dark corners of copulation - as part of her research, she had a live MRI of her and her husband, um, in flagrante delicto, taken. Okay, so it was also part of a legitimate research project - which she of course volunteered for because that is what she does. It kind of made some waves, and I read about it somewhere, and decided to read the book. At that point, I read it on the sly, because I was embarrassed to tell anyone other than my wife about it. (I didn’t blog about it at the time for that reason.) Now, of course, having given sex ed to my five kids, and having essentially been evicted from our former church for political reasons, I would totally review the book in all its glory.

What did happen, though, is that I got a taste of Roach’s writing, and proceeded to read Gulp (about the digestive system), Spook (about paranormal research), Packing for Mars (about the gross parts of the space program), and Grunt (about the military.) In all of these books, Roach essentially finds the weirdest, craziest, creepiest, and darkly humorous things about her topic. Or, you might say, she pokes a broom under the dressers and in the corners to see what runs out. 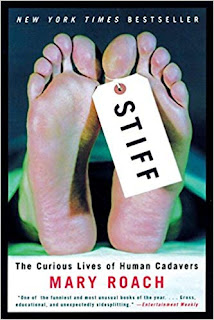 Stiff is Roach’s first book, written after years as a writer for Salon, New York Times Magazine, Outdoors, and Vogue among others. In some ways, it is her least irreverent. On the one hand, it might be because she didn’t feel as comfortable in her most snarky voice until she had a successful bestseller. On the other, perhaps the very topic of human cadavers inspired a certain respectfulness - and that is probably the best explanation. It is a sensitive topic, which Roach deals with...well, like Mary Roach would deal with such a topic. By finding all kinds of gross, fascinating, and disturbing, yet scientifically legitimate (for the most part) approaches to dead bodies. So, for example, while the 19th Century experiments in crucifixion seem more lurid than scientific in our time, they were treated very seriously back then. But there is a lot more than that. Roach starts with the way that cadavers are used for medical training, and ends with modern approaches to more environmentally friendly disposal techniques. Along the way, she looks at cadaver stealing, crash test research, organ donation, military research, and head transplants, to name a few.

This book, obviously, isn’t for the faint of stomach. Roach is nearly impervious to squeamishness. But she certainly is an entertaining, enlightening, and downright funny writer.

Posted by Diary of an Autodidact at 8:45 PM