Source of book: We own this.

I think this is the first time I have blogged about a graphic, well, not novel, because it is more of an autobiographical non-fiction work. Neither does “comic” work, because it is rather unfunny. Tragic is the word which comes to mind.

Persepolis is the first in a two part series wherein Marjane Satrapi tells the story of her life from childhood to adulthood in a comic-book format. Satrapi lived through the Islamic Revolution in Iran, before immigrating to Europe. 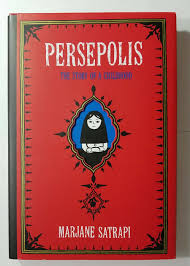 Young Marji is a child when the events of the Revolution take place. She is born into an upper class, educated, Iranian family. As she comes of age, she has to wrestle with her privilege and her future. This installment ends when she is sent to Austria to study after she has a series of run-ins with her Islamicist teachers.

Satrapi intended the book in part to reveal a side of history which we Westerners don’t tend to see. We get fed a politically convenient narrative that isn’t always rooted in reality, and this leads to many misunderstandings. Our ignorance also feeds into the xenophobic and Islamophobic propaganda that the Right in the United States uses to justify endless war. (More about that later.)

Because Marji’s family has a long history of political involvement, she is able to reveal the history behind the history, so to speak. The Islamic Revolution was a reaction against the Shaw, who, as lionized as he has often been by the West, was hardly admirable. The great tragedy of Iran is that it had a long history of stability and culture, and was well on its way to being a modern, educated country, with a belief in human rights, and a thriving economy. Sadly, a combination of European interference (in pursuit of oil), combined with battles for power and increasing oppression to retain said power, eventually led to the repressive Fundamentalist religious dictatorship that exists today.

One of the things that really struck me reading this book is that there wasn’t some change to Islam from something else. Iran was a majority-Islam country for many centuries. Rather, revolutionaries used religion (specifically fundamentalist religion) as a weapon, along with war, to justify totalitarianism. The war, of course, was the war with Iraq, which was fed by the great world powers, including the United States and the USSR, and served as both a proxy war for those countries, and as a way for both Saddam and the Iranian mullahs to tighten their grip on power.

(For how this works, I recommend Ursula Le Guin’s book, The Left Hand of Darkness.)

All the religious fanaticism, the head coverings, the repression of women, and so on, came not so much from sincere belief, but in the way that such things allowed for social control. There are so many parallels to the Religious Right in America that it is rather spooky.

While Marji’s family survives the Revolution, she loses a friend to a bombing, and acts out in ways dangerous to her safety in a fundamentalist society. Thus, at the end of the book, she is sent to live in Austria.

Persepolis was originally published in French. Satrapi was educated at the French school in Iran, so she grew up fluent in that language. In Austria, she had to learn German, but French remained her primary European language. This book was translated into English by Mattias Ripa.

Satrapi’s drawings are evocative and haunting. She chose to draw in pure black and white, no greyscale except as suggested by line shading. It is a spare, raw style, but despite its simplicity, it is surprisingly emotional. Details are left intentionally vague, except for the faces, which are cartoonish, but marvelously expressive. In fact, after I finished the book, I wasn’t sure how good the writing was (although it certainly wasn’t poor), but I could see the faces of the characters - particularly Marji - in my head so clearly. That’s good art.

There are a couple of lines that I have to mention. One is when the fundamentalist principal of the new Islamic girls’ school comes unglued because the girls (who grew up in secular schools) are irreverent about the religious and “patriotic” stuff. The parents are called in, and they push back too. They don’t desire that the girls be covered from head to foot, or be forbidden to play as they did. The best part, however, is when Marji’s dad tells the (female) principal, “If hair is as stimulating as you say, then you need to shave your moustache!” Yes, he actually said that.

The second one is not funny at all. During the war, children were recruited to serve as soldiers. As a cousin in the army tells Marji’s family, “They come from poor areas, you can tell...first they convince them that the afterlife is even better than Disneyland, then they put them in a trance with all their songs...It’s nuts! They hypnotize them and just toss them into battle. Absolute carnage.” This is what ideology and lust for power do. They feed on their own children.

My wife found a used hardback of this book, and both of my teen daughters read it first and recommended that I read it. Because of its occasionally graphic violence and coarse language, it has been one of the most often challenged books. I think it is fine for teens, however. I also suspect that it might be challenged because it is too nuanced for the taste of some. It isn’t particularly flattering to the US and Europe - their interference and colonialist oil grabs caused many of the problems - something we are often unwilling to admit. And the book isn’t really for or against Islam, although it doesn’t paint fundamentalists in a good light. Or the Shaw for that matter. It also is ambivalent about revolutions in general.

It is definitely an interesting book, and I look forward to reading the second book as well.

Posted by Diary of an Autodidact at 5:57 PM