Source of book: Audiobook my wife found at a library sale

My kids have been a fan of Alexander McCall Smith for quite a few years now, after my wife introduced them to the Mma. Ramotswe series. McCall Smith (that’s his full surname) is a prolific writer, but seems to hit a note of thoughtfulness and nuance with most of his books, despite writing several each year. He has at least three series going right now, in addition to the stand-alone novels. 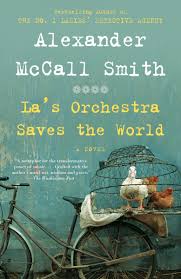 This book is one of the later, a novel unrelated to anything else he wrote. It is set mostly in the years of World War Two, in rural England.

The title character, La (short for Lavender), is a young British woman who ends up playing a rather unremarkable role in the war effort. We meet her first in a retrospective by her stepsons, who visit her cottage in Suffolk, where most of the events take place. She is still known, years after her death, for her orchestra.

The book then shifts to La’s earlier years. She went to Cambridge (attending an all-girls college), made a disastrous marriage which ends when his mistress in France comes to light, and is gifted the cottage and an income by her former in-laws (who are embarrassed by their son.) He dies soon after, leaving her with a significant fortune. When the war starts, she searches for some volunteer work. However, as she is older and widowed, intellectually stimulating jobs are unavailable, and she ends up tending chickens in the neighborhood near her cottage. After meeting the commander at the local air base, he and she decided to found a village orchestra - to include service members looking for a diversion. Her orchestra plays through the end of the war, disbanding afterward. They briefly re-form during the Cuban Missile Crisis, causing someone to quip that they have saved the world twice.

The other main character is Felix, an ostensibly Polish airman, who joins the RAF after the fall of Poland. In reality, he has a more complex history, being the child of German parents, although he was raised in Poland from age eight onward. La and Felix have serious chemistry, but his reserve and her loyalty to country prevent them from sharing their feelings. It is hinted in the prologue that they connect years after the war, after he has had children and a failed marriage of his own.

McCall Smith has a long history with music. He founded the “Really Terrible Orchestra,” a group of enthusiastic amateurs who make music for the joy of it (and the entertainment of the audience, I am given to understand.) He plays contrabassoon, which may well say something about his personality. He also established an opera house and training center in Botswana, a country that he spent a number of years in, teaching law.

This book is all about McCall Smith’s belief in the healing power of music. I must agree. One of the things about making classical music professionally is that you connect with people from around the world. Even our little hometown orchestra has had players from around the world join us - and that is even before you get to the soloists. I have shared stands with violinists from Russia, the Ukraine, Iran, Romania, Japan, Cypress, and Spain over the years (if memory serves), and that’s just the ones I have had the chance to sit with. Music is a universal language, and it is difficult to see someone as “the enemy” after you have bonded over a Mozart opera, or a Beethoven symphony.

McCall Smith is also correct that what we fight to preserve (in a just war) isn’t merely our home or our tribe. We fight to preserve all that is transcendent and good in the world. To reduce ourselves to the idea of “kill the other people” is to lose the war, to become as vicious and animalistic as the Nazis, or any other genocidal nationalist movement. One of my Symphony colleagues had a bumper sticker: “Less Violence, More Violins.” I couldn’t agree more. (Although even as a violinist, I’d be happy with a few winds, brass, and percussion too.) Music - and the arts generally - represent our aspiration to transcend, to find common ground and meaning with the rest of humanity, and to put our energy and creativity toward beauty, rather than hate.

In general, I thought that La’s Orchestra Saves the World lacked the depth of character that you find in some of his other books - but that might be in part because it is a single book, and you don’t get to see characters unfold across a range of plots and circumstances. The book does showcase McCall Smith’s usual ethical nuances and dilemmas. Is it right to marry someone who you don’t exactly love? How should one respond to betrayal? Should you turn someone in, even if you love them, if you think they might be a spy? What if they turn out to be innocent, but suffer anyway? How do you deal with bigoted neighbors? This is McCall Smith’s best trait, is in his acknowledgement of nuance, and his gentle and non-judgmental probing of the shades of grey.

Posted by Diary of an Autodidact at 8:48 PM