An American Plague by Jim Murphy

Source of book: Audiobook from the library.

This book is part of our not-particularly-systematic exploration of Newbery award winners and runners up. This book was an honor selection back in 2004. 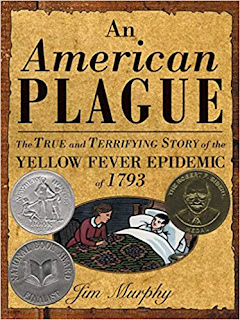 This is the fairly rare award winning children’s book which is non-fiction. It tells of what has to be one of the most obscure events of the early United States - and one which remains relevant today.

It is all too easy to think of history as a series of major events involving (mostly) male characters doing serious stuff like war and government and things like that. It is less easy to imagine how real, ordinary life happened, and how seemingly mundane events could be so terrifying as to cause a constitutional crisis and threaten to bring down the government itself.

Most likely, a merchant ship entered Philadelphia (then the capital of the US and the most populous US city), bringing a few mosquitoes infected with a little virus. The unsanitary conditions combined with perfect weather to cause a serious epidemic of yellow fever, killing thousands, and paralyzing the government. This book tells that story.

First, let me mention that this is technically a book for children - late elementary to junior high. In an odd way, it is therefore less terrifying to kids of that age than it is to adults. While Murphy doesn’t pull punches - the horror and pain of the disease and the tragic deaths are in plain view - it is we adults who truly feel the helplessness of seeing spouses, children, and friends struck down to the grave in a few days. Man, I am glad we don’t live in those days.

I must say, I loved pretty much everything about this book. First, it is scientifically accurate - something you can’t take for granted in these days of partisan denialism. Murphy even gives an extended epilogue explaining the existence of a vaccine - and the limited supplies we have - and the risks of a future outbreak. Thus, the book is both comforting (we know how to prevent yellow fever) and terrifying (we are grossly unprepared should a future outbreak - perhaps aided by climate change - occur in the temperate zone.)

One other thing that was superb about this book was that the author spent a good bit of time on the role of the free blacks in this epidemic. To summarize: in the early days of the outbreak, it was (erroneously) believed that blacks were immune to yellow fever. (Some recent arrivals from Africa were.) Thus, free African Americans volunteered to serve as nurses for the ill. It was a pre-existing society of “free blacks” who stepped up to help, and indeed, did the overwhelming majority of nursing care during the epidemic.

Sadly, they were thrown under the bus afterward, being blamed for price gouging (in reality caused by rich whites competing for scarce services) and theft - which was actually more common by white nurses. To his credit, Murphy spent a full chapter on this issue, quoting extensively the primary sources. While this part of the book might not be the most riveting for kids, it is rather fascinating for us adults, who tend to understand the role of systemic racism in the lies spread afterward to discredit the African American nurses, who were the true heroes of the epidemic.

I should mention some historical figures here, which are particularly fascinating. First is Dr. Benjamin Rush, one of the signers of the Declaration of Independence, and a major figure of the times. On the negative side, he was rather completely wrong about yellow fever, and his “treatment” probably killed more than it cured. On the other hand, he was thoroughly admirable in that he selflessly treated and cared for the sick throughout the epidemic, despite suffering from the fever himself - including a relapse that nearly killed him. So, as a scientist, he failed. But as a human being, he was a badass. And, in retrospect, his extensive documentation of the plague assisted others in eventually coming to the correct scientific conclusions about yellow fever.

I also need to mention Matthew Clarkson, the mayor of Philadelphia, who stayed even after most of the government abandoned the city. He had to make some hard decisions, and essentially take control of a system for the common good, even though his powers were questionable. He didn’t have much obvious power, but after those who did fled for their cushy rural estates, there wasn’t any other option for doing the necessary things: cleaning up the filth, draining mosquito breeding areas, burying the dead, and so on. The thing is, even though he (arguably) seized powers he didn’t have, as soon as the others came back and did their job, he willingly ceded power. That is the sign of a true statesman, not a despot. He took on personal risk, yet declined the reward. One of the true heroes of the time.

Just a few others to mention: over a century later, it would be Josiah Nott, Carlos Finlay, and Walter Reed and others who worked tirelessly to prove that yellow fever was transmitted by mosquitoes (the second deadliest animal - behind humans) which transmitted the disease.

This book is well researched, well written, and a great resource on the history of a nasty, deadly disease, which had serious implications, political as well as epidemiological, for centuries.

Oh, and about those politics: in response to some, um, shenanigans in English history, our constitution didn’t really provide for the assembly of Congress outside of the national capitol. So, what would happen if Congress fled from the capitol (then Philadelphia)? President George Washington was in a bind: he wanted to call Congress together to address the epidemic (and other national issues), but the members had fled the plague and could not easily be brought to session. Could the president order assembly elsewhere? (The answer turned out to be “no.”) What was to be done?

Eventually, laws were passed as a result, which specified what would happen when Congress abandoned the capitol because of a natural disaster or other catastrophe. While this law hasn’t been used much since, it will likely come into play should a terrorist attack render Washington DC unavailable for a session of Congress. As a lawyer, I find this fascinating. And, perhaps (although I hope not) relevant in the future.

This is a good book to read with the kids - history is so very important to our understanding of the present. I think the reality of the way in which human decency (on the part of the free blacks) runs up against hatred and white supremacy (as it sure as hell does today) is crucial to understanding our current toxic right wing politics. Furthermore, disease will always be with us, and it is helpful to understand the factors which combined to make an epidemic.

Posted by Diary of an Autodidact at 7:51 AM