Why Young People Are Leaving Evangelicalism

This article from fivethirtyeight.com, Nate Silver’s website, was brought to my attention by a friend a year ago. I have contemplated it ever since, and wanted to write a brief response. I decided to post this on what is roughly the second anniversary of our leaving organized religion.

Are White Evangelicals Sacrificing the Future In Search of the Past?

My answer is “Hell yes!” It is the Evangelical idolatry of the past that is a primary factor in alienating the younger generations. The article, however, gives only part of the picture. 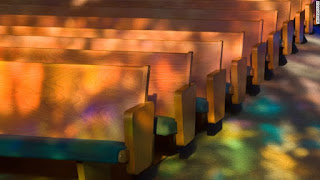 The handwriting is on the wall, so to speak. The survey cited in this article is from 2016, and it therefore misses the “Trump Effect,” which I believe will cause a greatly increased flight of the young from Evangelicalism. In fact, my family, and a number of others I know have already left, and will not be returning.

Two things the article does get correct is that 1. The infatuation with the (imaginary) past is a huge factor and 2. Belief incompatibility is an issue. However, the issue of sexuality, important as it is, is about to get overwhelmed by three greater problems.

White Evangelicals, 80% of you voted for a man who ran on the 1920s Ku Klux Klan platform. In Alabama, 80% of y’all voted for a man who told an African American man to his face that America was last great when we had slavery, that all Constitutional Amendments after the Bill of Rights should be repealed, (that includes the ones ending slavery, giving non-whites equal protection under the law, giving non-whites the right to vote, giving women the right to vote, and abolishing poll taxes) and said that the Civil Rights Act of 1964 and Voting Rights Act were America’s biggest mistakes. (Those are the laws that ended Jim Crow, and made the right to vote federally enforceable.) There is a literal Nazi running for office in Illinois, and I will bet good money 80% of White Evangelicals will vote for him. Steve King, an open white supremacist got reelected in Iowa, with white Evangelicals as his core constituency. In fact, right now, white Evangelicalism’s political commitments - that means parties, candidates, and yes, policies - are indistinguishable from those of the Ku Klux Klan. Young people can see this. Oh, and 70% of you believe we have no duty to take in refugees. This is far and away the highest percentage for ANY religion (or lack thereof) in America. The last year has really driven this home, with all too many white Evangelicals in my life grossly slandering immigrants, and calling for harsh policies to exclude and harass them.

80% of White Evangelicals voted for two known sexual predators. As Rachael Denhollander testified in the prosecution of predatory doctor Larry Nassar, the Church is the least safe place for victims of sexual assault, because the church blames victims, and protects the powerful men who prey on children. The same is true for domestic violence - the Evangelical Church is not a safe place for victims, because it prioritizes a hierarchy of men over women. Finally, young people are growing up in a world where the only place that women are systematically barred from leadership is in the church. This has not escaped their notice.

White Evangelicals have strong opinions about politics, and those opinions are a carbon copy of Fox News. In addition to the open racism (see above), the way that they talk about and act toward those outside their tribe (racial, political, and definitely economic) is based on the Social Darwinist teachings of atheist Ayn Rand, and bear literally zero resemblance to the teachings of Christ, the words of the apostles and prophets, or the Torah. It is a worship of money and power, and the blaming of the poor and oppressed for their own oppression. Again, young people can see this. And if Christ is nowhere to be found in our politics, why even bother.

And yet, somehow, the older white Evangelicals I know keep hand-wringing that the kids don’t believe them about sexuality. Take a look in the mirror. It isn’t a mystery.

I do not want to minimize the effect that Evangelicalism’s ill-advised jihad against LGBTQ people has had.

An article from NPR recently pointed out, an important reason why younger people are rejecting the political nature of Evangelicalism is a real doozy: “Younger evangelicals are also more likely [than older evangelicals] to have relationships with people of other ethnic backgrounds.” EXACTLY! It’s a lot harder to vote for racist politics if you actually know people outside your race.

And likewise, when it comes to LGBTQ people, the young folks are much more likely than the older to have known LGBTQ people their entire lives. In a shocking development, it turns out that actually knowing people different from you can lead to empathy for them. Who knew?

The reason why Evangelicalism is losing so badly on issues of sexuality with the younger generations is two-fold:

First, most of what they have told us about sex, gender, and sexuality (and yes, that includes abortion) is political propaganda at best, and outright falsehood at worst. If you lie often enough, people will realize you lie, and stop believing you. And if you keep insisting on “truths” that do not match people’s experience of the world, then you will lose them.

Second, Evangelicalism offers no solutions that would actually help people. (In the case of abortion, honestly, their other political commitments would increase abortions.) Rather, they offer condemnation, discrimination, and eventually, criminalization.

Both of the above are also problems that touch on race, gender, and class - those three issues I believe will be the leading reasons young people leave Evangelicalism. The handwriting is on the wall…

If you are trying to convince younger people that your policies on LGBTQ rights and abortion criminalization aren’t driven by the same nostalgia for the past and outright bigotry as racism and misogyny, then perhaps you shouldn’t embrace…open racism and misogyny. Just saying.

Some updated numbers - only 10% of under-30s are white evangelicals.

Full survey from 2017. The handwriting is on the wall.

Numbers from Pew Research for 2018-2019. There has been a dramatic dropoff in the last ten years. Gee, I wonder why?

Pavlovitz nails it again. Richard Dawkins, Sam Harris, and the late Christopher Hitchens can only DREAM of making as powerful an argument in favor of atheism as white American Evangelicals have made the last few years.

Excellent editorial article from Huffington Post that I could have written myself - it so matches my feelings and experience.

Posted by Diary of an Autodidact at 11:23 AM