Source of book: Audiobook borrowed from my brother.

This book is the third Diskworld novel, and the first in the “Witches” series. We have previously experienced the first three in the “Rincewind” series, and the first four in the “Tiffany Aching” series. The less said about the abridged edition of Guards, Guards, the better. If you want to read my thoughts on the other Terry Pratchett books we have read, here is the list:

The Colour of Magic
The Light Fantastic
Sourcery

Guards! Guards! (Stupid abridged edition, which is an abomination.) 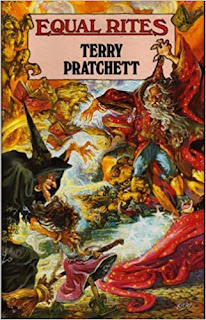 Equal Rites features a character, Eskarina Smith, who disappears from the series until reappearing as a rather unearthly character in I Shall Wear Midnight. I’m not sure quite why, but it is what it is. It does seem, however, that Tiffany Aching is in some ways what Eskarina might have become as she grew older.

Eskarina is an anomaly in the Diskworld: a female wizard. In the Diskworld universe, the number eight has magical properties. And, by the laws of magic, the eighth son of an eighth son will be a wizard. An elderly wizard named Drum Billet knows he is approaching death. (Like witches, most wizards know when they will die.) He finds what he believes to be the eighth son of an eight son, and passes his powers to the infant, leaving his staff behind. The only problem is, he forgot to check the sex of the baby, and the he turns out to be a she.

As she grows, Eskarina turns out to have wizard magic she cannot control, and this concerns the local witch, Granny Weatherwax (who would become a recurring character.) Granny decides to take Eskarina to Unseen University (where the wizards are trained), to learn how to use her powers. The journey takes up a good bit of the book - and it is obvious that an 8 year old girl with an attitude and unpredictable magical powers will be a tough assignment for Granny, who hasn’t left the village much before. Eventually, the story takes a turn to the Dungeon Dimensions, where Eskarina and a young wizard, Simon, have to figure out how to get back to the “real” world. I won’t spoil it more than that.

One of the things that struck me about this book is just how much Granny Weatherwax changes in the 20ish years between this book and The Wee Free Men. In this book, she is a rather ordinary village witch. She is wise, but illiterate and very provincial. She lacks the confidence and calm of the later books. Oddly, she also seems...older somehow. Clearly, she expands as a character as the series goes on, eventually becoming the unofficial head witch, with experience and knowledge extending far beyond her village. Perhaps this epic trip to Ankh-Morpork is the beginning of the expansion of her world and the start of her personal growth. It remains to be seen, I guess.

This audiobook was different from all the others we have listened to in that it has a female narrator: Celia Imrie. I had no idea who she is, but apparently she was a regular on British television and stage. Whatever the case, I thought she did a fine job. Considering the delightful Nigel Planer and Stephen Briggs are the gold standard for Pratchett, this was a tough gig. Particularly good, in my opinion, was the way she voiced the various wizards. They were different from each other, but shared a certain reedy stuffiness which was quite fine. She also gave Granny Weatherwax a more stereotypical witch voice than Briggs does in the later books - but the books themselves dictate a different tone. It was definitely an interesting set of choices that I thought was well done.

(On a not entirely unrelated note: Yes, this was the unabridged version of the book. I checked. Don’t settle for less.)

There are so many fabulous quotes in this book. I’ll share just a few.

‘If a thing’s worth doing, it’s worth doing badly,’ said Granny, fleeing into aphorisms, the last refuge of an adult under siege.

That one made me laugh out loud. It is way too true, and my kids presumably know it.

‘They say a little knowledge is a dangerous thing, but it is not one half so bad as a lot of ignorance.’

One of my all-time favorite Pratchett quotes. It has been discouraging to see knowledge and expertise so disrespected in our times.

As I noted, Granny Weatherwax is fairly inexperienced in things outside of her village in this book. Here is one exchange that shows the typical Pratchett turn of phrase.

‘You said there was some sort of teaching place?’ he hazarded.
‘The Unseen University, yes. It’s for training wizards.’
‘And you know where it is?’
‘Yes,’ lied Granny, whose grasp of geography was slightly worse than her knowledge of subatomic physics.

Likewise, while she can read and (sort of) write, she limits herself to the Almanac, rather than books. Until later in the story at least.

For the first time in her life Granny wondered whether there might be something important in all these books people were setting such store by these days, although she was opposed to books on strict moral grounds, since she had heard that many of them were written by dead people and therefore it stood to reason reading them would be as bad as necromancy.

And then, there is this scene where Esk wanders into a disreputable pub:

The landlord, whose name was Skiller, found himself looking directly down at a small child who seemed to be squinting.
‘What?’ he said.
‘Milk,’ said the child, still focusing furiously.  ‘You get it out of goats.  You know?’
Skiller sold only beer, which his customers claimed he got out of cats.

Or this gem, which is all too true, particularly here in California where people pay to get tans despite the fact that we have an abundance of sunshine.

He had the kind of real deep tan that rich people spend ages trying to achieve with expensive holidays and bits of tinfoil, when really all you need to do to obtain one is work your arse off in the open air every day.

Pratchett, even in his early work, is clearly a feminist. There are zingers throughout this book about the Patriarchy and those who support it.

If you were a boy I’d say are you going to seek your fortune?’
‘Can’t girls seek their fortune?’
‘I think they’re supposed to seek a boy with a fortune.’

Social commentary abounds, as in this depiction of the tribes which dominate the river trade, and have designated persons to do their negotiating.

Zoon tribes are very proud of their Liars. Other races get very annoyed about all this.  They feel that the Zoon ought to have adopted more suitable titles, like ‘diplomat’ or ‘public relations officer’.  They feel they are poking fun at the whole thing.

Religion doesn’t escape Pratchett’s teasing either, although he wasn’t completely hostile to it. Having had a bit too much experience with toxic and hateful religion myself, I think he is right about this one:

[G]ods were always demanding that their followers acted other than according to their true natures, and the human fallout this caused made plenty of work for witches.

And one final one, which I really wish I had thought of.

It is well known that stone can think, because the whole of electronics is based on that fact...

I am, of quartz, writing this on my computer, which is indeed a quite gneiss example...sorry. Couldn’t resist.

Equal Rites isn’t quite as funny as the Rincewind books, or as philosophically deep as Pratchett’s later books. However, still very enjoyable both as a story and as social commentary.

Posted by Diary of an Autodidact at 5:42 PM