Source of book: Audiobook I own

I try to read at least one book by P. G. Wodehouse each year - and at that rate, I will likely die before I finish all of them. Dude was prolific and lived a long life. Anyway, here are the ones I have written about on the blog:

Uncle Fred in the Springtime

The Adventures of Sally

Love Among the Chickens

Jeeves And The Mating Season

Aunts Aren’t Gentlemen (aka The Cat-Nappers) 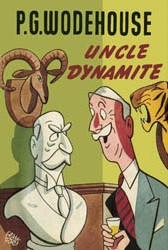 Uncle Dynamite is a book featuring Frederick Altamont Cornwallis Twistleton, fifth Earl of Ickenham, otherwise known as Uncle Fred. For those unfamiliar with him, Uncle Fred is old of body, but juvenile of heart, always spreading what he calls “sweetness and light,” by means of crazy schemes and insane adventures. His particular victim is usually his nephew, the hapless “Pongo” Twistleton. I have written about two previous Uncle Fred stories: Uncle Fred in the Springtime, which is also a Lord Emsworth story; and Cocktail Time.

As in the case of the latter, Uncle Dynamite is filled with literary references. Rather than Alice in Wonderland, this one is filled with Shakespeare references, usually in far less serious situations than in the original, which is part of the humor.

Trying to summarize a Wodehouse plot is a bit like drawing a complicated flowchart or corporate organization. There are so many threads and complications that it can get confusing. Let me at least try to bring some order to the chaos of this book.

Uncle Fred meets Bill Oakshot on the train. It turns out that they are neighbors. Bill is just returning from abroad, and is friends with Pongo. Bill also is the actual owner of Ashenden Manor, which is occupied by Bill’s uncle Aylmer Bostock, an overbearing and bombastic “dishpot,” as his maid describes him. Bill is in love with Hermione Bostock, who is engaged to Pongo, who is really still in love with Sally, an American girl who kind of resembles the other Sally from The Adventures of Sally, but is a different character.

Pongo comes to Ashenden to meet the parents of his fiancee, and things go badly. Aylmer has a dreadfully tacky collection of African curios, and Pongo accidentally breaks one. And then, a bust as well. So Pongo substitutes a bust from Uncle Fred’s house (which is nearby), not knowing that it was made by Sally for purposes of smuggling jewels back to America without paying customs.

In the meantime, Aylmer is suing Sally’s publisher brother Otis, so Sally wants Pongo to convince Aylmer to drop the suit. Oh, and the vicar has smallpox, so someone has to fill in and judge the “Bonny Baby” contest.

Uncle Fred to the rescue. I’m not sure “rescue” is the best word here, however. Uncle Fred pretends to be expedition leader Major Brabazon-Plank, and has Bill invite him to Ashenden. Uncle Fred will then agree to judge the babies, steal back the bust, and set everything right.

But there is more! Pongo is accused by a local policeman (also the fiance of the maid, Elsie Bean) of being an imposter. The real Major Plank shows up and is outraged at being impersonated. Hermione and Pongo quarrel, freeing everyone up to marry the “right” person, and Otis manages to sign Hermione to a book contract. Whew! And there is more, because things get a LOT more complicated before they sort themselves out.

Through it all, Uncle Fred maintains his confidence and serenity, even as everyone else flips out. There is always a way through for Uncle Fred, and things always work out just fine in the end.

As usual, there are a bunch of hilarious lines. In this book, many of them involve the fusty copper, Harold Potter. In this case, Sally has (for reasons) pushed him into the duck pond.

"I was assaulted by the duck pond."

"By the duck pond?" Sir Aylmer asked, his eyes widening.

"How the devil can you be assaulted by a duck pond?"

Constable Potter saw where the misunderstanding had arisen. The English language is full of these pitfalls.

Or his tendency to use silly pseudo-legal phrasing:

A sticky moisture had begun to bedew his brow, as if he had entered the hot room of some Turkish bath of the soul.

It is all in good fun, and the stakes are, broadly speaking, pretty low. That’s Wodehouse. He doesn’t address the deep issues of his time, but instead pokes fun of human nature in the most ludicrous manner possible. Ultimately, the characters who, like Uncle Fred, are able to laugh at themselves, are the ones who prevail. And the others? Well, they get their just deserts, which is usually to be made ridiculous.

This audiobook was read by the late great Jonathan Cecil, who is my favorite Wodehouse reader. And that’s saying something, because Martin Jarvis is also superb. You can’t go wrong with either. What I like best about Cecil is his amazing ability to create distinct voices which are so consistent throughout that you can tell who is speaking simply from the voice. Wodehouse often contains slam-bang dialogue, and it really helps to know who is speaking at any given time. With Cecil, it is so very clear that you forget you are listening to a single person. From the suavity of Uncle Fred, to the timorousness of Pongo, to the bombast of Aylmer, to the basso profundo of Hermione - it’s delightful.

Posted by Diary of an Autodidact at 3:07 PM