With theater venues closed due to Covid-19, our local thespians have had to be creative in order to keep making art. One of those creative ideas is this one.

I first experienced Sarah Ruhl in her lovely adaptation of Chekhov’s Three Sisters, which used delightfully idiomatic language for a play which can often be stilted in more literalist translations. Seeing her name on one of her own plays, produced by one of our local institutions, therefore, I figured it was worth checking out. Even better was that the three actors were all ones I had enjoyed in the past, and the play was about Elizabeth Bishop, one of my favorite poets.

Dear Elizabeth is based on the 30-year friendship between poets Robert Lowell and Elizabeth Bishop. They corresponded regularly, and left behind a rich trove of hundreds of brilliantly written letters. Ruhl combines the text of the letters, a couple of poems from each, and a minimalist narration of stage directions to tie it together. The play is perfect for the times, as the actors can act together, but at a distance.

Bishop and Lowell had a fascinating relationship. As is apparent from their letters, there was a high degree of emotional intimacy, one that transcended that of their respective romantic relationships. The letters are often about professional stuff - they both won Pulitzers for their poetry, and critiqued each other’s works - but there are plenty of passages that get deep into personal issues and concerns.

Both poets were complicated individuals, with flaws and struggles. Bishop fought alcoholism much of her life. Her great romance was with Lota Soares, a Brazilian architect she lived with for fifteen years. When Bishop returned to the United States as her inheritance ran out, Lota despaired and committed suicide. Lowell suffered from bipolar disorder, and was in and out of mental hospitals throughout his life. He was married three times, and his breakups were pretty harsh. All of this is worked out in their correspondence as well, although often by inside language and implication.

What I was not prepared for entirely was that it appears Lowell proposed to Bishop after his first marriage failed. Bishop, of course, declined - she wasn’t into men that way, after all. Yet, she still experienced a certain jealousy over his marriages, particularly the last, when he married a much younger woman he had impregnated.

The most emotional moment in the play, however, was Bishop’s critique of Lowell’s poetry collection, Dolphin, in which he used (yet altered) private letters from his second ex-wife. Both Bishop and Adrienne Rich castigated Lowell for this - Rich cut off her friendship with him, in fact. Bishop’s letters to him were strong and angry, and this came out in the play very well.

All three actors were good in their roles. Julie Gaines, as Bishop, was particularly striking. I have loved her in every role I have seen her in. Steve Evans brought his usual folksy and good-natured vibe to the role of Lowell. Jan Hefner had just a small part as narrator, but played it with admirable transparency, so it didn’t feel intrusive. 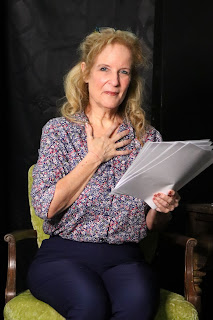 The play apparently is intended to be performed without rehearsal, for a spontaneous feel. I believe this production was rehearsed, but it still had the feeling of real-time thought. There were a few stutters and such that felt natural. My only quibble was with the sound mixing, which wasn’t particularly balanced. Fortunately, everyone could be heard, but the narrator was louder than the others. It is a challenge to put something like this together, particularly if you don’t have a large videography budget, so I am not complaining loudly about this. (I’ll be writing about some other productions later, and technology issues are not unique to small theater groups with low budgets either…) 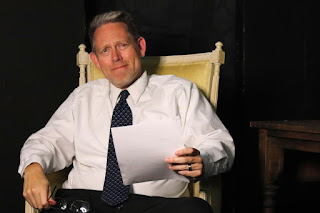 In any event, it is good to see our local thespians keeping things going as best they can in hard times. I will be supporting them, and encourage everyone who can to support these small, local businesses of all sorts that make a community a community. 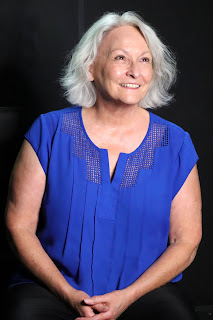 Jan Hefner
Posted by Diary of an Autodidact at 10:31 AM