The Early Poems of Yvor Winters

Yvor Winters is often better known these days as a literary critic - and an idiosyncratic and cranky one at that. It is true that his taste was a bit different than the mainstream, particularly as to which poets from the last 400 years belonged in the canon, and which greats were overrated. That said, his criticism is certainly interesting and insightful, even if I do disagree with a number of his positions. 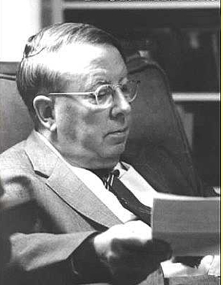 As a poet, he isn’t as well known, which is a shame. At a library sale last year, there were a number of Library of America American Poets Project hardbacks for sale, and I snapped up a number of them, including one of Yvor Winters, edited by Thom Gunn. I decided to give it a chance, and rather enjoyed the ones I read. (With a few exceptions - there are a couple of wince worthy racial terms of the era, shall we say…)

Winters’ poetry can be divided into two periods. In his early period, the poems are modernist, with influence from imagism and Native American styles. He later switched to a much more formalist poetry. I read a selection of the earlier poems in this case.

I am a bit odd in my tastes in that I enjoy both formal and modernist poetry. I can’t really say I dislike either, as long as well written. In any event, I enjoyed these poems, and look forward to reading the more formal later poems in the future.

Many of these early poems are in cycles of related ideas, and are best read as part of the whole. However, quoting them in full would take too much space and would probably violate copyright laws on the later ones. My hope is that if I share my favorite parts, readers will seek out the entire works and read them.

I particularly love the images that Winters creates. Like many of my favorite poets, he has a knack for bringing nature to light, and painting a picture that lasts in the memory.

Here are the ones that stood out to me:

It’s a compact gem, and one I love.

The Magpie’s Shadow is a set of very short verses, in a form Winters invented. Each is a six-syllable line, even more compact than a haiku, and intended to be minimalist imagist verses. They are grouped by the seasons, and each has a brief title. Here is one example:

The sequence follows an arc, spanning four pages, and is delightful read end to end.

The next sequence is The Bare Hills, the largest in the collection, spanning in excess of 35 pages. It rambles and has a number of recurring ideas and pictures. There is much to like in this sequence, and it cumulatively tells a journey through an emotional landscape set in a physical place. The headings are kind of odd, because of the sections and subsections. A legal writer would be proud, but it is a bit odd for poetry. Ultimately, I didn’t find them helpful and just read it. Here are my favorites.

II. The Precincts of February

Alone in the sun,

Came up the valley,

Rooted deep in the land.

Trod by the bird

For day on day.

In this one, I found the way the stanzas are split to add to a feeling of gradual revealing of the scene and its meaning. The lines also change length in an interesting way.

And in the moonlight

I wait for winter.

That it hides nothing.

That last stanza is fantastic, and is probably my favorite in the collection. I know that kind of silence, both good and bad.

I am a birder, so I enjoyed the mentions of birds, which show that Winters is observant of their habits. Here are a couple.

whirls down upon me finer than geometry

and at my very

and folded by cold life itself for limbs so definite

about their feet the clustered

The dogs swim close to earth

dazed and rolled amid the sudden blur of sleep

above the dayglare of the fields

off toward darker hills.

of the cliffs of light!

who drag the earth

the blown chaff of

Toward the end of the cycle, there is a sequence of four longer poems, with longer lines, that describe part of the poet’s (or narrator’s?) spiritual journey. They seem different from the rest of the set, and are fascinating, but too long to quote.

I’ll end with a couple of stand-alone poems.

The Solitude of Glass

On stone of pollen

At the bend of sight

In a cold of glass--

The sun, a lichen

Spreading on the sky

with your weight of gold--

in an angry pride

These poems were a nice change from the others I have read this year, with a rather different style and cadence. I feel like I have discovered some gems I was unaware of previously. Winters is worth a read.

Posted by Diary of an Autodidact at 10:21 AM