The Vegetarian by Han Kang

I try to read a number of books in translation every year. I believe it is important to hear other perspectives, experience other artistic values, and generally be a citizen of the world. To that end, I follow a number of literature-related sites, most notably NPR’s book reviews and Lithub, both of which have helped me discover outstanding books that I would not otherwise have experienced. The Vegetarian was on Lithub’s list of best books in translation from the last decade. Korean author Han Kang wrote it in 2007, but it was not translated into English until 2016, by Deborah Smith.

My foreign literature reading project has been interrupted a bit this year by library closures, unfortunately. Last month, at long last, the libraries have reopened for curbside, at least, and I was able to get this book. 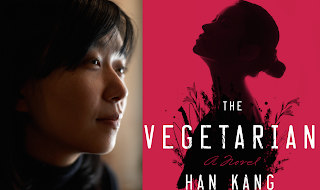 It is really hard to describe this book. It could be considered horror, or perhaps psychological horror. It is decidedly literary fiction, and deserving of the Man Booker award it won in 2016 for the English translation. It is realistic yet fantastic. It occurs both in the world at large and in the mind. And, ultimately, it ends in a really dark place, and with an impossible question: since humans are violent and horrid, can one continue to live as a human without doing violence to one’s self?

The book is in three sections, each from a different perspective. What is unusual is that the subject of the book, Yeong-hye, is never given her voice. She barely speaks in the book, and the perspectives are those of others. She is, as Ilana Masad noted in her Guardian review, an object more than a subject. It is her actions which speak most, however, and in fact constitute both the core of the book and its central theme.

In the first section, told from the first-person perspective of Yeong-hye’s husband, Mr. Cheong, she has a dream in which she has a vision of human violence and the horror of flesh. She responds by throwing away all animal products, and becoming a vegan. And not a healthy one, as she restricts her diet to the point of starvation. During a visit with her family, her violent father strikes her and tries to force meat down her throat. She grabs a knife and slits her wrist, which lands her first in the hospital, then in a mental ward.

The second section, in contrast, is in the third person, but from the perspective of Yeong-hye’s sister’s husband (who never gets a name.) He is a video artist, and when he checks on the now-discharged Yeong-hye, finds her unabashedly naked. He has the idea of taking a flower-shaped birthmark on her butt and expanding it into a flower-themed body painting. She consents to this, and he makes a video of it. He then becomes sexually obsessed with her, leading to both art and a really disturbing sex scene.

In-hye, Yeong-hye’s older sister, is the focus of the third and final part. The events of the first to parts have led to two divorces, and she is left to care for her young son and for Yeong-hye, who has deteriorated further physically and mentally, and is now starving herself to death in a mental hospital. By the end of the book, In-hye appears to be suffering from a mental breakdown as well, while she comes to understand her sister for the first time.

It takes a while for all of the background to come out - Han delays revelations up until near the end in some cases. Yeong-hye and In-hye’s father turns out to have been abusive for decades, and Yeong-hye took the brunt of it. She wanted to escape, but couldn’t. She did not want her marriage, and Mr. Cheong is pretty much a dick who isn’t attracted to his wife but expects her to feed and service him without complaint or expectation of reciprocal affection.

In response to being stripped of her personhood, Yeong-hye leans into it, by essentially de-personing herself. As she seeks to become a tree, a plant, something that can live without the need to consume other organisms to survive, she is essentially rejecting her own humanity.

I can’t really say which section is the most disturbing. The first is disturbing because of Mr. Cheong’s self-centered and egotistical response to his wife’s changes, as well as the violence that he and her father inflict on her. There is never any real consideration of her feelings, or attempt to understand her perspective. She is an embarrassment because she refuses to conform to societal expectations, and they have to fix that.

The second section is disturbing for rather different reasons. The unnamed brother-in-law comes by his sexual attraction honestly, more or less, and his artistic idea seems both creative and sexy. But once he crosses the line to actually make it into sex between them, it gets psychologically disturbing on multiple levels. The issue of consent is there, because she is pretty clearly mentally ill, and it is not at all clear that she has that capacity. But also, she does become aroused, first by the brother-in-law’s colleague, who also agrees to be painted, but declines to have sex on video, and then by the brother-in-law once he has been painted to match her. It is the swapping of the skin from human to plant, so to speak, that makes her sexually respond. The third level of discomfort and horror comes, in my opinion, because of the way the book makes the whole messed-up psychosexual drama into a genuinely sexual and arousing scene. You want to be horrified, you want to hate it, but it is shockingly erotic, and you also want them to fuck and find yourself identifying with either or both of them in an unhealthy way. It’s fantastic writing, but I really had to clear my head afterward.

The third part is existentially disturbing more than anything. That question of how to live as a human, when our existence requires violence to other organisms, is not a comfortable one. It is a stripped-down version of the question of how to be a decent human when our very institutions and social structures are based on violence of one group toward another. Can one embrace humanity while we bomb the shit out of each other, deprive minority groups of basic necessities, and hate each other for religious differences? There is no easy answer to that one, and not even suicide has a final (if horrible) resolution. Yeong-hye’s disintegration (that seems the best word for it) hasn’t solved anything either, but has reverberated through her family in a way that has destroyed everyone else along the way.

What will probably remain with me the most from this book is the epiphany that the brother-in-law has at about the midpoint of the book, when he has finished filming himself painting Yeong-hye’s body with flowers.

Only then did he realize what it was that had shocked him when he’d first seen her lying prone on the sheet. This was the body of a beautiful young woman, conventionally an object of desire, and yet it was a body from which all desire had been eliminated. But this was nothing so crass as carnal desire, not for her--rather, or so it seemed, what she had renounced was the very life that her body represented.

There is an echo here of the “saints” of the past in my own religious tradition, who “mortified the flesh” in hopes of transcending their humanity. It is not something I myself understand - that’s definitely not my reaction to my body and my embodiment. Which is, perhaps, one reason this book is as disturbing as it is.

I should probably say a few words about the translation. I do not know Korean at all, so reading the original is out of the question. What I can confirm is that the English version is beautifully written. The language itself is compelling, and it was difficult to put the book down, even as my emotions forced me to step away at several points. What Deborah Smith did with the book is pure art.

Apparently, however, it is not exactly true to the original. And this is where things get complicated. Smith worked closely with Han throughout the process, and Han has publicly defended the translation. Other Korean critics, however, having read both books, has said that it is more of an adaptation than a translation, and that there are significant changes. What to make of this? I have no idea. Perhaps the best analogy is that of a book and a movie in which each is a work of art, even though they differ.

In any event, this is a worthwhile book, as disturbing and beautiful as it is.

Posted by Diary of an Autodidact at 12:46 PM