Source of book: Borrowed from a friend

My legal colleague Jay has recommended a number of books, most notably the Dissolution series by C. J. Sansom, which I really love. The discussion that resulted in my borrowing this book started with my post about How to Invent Everything by Ryan North. 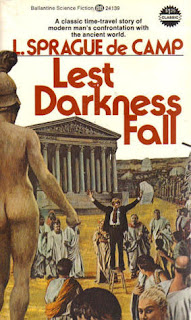 Lest Darkness Fall is probably L. Sprague de Camp’s most famous book, although he wrote extensively in both Science Fiction and Fantasy. He was considered one of the major figures in Science Fiction during the 1930s and 1940s. My favorite trivia question about him is the fact that he coined the term “Extra Terrestrial.”

Lest Darkness Fall was first released in a shorter version in 1939, then expanded into a full novel.

This book is considered one of the first and most influential “alternative history” books, and is still considered to be a fine one. De Camp wrote it in response to A Connecticut Yankee in King Arthur’s Court, and there certainly are a lot of similarities. But there are also some key differences. The primary one is that Hank Morgan has no lasting impact on history, but returns to his own time. Martin Padway, in contrast, is unable to return, but is successful in altering the course of history - at least in the alternate timeline. The theory behind the book (and de Camp was obsessed with logical consistency) is that time travel starts a new timeline, but does not alter the old one, thus eliminating the “what if you kill your grandpa” problem.

Archaeologist Martin Padway finds himself sent back in time to Rome in 535 AD, right before the series of events that would lead western Europe into the Dark Ages. Padway, with his extensive knowledge of ancient history and enough Latin to communicate, decides to make the best of it, and perhaps even change the course of history.

I will confess that I haven’t ever read Gibbon, so my knowledge of the death throes of the Roman and Byzantine empires is a bit shaky.  I read this on vacation, mostly in locations without internet, so I wasn’t able to look up the rest. That said, de Camp did a good job of giving enough context so that I could follow the story and Padway’s strategy.

The book was a nice, quick, pleasant vacation read, in my opinion. I appreciated de Camp’s commitment to realism and consistency. For example, he thoroughly researched the technology of the time, and limited Padway’s knowledge to that of an educated man of his time. Padway thus couldn’t simply re-create gunpowder, or electricity. He had to work with what he had, and a limited knowledge base.

One result of this was that Padway gets his start in society by making brandy. He has some struggles getting copper pipe made, but both copper and pipe-making existed - the Romans just hadn’t realized lead was poisonous and made the substitution. Wine, of course, was abundant, and still making is not too hard once you know how. From there, Padway uses his knowledge of Arabic numerals and double-entry bookkeeping to win friends and gain influence.

There are a few rather dated aspects to the book. One is a bit of casual Islamophobia. The other is a reference to “Liberal Capitalism” as the counterpart to “Socialist Democracy” in the modern West. What is fascinating about this is that both concepts are pretty similar now, and are the default for much of the first world. “Capitalism,” however, has gone from the “Liberal Capitalism” of FDR and the post-war consensus, to become essentially social darwinism in action, the plunder of most everyone by a few rich and powerful people and entities. So, my thought was kind of like, “Ah, the glory days, when Americans at least believed in the common good for white people…”

Some parts of the book, however, seemed as relevant as ever. Padway, like the author, is not a religious person. However, sent back to a time when theology was assumed to be a most important topic, he has to adopt some form of religion to avoid being distrusted. In the world of the book, the Germanic conquerors of Rome tolerate a variety of religious beliefs, but one must tread carefully, because of the lack of general human rights and the risk of offending someone in power.

Padway comes up with an interesting way of deflecting the question. He openly gives his country of origin as “America,” which, of course, no one has ever heard of, but which is the perfect explanation for his accent and strangeness. He also finds a stock response to the ubiquitous question, “What is your religion?”

“I’m a Congregationalist. That’s the nearest thing to [insert whatever sect the questioner belongs to] we have in my country.”

It’s brilliant. It works for Orthodoxy, Arianism, Nestorianism, Maronism...anything. And this is important, because, well, here is an exchange that could have happened with many white Evangelicals today:

“No! Not with the persecution we have to put up with!”

“Religious persecution. We won’t stand for it forever.”

“I thought the Goths let everybody worship as they pleased.”

“That’s just it! We Orthodox are forced to stand around and watch Arians and Monophysites and Nestorians and Jews going about their business unmolested, as if they owned the country. If that isn’t persecution, I’d like to know what is!”

“You mean you’re persecuted because the heretics and such are not?”

“Certainly, isn’t that obvious? We won’t stand--What’s your religion, by the way?”

I have re-read this passage numerous times, and it seems more brilliant each time. This is EXACTLY what Evangelicals mean by “persecution.” There are all these LGBTQ people, Muslims, Jews, Atheists, and so on walking around and living their lives unmolested, as if they too were Americans! Evangelicals want to persecute them so bad that they feel persecuted when the law prevents them from taking out their rage and hate against others not like them. That’s the appeal of MAGA, and of phrases like “take America back.”

I have to also mention another line that reminded me of our own time. Remember when the Duck Dynasty asshole said you should marry girls off in their mid teens, before they get uppity and won’t pick your ducks for you? Well, here is the line from the book:

Anicius sighed. “If you ever have a daughter, Martinus, marry her off early, before she develops the critical faculty.”

That didn’t work that well for either my wife or my daughters, all of which had both the critical faculty and minds of their own since they were old enough to talk. Fortunately, I prefer strong women.

Padway nearly gets engaged to a royal woman he rescues from having to marry a lunk. However, they turn out to not be that compatible. I kind of resemble Padway in the way she describes him.

“Martinus, you are the funniest man. I suppose it’s that you and I are different. I go directly for what I want, whether it’s love, or revenge, or anything else.”

“You walk all around it, and peer at it from every angle, and spend a week figuring out whether you want it badly enough to risk taking it.”

The moments like these are quite good. My one problem with them was that they mostly occurred in the first half of the book. Once the military stuff takes over, that narrative largely swamps everything else (well, kind of like war, I suppose…) and the book ends with a bunch of battles and little philosophy. I particularly wanted to see how Padway resolved his own sense that he was losing his moral values in pursuit of his goals, but we never get that resolution.

That said, this was a fun book, thoughtfully written, logical and consistent, and a fascinating “what if?” book. A couple of my kids started it, and I will have to ask them what they think of it when they finish.

Posted by Diary of an Autodidact at 3:51 PM