Tartuffe by Moliere (Moliere in the Park 2020)

As I have mentioned before, I was homeschooled from 2nd grade on, after two years of missing school regularly due to my poor health. After 9th grade, my mom realized she wasn’t really able to teach me stuff like algebra. At that time, there weren’t a lot of great options available like there are now, so we went with the (new at the time) A Beka video courses. The advantage of this was real video of real classes, as well as the fact that I actually have a high school diploma from the school. (This isn’t a huge deal in California, because you can take an equivalency exam and get a state diploma here rather than just a GED, but still.)

There were advantages and disadvantages to the course. It certainly meant I learned math and science at a level my parents otherwise couldn’t have taught. Most of the teachers were actually quite good and a joy to learn from. There were a few duds, though. The mandatory bible course each year was...tedious. I mean, singing “The Bible Stands” every single freaking day. And what IS it with a certain quasi-Baptist tradition and waving arms to “lead the singing” without the motion having ANYTHING to do with the time signature? Gah! (We also got that in Gothard’s cult and in churches we were in. Either learn to conduct or play a guitar or something.)

Possibly the most influential subject for me was English, specifically the 10th Grade (World Literature) and 12th Grade (English Literature) classes taught by Mr. William Collins. Mr. Collins was most certainly not like the stuffy and hypocritical character in Pride and Prejudice. He was an old, somewhat crust sort, who probably wished he was teaching at the college level. But he loved his subject and went out of his way to teach it well. And, in his own way, he subverted the “values” of Fundamentalism whenever he could, giving background that was not in the bowdlerized curriculum, pointing out in a backhanded way the naughty parts (I suspect it went over the heads of both students and parents), and refusing to parrot the “analysis” in the book. I learned a lot about literature, discovered books I hadn’t heard of before, and got a fairly solid foundation in literature up through about the 1930s. (A Beka in general pretends that modernism and postmodernism didn’t happen. Ditto for the Civil Rights movement.)

One of the things in retrospect that is interesting is the choice of books. Many paralleled the public school curriculum. We did The Scarlet Letter, Julius Caesar, and Macbeth, as have my high schoolers.  But some choices were...different. Not in a bad way, necessarily. Other than missing 20th Century works, the substitutes were worthy choices. For example, rather than Oedipus, which is the usual choice, we read Antigone. I assume that the Fundies who wrote the curriculum didn’t want to have the whole “sex with your mother” thing, which is why they went with Antigone. Mr. Collins, of course, was happy to fill the class in on the themes of Oedipus so we wouldn’t miss out. Antigone is a great play, though, and I think it the better choice, with its questions of rules versus morality - ironically subversive of the Fundie worldview.

The one most unusual substitution, however, was Tartuffe by Moliere. I read this in 10th Grade and very much enjoyed it. I have loved Moliere ever since, finding his plays to be startlingly relevant in our time, despite being over 300 years old. Tartuffe was also an interesting choice because it is the story of a religious huckster and hypocrite who worms his way into the life of a gullible aristocrat, and nearly succeeds in stealing his property and raping his wife. Hmm. Not that much different from sexual predator Bill Gothard who managed to fool my parents. And yes, I felt a bit like Damis trying to explain why I didn’t want to join.

Anyway, here is the basic idea. Orgon is the father, and he has (along with his mother Madame Pernelle) become infatuated with Tartuffe, who has played on his sympathy, claiming to be a formerly wealthy man who lost it all. Tartuffe drips piety, asceticism, and religious obsession. Soon, Orgon will do nothing without consulting Tartuffe.

The rest of the family sees right through him. Orgon’s wife, Elmire, is genuinely pious, and realizes right away that Tartuffe is putting on a show. In fact, there is a line in the play (which I cannot find easily) to the effect that genuine religion doesn’t show off, but performative piety (which I need to write about) hides bad morals.

Orgon’s adult children (Elmire is the stepmother) likewise are astonished at how gullible and foolish their father has become. Damis is the hotheaded son who would love nothing more than to turn Tartuffe out with a sound beating. Mariane is engaged to Valere, who, as an outsider to the family, has few options if Orgon won’t give his blessing. In addition to the family itself, Elmire’s brother Cleante tries to talk sense into Orgon. Finally, the maid, Dorine, loathes Tartuffe, and uses her wit and her schemes to expose him. (In all Moliere plays, the maid gets the best and most pointed lines. In essence, she is allowed to say things the aristocrats can’t.)

Tartuffe overplays his hand, however, by trying to seduce Elmire. Interrupted by Damis, he uses a combination of reverse psychology and lies and gets Damis banished by his father instead. Orgon even refuses to listen to his own wife, insisting she misunderstood. Orgon insists that Mariane marry Tartuffe against her wishes, and eventually even signs his property over to Tartuffe. Finally, Elmire insists that Orgon hide under a table and watch Tartuffe, who tries again to seduce Elmire. At that point, Orgon finally sees the light - but now his property is gone, and his reputation is compromised. It is only the intervention of the king himself which rights the injustice at the end.

Moliere, despite living a rather soap opera life, was not anti-religious, even if the religious establishment got their panties in a wad over Tartuffe. It is clear that he isn’t condemning religion, but the twin evils of hypocrisy and gullibility. It is easy to see so many religious charlatans in this play, from Gothard on down, of course. But also, in our own time, it is easy to see Tartuffe as Trump, performing his piety and fooling gullible white Evangelicals, who are all too willing to sell their souls.

The performance in this case was interesting. Put on by Moliere in the Park in Brooklyn, it was a “virtual” stage, so to speak. There was a basic background of the interior of the house, and the faces of the actors appeared as they entered and exited. It was done as a “green screen,” which made for some weird glitches, just like a Zoom meeting. At the very end, we get to see the actors in their homes, where the performance was recorded. Ah, the age of Covid-19 and the compromises artists have to make. I salute their creativity, and will refrain from further comment on the glitches. 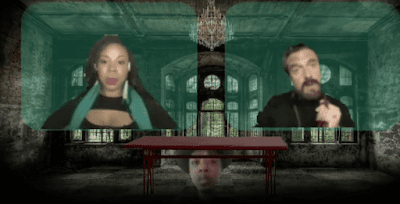 Orgon hiding under the table while Tartuffe attempts to seduce Elmire

The acting, in any event, was superb. These are true professionals in the best sense, and they brought the chemistry despite distance. The cast was African American with four exceptions: Tartuffe, Dorine, Madame Pernelle, and the bailiff. Orgon was played by Samira Wiley, in a trousers role. She was so convincing as a chauvinist male that I didn’t realize it until I looked at the cast afterward. She was perfect as a counterpart to the smarmy Tartuffe, played by Raul Esparza (with a beard that made him look like Ray Stevens). Also props to Naomi Lorrain as Damis - an older sister rather than brother in this production, which felt natural as well. Kaliswa Brewster was innocent and vulnerable as Mariane, Toccarra Cash brought gravitas and confidence as Elmire, and Jenny Mudge was brassy and snarky as Dorine. Actually, everyone was excellent, and I appreciated the fine acting, particularly under challenging circumstances.

The text was the Richard Wilbur translation, which preserves the rhymed couplets, yet sounds modern and understandable. There were French subtitles for those who can read French.

I am seriously sad that I missed their version of Le Misanthrope earlier in the year. I love that play, and it appears to have had Samira Wiley in a “Make America Gay Again” hat, which...well...that sounds interesting. I’ll be following them and watching the next show, if possible.

Posted by Diary of an Autodidact at 3:41 PM