I was homeschooled from 2nd grade on, but for my last three years, I used video courses for my subjects. Although the coursework had some flaws, coming from Fundie publisher A-Beka, in general, the teachers were pretty good. I have a particular fondness for Mr. Collins, who taught 10th and 12th grade English. A crusty old guy, he was quietly subversive, going outside Fundie orthodoxy in his teaching (in a subtle way - that’s presumably how he kept his job) and really inspiring a love of literature. I have no idea if he is still living, but in any event, kudos to him for part of my good education.

In that 10th grade class, we studied World Literature, starting with Gilgamesh, but I particularly remember enjoying our study of Antigone. While it appears that most of my peers (and my own kids) get Oedipus Rex, we skipped that one. I wonder if it was because of all the sex in Oedipus, or if the writer of the curriculum just liked Antigone better. Whatever the case, Mr. Collins made sure we knew the backstory before we read the play. (As I said, a bit subversive.) Whatever the reason, though, I was moved by Antigone, and was thrilled when our local university announced that they would be doing it this fall.

Antigone’s story is both of its time, and timeless. In the aftermath of Oedipus’ death, his sons Eteokles and Polynikes quarrel over the throne. After initially agreeing to alternate years, Eteokles clings to power. Polynikes raises an army and attacks. Both brothers die in the ensuing battle, and Oedipus’ brother Kreon takes the throne. Kreon decides that Polynices’ actions are treason to the city of Thebes, and forbids the burial of his body. I admit some ignorance of Greek thought, but at least to our modern minds (and perhaps to the minds of the Athenian audience the play was directed at) it seems a bit unfair to consider the deal-breaker the good guy, and the other brother the bad guy.

In any event, Antigone, who is the sister of the two brothers, is horrified at the decree, and takes action - a scandalous thing for a woman to do in that era. She buries her brother, and mourns his death. She then defies Kreon to his face, asserting that Divine Law (as she believes it) to be superior to his human law. Kreon is furious, and orders her shut up alive in a tomb, to die of thirst and starvation. Kreon’s son, Haimon, who is in love with Antigone, please with his father to be reasonable, citing (in addition to personal and moral reasons) the fact that the citizens of Thebes are horrified by his action. This leads to a tremendous fight between the two.

After a soothsayer prophesies doom to Kreon, he has a change of heart, and goes to release her. It is too late, however, as she has hung herself. The damage doesn’t stop there: Haimon, caught between his love for Antigone and his duty to his father, also commits suicide. In despair over the loss of her son, Kreon’s wife, Eurydike, kills herself, leaving Kreon alone - and he goes mad.

While the specifics of the story may seem a bit outdated - we don’t have kings or primogeniture in 21st Century America - the themes resonate. Both Antigone and Kreon have valid points. Antigone is certainly right that Kreon’s law is unfair and cruel. She is also right, in theory, that sometimes a higher law supersedes a lower law. Whether one considers it a divine decree, or a moral principle, it can and should justify civil disobedience. On the other hand, Kreon is right that if everyone did what they saw fit, rather than followed the law of the land, anarchy would result. After all, humans find agreeing about what the gods want to be an impossible task.

As the Thebeans and the soothsayer point out, however, the best way is neither anarchy nor cruelty. Laws should be just, and if they are not, they should be changed. Admitting one’s error isn’t weakness (as Kreon insists), but an actual strength. Kreon realizes this too late, and is destroyed by the consequences of his stubbornness.

Antigone is stubborn too, of course. She knows she will likely die as the result of honoring her brother’s body. But at least Antigone has solid reasons for her actions. She sees through the arbitrary assignment of fault, and insists that morality requires respect for the mortal remains of both of her brothers. She believes the gods require that corpses be treated with respect, and not left for the animals to gnaw. While we may not believe in Zeus and the rest, we moderns generally agree that even the bodies of executed murderers deserve a decent burial.

There is something awe-inspiring about Antigone. In a highly patriarchal world, she has the huevos to take on the most powerful man in her world. She never flinches, she never blanches, she never cries. She just takes her badass self right up to Kreon’s grill and kicks his butt with her rhetoric.

This particular production is worth mentioning for several reasons. First, CSUB used the new(ish) Anne Carson translation as the basis for the production. This version is not an attempt at word-for-word translation, but as much a re-imagining of the play. The speeches are much shorter. The total length is just over an hour. There are anachronistic allusions to Hegel and Beckett, as well as modernity in general. But there are also some darn fine lines, and Carson’s experience as a poet makes the play much more, well, poetic, than the usual prose translation. It isn’t rhymed or metered verse, but a modern, free-verse poetry that feels thoroughly unlike prose.

There are two things that I particularly loved about Carson’s version. First, by updating not just the language, but the way of talking about ideas, she made a play that my kids (even my youngest) could follow without difficulty. Second, the update brings out facets of the drama that might have gone unnoticed, such as the misogyny of Kreon, and his opportunistic lust for power. Both of these were not important to the ancient Greeks, but they strike modern audiences as crucial elements of the tragedy. Sophokles probably intended that we be horrified by Antigone stepping out of her lane, even if she is right. But we can understand her actions not just as “woman is so stricken by disrespect of the gods that she has to act like a man” but as “part of Kreon’s problem is that he thinks he knows better than women.”

On that note, I must commend Avery Gibson for her outstanding performance in the title role. She commanded the stage whenever she was on it, and brought a simmering fury that could be felt to the last row. I hadn’t seen her in anything before, although she was in a BC production of Into the Woods that the rest of my family saw a few years back. I’d love to see her in other roles. I should mention my favorite line from the play, which is spoken by Antigone about the horror of an unburied body: “sweet sorrymeat for the little lusts of birds.”

Kreon was portrayed by Brian Purcell, who has been in a bunch of local plays and musicals, most recently Crazy For You at Stars. His natural style is kind of a “boy-next-door gee shucks” sort of thing, so this role was something entirely different. I liked the way the character evolved from the seemingly reasonable and calm statesman to the increasingly angry, unpredictable, and paranoid madman. His Kreon was a bit more likeable than average, although it was a bit more difficult to see the calculating politician. The result was that Kreon seems less drunk on power and more a misguided “play by the rules” sort, obsessed with a black and white worldview, in which there are too few shades of grey.

Other notable performances in smaller parts were Alexandria Dennis as the hapless and humorous Messenger, Amanda Duke as the jaded soothsayer, and Alberto Pelayo as Haimon.

The use of the Chorus was creative. The members wore masks, and commented both individually and in groups, throwing the poetry around the stage, and deadpanning some great lines. I really enjoyed the way it was done - it made the chorus seem like its own work of art, and not just there to comment and carry the action forward.

Finally, the set was amazing. It combined a desert wasteland with a decaying Southern mansion. Both the conception of the design and the many hours that must have gone into construction were impressive.

CSUB has done some intriguing things with drama lately, from the gender-flipped The Importance of Being Earnest to the intimate Eccentricities of a Nightingale. Bakersfield has a thriving arts community, and the future looks bright with so many talented and well-coached young actors coming up through the ranks. 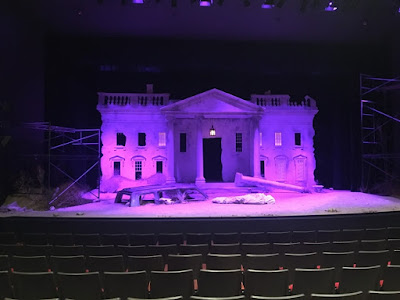 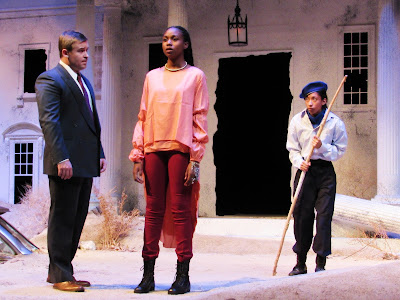 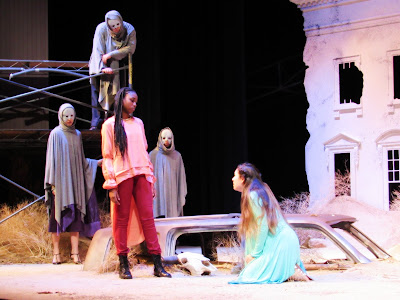 I am using the spellings CSUB used for the play, which I believe were also used by Carson. In substituting “k” for the traditional “c,” the correct pronunciation is more obvious.

Posted by Diary of an Autodidact at 4:38 PM