Source of book: Borrowed from my in-laws

With hotel based travel risky right now, we have pretty much stuck to camping and outdoor recreation. One exception is our trips to my in-laws’ mountain cabin in the Southern Sierra, where my wife lived for much of her youth. There is a rather eclectic collection of books there right now. They took most of their stuff with them when they moved north, but left behind a motley selection, including weird stuff from their Fundie Cult days, extra copies of outdoor identification guides, some random Wodehouse, Elsie Dinsmore, and classic children’s books. More specific to the house, however, are a number of books about local history, including this one.

This particular book, which does indeed start the title with a number in digits in violation of convention, tells of the predominantly white history of the area, starting in the late 1800s. I mention “white history” because the story essentially starts with the eviction of the Native Americans from most of the land, and their placement on the reservation in the area. From then on, the various stories about the towns past and present are all about the white settlors whose families were important back in the day. The book was written in 1986, which explains a bit about the viewpoint presented. I wouldn’t say it is particularly racist, because it isn’t, but it is dated, if that makes sense. We don’t use “Indians” now, for example. And the book mentions the “Indian Wars” from the perspective of inevitability, even though the author is sympathetic.

While Jeff Edwards is the author, the stories themselves aren’t his. He draws from and extensively quotes older sources, including newspaper articles from the different decades, and interviews with those whose memories reach back to the people described. That too explains some dated views. When people born in the 1910s, for example, tell their stories, they have certain perspectives, and their knowledge is limited to people like them.

I don’t want to create a negative impression here, but I do want to describe the book’s limitations. It is from a certain perspective, and other voices are not heard, just due to the nature of the book.

The history itself is quite fascinating. The Tule River area was first settled by a combination of miners, loggers, and ranchers, although mining turned out to be a dud for the most part. Things like log flumes, railroads, wagon roads, and camps fascinate me anyway, and knowing the area fairly well made it an interesting read.

The best part, by far, however, are the hundred or so old photos that the author collected. The hours that Edwards had to have put in on the interviews and photos must have been incredible. The quality of the reproduction is excellent, as is the book itself. He didn’t cut corners. 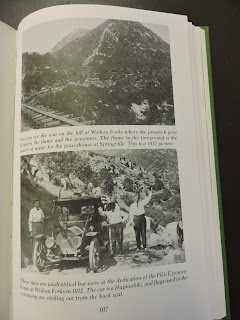 The stories themselves are a bit dry. I attribute that mostly to the fact that the people involved assume that the reader knows the descendents of the old folks and cares about how they all intermarried. Which makes sense if you have roots way back in a community. It’s a bit less interesting for someone like me, who is essentially the third generation of an unrooted branch of our family. (My grandfather left his hometown, and, after a couple decades overseas, settled in the Los Angeles area. My dad moved us around a bit, before my brother and I eventually settled in Bakersfield. The closest we have to place roots are the branch of my dad’s family that still farms and ranches in eastern Montana, where my immigrant ancestors settled.) Without knowledge of the old families, I had a hard time caring enough to keep the branches straight.

On the other hand, there are definitely compelling stories in the book, many humorous, like the time a planned dance was cancelled after a deacon showed up with a shotgun to protest. The slice of life in the past is fascinating too. The days with a communal telephone in the post office, the horrifying infant mortality rate, the way buildings regularly burned to the ground, and so on. There were plenty of ornery women in this book, belying the fantasy that in the past women were somehow submissive. There were the jealousies and murders, the pranks and jokes, the brief obsession with tennis, and the constant search for reliable water sources.

I browsed this book over about a month, and it was a nice change from the other stuff I have been reading.

Posted by Diary of an Autodidact at 10:44 AM