With theater venues closed due to Covid-19, our local thespians have had to be creative in order to keep making art. The Empty Space was on the verge of staging this play when the shutdown ended live in person theater for the foreseeable future. After a few months of limbo, they decided that the safest and most feasible way to perform it was to do an audio version. While I missed the wonderful set (which at least made it into the photos) and the visuals of the actors faces, the audio version was good, in the way that the old radio dramas were. Without the benefit of body language and facial expressions, the actors rose to the occasion and made the story come to life.

Sarah Treem apparently has written a bunch of TV stuff in addition to her plays, although I will confess that as one who rarely watches TV, I wasn’t familiar with her. This 2014 play was a worth selection, in any case, despite a few flaws.


When We Were Young and Unafraid is set in the early 1970s, somewhere off the coast of Washington State. This was before Roe v. Wade, when abortions were still criminalized, marital rape wasn’t a crime, and victims of domestic violence had far fewer options to support themselves.
Agnes, played by the always-delightful Julie Gaines, is the owner of a bed and breakfast that doubles as a shelter for battered women. She lost her nursing license for performing abortions, as we come to find out. 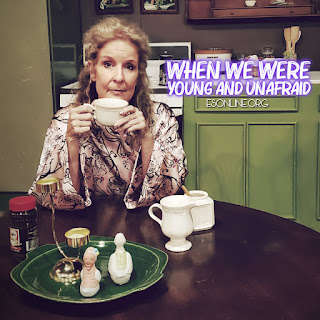 She has a teen daughter, Penny, played by Elise Esquibel, who has high hopes for college, but is attracted to the football star. 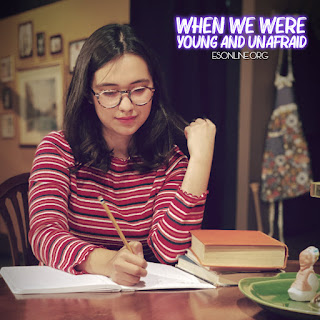 Mary Anne (Lindsay Gunn) shows up, with a battered face bad enough that she needs stitches, but is torn between her need for safety and her love for her abuser (who is suffering from PTSD from his military service.) 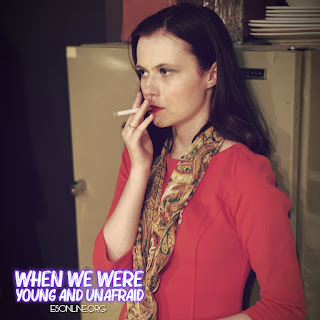 Soon after, radical feminist lesbian Hannah (Claire Rock) essentially breaks in and demands a job and becomes a missionary for the radical group she is in. 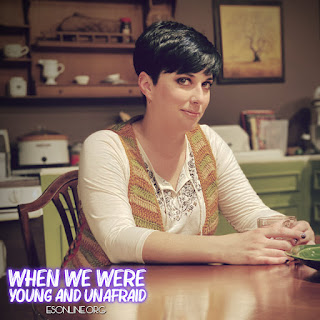 
Finally, the one male character, Paul (Alex Mitts), is a tourist staying at the B&B, who gets sucked into the drama. 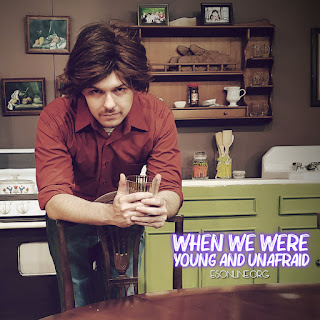 Alex Mitts as Paul
First, the flaws, which are not at all the fault of the actors. The play starts off strong and focused, but seems to devolve a bit at the end into what almost seem to be teasers for future episodes. Will Paul and Mary Anne end up together? Will Penny forsake her college plans for her worthless boyfriend? Will Hannah seduce Agnes? These are not really resolved at the end, either, with the play finishing abruptly. One wonders if Treem couldn’t decide how to end it, or if she got bored with the project and had to finish it. Although I cannot say how I would have ended it, it seemed like it needed maybe an extra half hour of time to tie things together and return to a sense of theme.


That said, the play did have a lovely nuance in its look at domestic violence. I have assisted victims throughout my practice (often on a volunteer basis), and the relationship dynamics are portrayed accurately and empathetically. This was definitely helped by the excellent acting - all of the characters felt human even when they were written a bit as types.

I also liked the way Treem correctly linked the fight against domestic violence to the fight for female reproductive rights. One of the most eye-opening things of the last decade for me was to actually look at the history of abortion in America, and realize just how dishonest the Anti-Abortion Industrial Complex™ is about it. Pre Roe, it was the same collection of medical workers and women protecting victims of domestic abuse - and a surprising number of clergy - who worked together on both issues, realizing that they are intimately connected. Marital rape, violence against women, and forced pregnancy go together because they all derive from a particular anti-feminist view of the role - and value - of women.

For this particular production, the acting was indeed excellent, and the casting spot on. I have enjoyed a number of the actors previously. Julie Gaines is a local stage veteran, and has been in several productions just this year. She brought gravitas and vulnerability to the role. Claire Rock has long been a favorite of mine, with a particular highlight being her turn as a greaser version of Tybalt. She seems attracted to oddball roles, and this one was no exception. Hannah is the “chaos muppet” in the play, whether it is fixing stuff at the B&B without the knowledge or consent of Agnes, or breaking and entering in the middle of the night, or blithely lecturing Agnes on feminism when Agnes clearly is more of a veteran in that cause than Hannah. If anything, I wish that role had been bigger, because it was fun.

Alex Mitts is another versatile actor - and singer, as he gets some airtime in that role as well. He made Paul likeable and believable, despite a role that didn’t get much time to develop. Mitts also did the sound design, which I thought was good. I particularly appreciated the clear sound and balanced volumes, which must have been a challenge under the circumstances. Likewise, Brian Purcell, who kind of does everything behind the scenes in addition to his stage work, was fine as narrator filling in the gaps when visuals were needed to tell the story.

I wasn’t that familiar with the other two actors before this production. Elise Esquibel is pretty young, which worked well for Penny for obvious reasons, but she brought a lot of personality to the role as well. The one thing not in her favor is that the script calls for her to act against her seeming personality by going from a “all set on college and study all the time” girl to someone willing to throw it away on “love.” Not Esquibel’s fault, of course, that the script doesn’t really set the stage for the transformation. She was believable enough in both personas, but I felt they were disconnected, basically two different people.

I also enjoyed Lindsay Gunn as Mary Anne. This was a tough role in that she had to portray so many facets of a character, from the scared victim to the determined woman to the giddy girl advising Penny about love, to the wife desperate to fix her broken husband, and so on. Gunn navigated the changes well. Now if only Treem had let us know how it all worked out for Mary Anne!
Plot issues aside, this was an excellent and thoughtful performance, and well worth the super-low cost. It runs through the next two weekends, and is available online, of course, so anyone can experience it. Support local arts!

More information is on esonline.org, or The Empty Space on Facebook.

Posted by Diary of an Autodidact at 3:28 PM