The Red Pony by John Steinbeck

I have been reading through our Steinbeck collection bit by bit over the last few years. You can read my other posts about him here:

Of Mice and Men (Novel)

Of Mice and Men (Play)

In addition to these, I read The Grapes of Wrath before I started the blog - the latter half of it is set in and around where I live, and my wife got to interview a number of the remaining Dust Bowlers back in her college days. 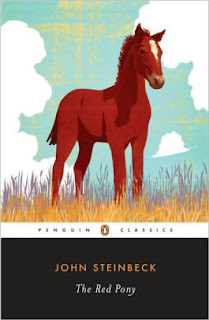 The Red Pony isn’t so much a novella as a collection of four related short stories. All of them are set on the same farm in the Salinas Valley, and feature mostly the same characters. The title is taken from the events of the first story, which is not entitled “The Red Pony,” but “The Gift.”

I chose to read The Red Pony for two reasons. First, it was the next in the book containing Steinbeck’s short novels. But more than that, I was already familiar with music inspired by the book. There have been two movie adaptations of The Red Pony. The first was in 1949, and starred Robert Mitchum. The score for that version was written by none other than Aaron Copland. A number of years ago, I got to play excerpts from that score for a concert of movie music we did. It is wonderful music, and I never forgot it. Here is a bit:

The second movie version came out in 1973, and was a television release starring Henry Fonda and Maureen O’Hara. This version featured a lush and evocative score by Jerry Goldsmith. I haven’t seen either movie, so I can’t comment on whether they were any good. However, the music is great in each version, as expected when composed by two of the all-time greats in movie composition.

Okay, so much for the music. What about the stories? Well, they are definitely Steinbeck stories. They are naturalistic, realistic, tragic but not despairing. The characters come to life, the language and writing are incredible, and the stories are compelling.

All of the stories center around Jody, a young boy with an often-distant father, a busy mother, and a kindly farm hand, Billy Buck, who Jody idolizes. The stories can be seen as a growth process for Jody, as he comes to understand the realities of life in all their messiness and humanity.

In “The Gift,” Jody, age nine, is given a red colt, who he attempts to care for faithfully with help from Billy. Sadly, the colt catches a cold which turns into pneumonia, maybe as the result of a freak rainstorm. This is not the fault of Jody, who did what he was told and was at school when the colt got out. It also isn’t the fault of Billy, who works tirelessly to save the colt. It is just rotten, horrible, bad luck. Life, in other words, and this is Jody’s first real exposure to the cruelty of nature and the fact that the adults in his life are powerless to fix everything.

The second story, “The Great Mountains,” is rather different. An old “Mexican” man, Gitano, shows up at the ranch, claiming he was born there, and wants to spend the twilight of his years there. Jody’s dad, Carl Tiflin, lets him stay the night, but tells him he can’t afford another hand, and doubts the old man can do much work anyway. (Which might be true.) Gitano is as “broken down” as Carl’s ancient horse. But the horse gets to stay, put out to pasture. Later, Gitano steals the old horse (not that Carl minds that much), and is seen headed for the mountains.

This is a really touching story in a lot of ways. Steinbeck’s compassion for the vulnerable comes through; but more than that, his wonderful ability to humanize those who we tend to overlook or discount. Learning to see Gitano as a human with dignity is part of Jody’s growth process.

[Also of note here, based on the technology - or lack thereof - in the story, I would say that it was set, like Of Mice and Men, sometime in the 1920s or earlier. California was part of Mexico prior to 1848. So, it is likely that Gitano is a “Mexican” because he was born in California when it was part of Mexico. A better term might be “Californio,” the inhabitants of California under Spanish, then Mexican rule. He has almost certainly been a Californian longer than Carl, and has, in his way, a better claim to the land, although not as strong as a Native American would.]

The third story, “The Promise,” also revolves around horses. Carl decides to breed his mare, and promises Jody the colt, since he did his best with the red pony. Alas, things again go wrong. The colt is born, but the mare dies giving birth. Jody has to come to terms with one of the hardest lessons of his life:

And Billy knew he [Jody] was thinking of the red pony, Galiban, and of how it died of strangles. Billy knew that he had been infallible before that, and now he was capable of failure.

The story is also the tragedy of Billy Buck. None of this is his fault. By all accounts, he is the best horse doctor in the area, yet he is smitten by two unlucky events beyond his control, and both serve to damage his reputation with Jody. In the end, Jody has to work through this, and embrace both truths about Billy: he is fallible and human, and he is good and caring. Billy’s failure does not diminish one iota the fact that he is a decent human being who is good at what he does, cares for people and animals, and deserves to be Jody’s hero for good reasons. But he is no superhero, just a good guy doing his best. This is one of those hard lessons we all learn about our heroes sooner or later.

The final story bookends the second, just like the first and third correspond. In “The Leader of the People,” Jody’s maternal grandfather comes to visit. He led one of the great wagon trains to California back in the day, and he still lives in those glory days. This irritates Carl, who has heard them ALL before, and wishes grandfather would just shut up. Jody, on the other hand, remains fascinated, as young boys will. And, as he is growing up, he is learning what his father lacks: empathy. He gets that from his mom.

“Look at it this way, Carl. That was the big thing in my father’s life. He led a wagon train clear across the plains to the coast, and when it was finished, his life was done. It was a big thing to do, but it didn’t last long enough. Look! It’s as though he was born to do that, and after he finished it, there wasn’t anything more for him to do but think about it and talk about it.”

Grandfather kind of agrees, too, but he doesn’t have any more great adventures to have, alas. It doesn’t help that times have moved on, and what seemed so exciting and great back then now seems, in some respects, icky. Jody wants to do a “mouse hunt,” that is, turn over a haystack that has become infested with mice, and let the dogs chase and eat the mice. It doesn’t seem sporting, although, in the case of mice, it is probably necessary. But when Jody notes that it isn’t as exciting as hunting Indians, his grandfather responds with a perceptive comment.

“No, not much--but then later, when the troops were hunting Indians and shooting children and burning teepees, it wasn’t much different from your mouse hunt.”

Steinbeck was writing this in the 1930s, long before a majority of white Americans would start to reckon with our legacy of genocide. As usual, his recognition of common humanity was ahead of his time, and, while our preferred terms have changed (“Indian” is no longer appropriate), Steinbeck’s ideas have aged quite well. It’s funny how that happens when your view of fellow humans is driven by empathy and equality rather than racism and hierarchy.

In some editions, there is a fifth story, “Junius Maltby,” which does not appear to be related to the Jody stories. It is not in my edition, so I didn’t read it.

The Red Pony is a fascinating set of stories, and well written. I continue to enjoy my exploration of Steinbeck.

Oh, and I might mention, my 14-year-old son didn’t bring books of his own on our latest camping trip, so he ended up borrowing mine. He picked up the Steinbeck when I was done with it, and asked where to start. I told him Cannery Row, which loved so much he read two more novellas. He is now a huge Steinbeck fan, which bodes well for his high school English classes.

Posted by Diary of an Autodidact at 4:00 PM