Source of book: Borrowed from my kid.

Since my second kid introduced us to Richard Peck about 7 years ago, we have greatly enjoyed his books. He writes with a broad range, from historical fiction to modern ghost stories to Victorian mice to slapstick. Here are our previous selections:

A Long Way From Chicago

The Mouse With the Question Mark Tail

The River Between Us

A Year Down Yonder

I was surprised to discover that we hadn’t listened to a Richard Peck book in quite some time. I believe that there is only one more audiobook in our library system. Indeed, this book doesn’t appear to have been made into an audiobook at all, which is sad. It would make a good one. I bought the book and read it to my younger kids. 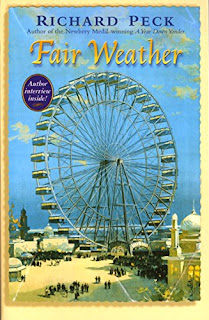 The story behind this book is kind of interesting. Originally, Peck wrote a short story about the World’s Columbian Exposition in Chicago in 1893, entitled “The Electric Summer.” Unlike some of his other stories, which became the beginnings of other books, this one inspired a novel that was somewhat different from the story.

The short story was perhaps my favorite of his, being a nuanced coming-of-age story, with a perceptive take on the relationship between a mother and daughter. The novel is rather different, with additional characters, and significant plot changes. In a way, this was disappointing, because I had kind of hoped to read a longer version of the original story.

But that really is unfair. After all, there is nothing wrong with the book - it really is delightful in its own right. Peck decided to write a less serious and more humorous book, and also direct it more toward tweens than young adults like the original.

Here is the basic idea behind the book. Rosie Beckett and her family live on a farm in rural Illinois somewhere. (The fictional “Christian County” - while there are counties with that name in Kentucky and Missouri, both are too far away to work for the train trip described.) Their life is, to Rosie, pretty boring and predictable. She isn’t sure she wants that future. (So far, very like the short story.) Then, an invitation from their Aunt Euterpe arrives. She wants them to come visit her in Chicago and see the Columbian Exposition. Rosie’s mom is fearful, but decides to send the three kids, Rosie, older sister Lottie, and little brother Buster for the visit, but stay home herself. One of the reasons she decides to do this, despite her misgivings, is that she wants to get Lottie away from her boyfriend, Everett, who she thinks is a drifter, possibly with a prison background. (This is far from the truth, as we find out at the end of the book.)

While the mother attempts to send her own train ticket back, it is intercepted by Granddad, who is a force of nature and a delightfully humorous character. He flags down the train en route, and joins the kids, much to the shock and horror of Aunt Euterpe.

Many humorous adventures ensue, from the kids causing the horribly incompetent servants to quit, to Buster getting lost in the Midway amidst the peep shows and belly dancers. The culmination of the visit, however, is when Granddad takes them to see Buffalo Bill do his show. Granddad’s dog Tip crashes the party, and in the confusion and aftermath, it turns out that Granddad fought in the war with William F. Cody, and they are old friends. This results in an invitation to see the rest of the show in a box, next to Granddad’s idol, Lillian Russell.

The book has a lot of great humorous zingers, great slapstick, and a bunch of historical figures that are mentioned or appear in the book. As usual, Peck writes a great story. He was just an amazing storyteller, regardless of the topic.

I thought there were some interesting parallels between this book and the pair of related books, A Long Way From Chicago and A Year Down Yonder that he wrote right before Fair Weather. In some ways, they are mirror images. In Fair Weather, the country girl goes to the city to find herself. In the others, the city girl goes to the country to find herself. In each, there is a memorable and humorous elder relative. Grandma Dowdel is probably the best, but Granddad is no slouch. In all of the books, Peck’s generous portrayal of both city and country life and his gentle humor make the books particularly great for younger kids.

I should also mention the use of minced oaths in this book. Granddad has a bit of a mouth, but his daughters have taught him to avoid “real” swearing around the kids. So he minces oaths in a hilarious manner. My favorite is “hecaTEE!” which has the brilliance of combining a hellacious reference with the goddess of witchcraft.

Fair Weather is a lot of fun, and my kids enjoyed it. It seems to be impossible to find a bad Richard Peck book. It is sad that he is no longer with us, and that there will be no more stories, but we are fortunate to have the many he wrote over a long and productive career.

Posted by Diary of an Autodidact at 3:26 PM

Email ThisBlogThis!Share to TwitterShare to FacebookShare to Pinterest
Labels: Fiction, Reading With my Kids