Source of book: Borrowed from my father-in-law

While staying up at my in-law’s cabin, I got quite a bit of reading done. For the most part, I read books I brought, but I couldn’t resist reading this one, from their kind of odd collection of books that they left there when they moved north. This book is delightful, from the gorgeous photography to the detailed descriptions and history of the many native evergreens here in California.

California is an amazing place. A lot of people think of it as a few coastal cities. Los Angeles (and mostly Hollywood), San Francisco, and maybe San Diego. But California is a big place. Outside our population centers, we have a LOT of open space. Believe it or not, 52 percent of California’s area is publicly owned: National parks; state, national, and local forests; national monuments; and open desert managed by the Bureau of Land Management. You can find solitude easily enough if you are willing to strap on a pair of boots and go hike.

Because of a vast range of climates, California is also home to an amazing diversity of flora and fauna. Our conifers are a case in point. We have 52 native species - 14 of which are found only in California. That’s more than any other state….by a good margin. We have more unique conifers than many countries.

I have been interested in trees as long as I can remember. I think I first fell in love with a species when we camped up on Mt. Pinos when I was around 10ish. Throughout California, we have a close relative of the Ponderosa Pine: the Jeffrey Pine. The two are very similar, and often hybridize, but they have one highly significant difference. The pitch of a Ponderosa can be boiled down to make turpentine. Try to do that to a Jeffrey, and you will blow yourself up. The Jeffrey Pine has a volatile aromatic compound which is highly explosive at the right temperature, as early pioneers in California learned the hard way. This compound also makes the bark of a Jeffrey smell like honey or vanilla or pineapple (depending on your perception.) It’s really lovely, and makes the whole forest smell nice on a warm day.

Since then, I have gotten pretty decent at telling apart many of our native trees, although I won’t claim to remember all the different kinds of cypress and where they grow. (We have multiple endemic species which grow only in certain places, so if you know where you are on the map, you know which one it is.)

For the most part, I knew the basic identifications in the book, although there is a lot of information on the plants and their history and uses and evolution. It is informative both for the novice and the aficionado.

There is one thing that I learned, however. I had been thinking that a certain distinctive tree in Southern California was just a Douglas Fir. It turns out that it is a relative of the Douglas Fir, Pseudotsuga macrocarpa, commonly known as the Big Cone Spruce (what? It’s nothing like a spruce!) or Big Cone Douglas-fir. And, of course, Douglas Firs are not really firs at all, but a separate family of conifers. This particular tree is endemic to the mountains of Southern California, including the coastal range that contains Mt. Pinos. When I lived up there, there was a small stand of them on a shady side of the hill around 5000 feet elevation.

Whatever you call them, they look like nothing else, with their branches sticking straight out, often on opposite sides of the tree. Some have described them as looking like the masts of a square-rigged ship. Not only that, but they can regenerate leaves after a fire. It’s pretty cool. 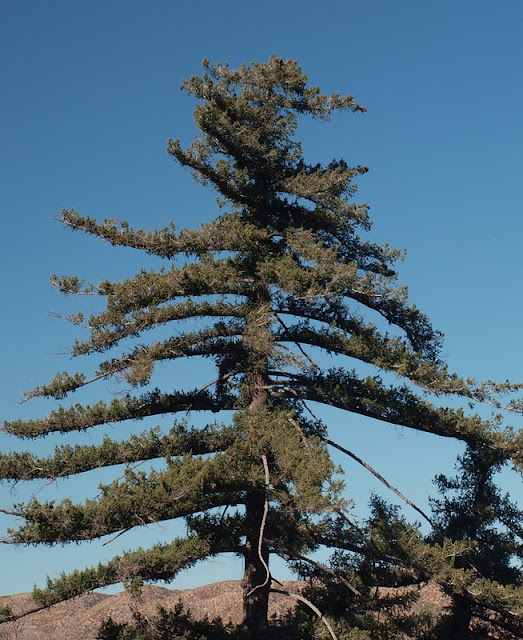 Unlike the Douglas Fir, which is arguably the most important timberwood in the United States - chances are, your house is built of it - the Big Cone Douglas-fir has lousy wood for anything other than firewood and fencing. Despite being commercially unfit, the trees are near-threatened because of loss of habitat - that’s the cost of living near Los Angeles.

There are so many other great trees in the book, from Singleleaf Pinyon, to the California Nutmeg. In any case, I really enjoyed this book, and am thinking of adding it to my own reference library.

Posted by Diary of an Autodidact at 2:26 PM