The Winter's Tale by William Shakespeare

Because of Covid-19, theaters are closed here in California, and the Utah Shakespeare Festival is cancelled. Thus, I doubt I am going to have many chances to see live theater in the near future. We have been getting by with video sources, even though they are not the same. The Globe in London is releasing filmed performances of various plays, including this one.

I first saw A Winter’s Tale at Bakersfield College about two decades ago. I can’t remember if I was dating my wife or recently married, but it would have been before kids complicated our theater life. Of course, eventually, they started coming with us, which has been all kinds of fun.

The Winter’s Tale is one of Shakespeare’s problem plays. Or maybe one of his late romances. Whatever you want to call it, it is a comedy in the sense of having a happy ending, but could easily have been a tragedy with a slightly different ending.

I find it fascinating in part because of the way Shakespeare separates the serious drama and the comedy. The first part of the play, set in “Sicilia,” is drama and tragedy. The second part, full of comedy and high spirits, is set in “Bohemia.” (The locations are obviously fictitious, because Bohemia then and now is landlocked, and does not have a coast as in the play.) At the end, the humor of Bohemia practically invades the traumatized Sicily and brings (literally) life back to it.

Shakespeare borrowed the plot from a story by Robert Greene, Pandosto. The original is a full tragedy, with the king killing himself after accidentally falling in love with his lost daughter. Shakespeare chose to dramatically change the ending, writing what is now one of the most iconic scenes in the play, when the statue comes to life. But I get ahead of the plot.

Leontes, king of Sicilia, is entertaining his childhood friend, Polixenes, king of Bohemia. Polixenes is homesick, and decides to return. Leontes tries to persuade him to stay, but is unsuccessful, until queen Hermione intervenes, and persuades Polixenes to stay.

Rather than please Leontes, this act makes him insanely jealous, imagining that Herminone is cheating on him with his friend. Furious, orders one of his lords, Camillo, to poison Polixenes. Instead, Camillo, convinced of the innocence of the queen, warns Polixenes and the two of them flee to Bohemia. Leontes then denounces the queen despite her pleas of innocence. Her tears are of no avail, he calls her unborn child a bastard, and throws her in prison. When the child is born, orders that she be abandoned to her death.

Herminone appeals to the Oracle, which declares her innocent. Leontes is not convinced, despite the warning that he will have no heir until his lost daughter is found. As a result of his stubbornness, his son dies of a wasting sickness, and Herminone appears to die as well.

Bereft, Leontes comes to his senses at last, and realizes he is wrong. However, it is, at this point too late.

The courtier sent to abandon the daughter does so, but is chased away soon after, with Shakespeare’s most famous stage direction, “Exit, pursued by a bear.” This was a disappointing moment in this particular production, with just a banner with a picture of a bear unfurled. Was the bear suit at the cleaners or something?

The next act opens sixteen years later. The infant has grown into a lovely young woman, Perdita, who has caught the eye of Prince Florizel, who courts her in disguise. Polixenes, accompanied by Camillo, spies on them, and erupts in fury at their betrothal. After threatening Perdita and her adoptive family with horrid punishment, he orders them never to see each other.

Camillo has other ideas, however. He wishes to return to his native land, and takes Florizel and Perdita with him.

At the end of the play, all these identities are revealed, and father and daughter are reunited - and Florizel and Perdita can marry and clinch the alliance.

But there is one thing remaining. The faithful Paulina, widow of the unfortunate Autigonus, eaten by the bear, reveals that she has a peculiar statue, true to life of the dead Hermione. It is no spoiler this many centuries later to say that the statue is really Hermione herself, carefully tended by Paulina all these years. After sixteen years of penance, Leontes is a changed man, and finally worthy of Hermione.

A play like this, with its improbable plot, stands or falls on the quality of its direction and acting. The Globe, unsurprisingly, rose to the occasion regarding both. (My only quibble is the lack of a bear…)

While all of the male leads were good, I thought that the three females around whom the play centers were particularly outstanding. Sirene Saba, as Paulina, had tremendous stage presence and a projection of authority that was a perfect contrast to the unstable and irrational Leontes (Will Kean in a convincing performance.) Nora Lopez-Holden as Perdita brought the right level of exuberance and naivete to the role. Likewise, Luke MacGregor as Florizel seemed just the sort of ditzy prince to make a game of courting a shepherdess. Becci Gemmel, in a trousers role as the clow, Autocylus, was hilarious. Adrien Bower (Camillo), Oliver Ryan (Polixenes), and Howard Ward (Antigonus) were all suited to their parts.

Special props, though, go to Priyanga Burford as Hermione. She is every bit as commanding as Paulina, then vulnerable and shattered after the false accusations - but she retains her dignity throughout. The statue scene was incredible because of her ability. In previous versions, Hermione is posed in a neutral position, to make standing perfectly still easy. In this one, Burford held her arms in an artistic pose. For at least ten minutes. The level of control this must have required is astonishing. I couldn’t take my eyes off of her during the whole scene. Since this was a filmed version of a live performance, this wasn’t done with camera cuts. She did this - night after night. Highly impressive.

The unjustly accused Hermione (center), with her irrational husband Leontes (right), as Paulina (left) looks on with horror. 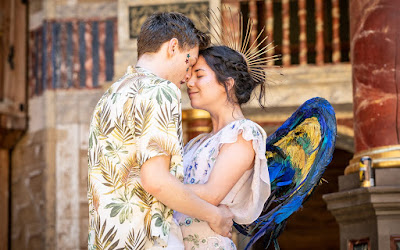 Florizel and Perdita at the carnival.

I also love that the Globe uses live musicians and music composed for the occasion. This was, like previous plays I have seen, a good bit of the fun.

Unfortunately, by the time I got to writing this, the streaming of this play had ended. However, The Globe intends to continue to release past productions in two week increments, and I will be watching as many as I can. (Next up: The Merry Wives of Windsor.)

Information about the plays can be found here.

The specifics for The Winter’s Tale are here.

Posted by Diary of an Autodidact at 12:54 PM