Love in the Time of Covid-19

Covid-19 has certainly revealed some truths about the world we live in. It has exposed weaknesses in our health care systems, revealed large segments of the population to be living in denial, and concentrated individual flaws. One way this has come to light is, of course, of no surprise to lawyers.

During the “shelter-at-home” orders around the world, domestic violence has increased significantly. This should surprise no one. Abusers stuck at home with their victims, but now with less money and little to occupy them...surprisingly turn out to abuse more. Likewise, other stressors tend to increase abuse, such as the loss of a job, and stress in general. I would also guess that some who, in normal times, are at most emotionally abusive, escallate their behaviors. And finally, all of us have probably kicked the dog or yelled at our spouse or kids when under significant stress, even if we are not abusive.

The bottom line is that the need for restraining orders and divorces has increased during the pandemic.

On the other hand, some of us have found that tough times bring out the best in our partners.

Amanda and I have always worked well together. (Her parents noted that we were super efficient working together, and others have commented that we are a great team.) Because of the particular way our marriage works, the pandemic wasn’t nearly as much of an adjustment as it was for many.

Both of us have worked since the marriage, with Amanda taking only her three months of parental leave with each child. That means I have had sole childcare responsibility for infants - and later kids. We have always split cooking. While she has definitely done more of the cleaning than I have, I know how to do it, and always have chipped in. More than anything, we have split things up in a way that works for us. These days, with three teens and two tweens, they take a larger role as well.

The pandemic did make some changes, however.

First, my work has been barely enough to keep my overhead paid for the last couple of months. (It turns out seniors don’t want to risk catching a deadly disease….) This has significantly reduced our income. Don’t get me wrong: we are some of the lucky ones, in that she continues to work, we have savings, and we can live below our means without suffering particularly. And the extra time has been helpful for other things. (See below.)

Second, Amanda’s work has become more stressful as a result of all those Covid patients in her unit, between her staff stressing about their health and the scramble to get enough protective equipment. (And yes, the Trump administration has made this MUCH worse by confiscating supplies from California to use as bribery for more favored states, and the lack of a coordinated Federal response has meant hospitals have had to do their own sourcing at large expense. That, and the right wing conspiracy theories accusing nurses of lying about Covid deaths has definitely not helped.) She has had to work extra shifts, and the ones she works have been more stressful for her.

Third, the kids, who were already in hybrid charter school programs suddenly had to do all their work at home, with iffy internet and teachers who were not all prepared for a different system. (No diss intended to the teachers, who were put in a tough spot and had to adapt on the fly.) Because of this, I had to take the kids to my office (it was just us there most of the time, and thoroughly distanced otherwise) for a decent internet connection so they could do their video stuff.

Other adjustments we made included the kids and I taking over all of the food preparation, planning, and shopping, for a few weeks. We are still doing most of it, and definitely all of it when Amanda works four nights in a row. We have also shifted the days of the week we go hike or otherwise exercise (in a socially distanced manner) so that it coincides with the days between night shifts for Amanda. (So she can sleep.)

What feels, in some ways, surprising, is just how little our marriage changed.

Sure, the specifics are different, but this is how we function. We sit down periodically and hash out schedules and tasks and find solutions. We plan our meals for the week as we always have. We figure out who drives where and when. We shift tasks back and forth based on who is busy and who has time.

And, we make the most of those times we are together at home.

Today is our 19th anniversary. Time has gone by way too fast. Our eldest will be an adult next year. Neither of us is exactly who we were when we married. We have worked to recover from our cultic indoctrination. We have had to draw some painfully firm lines with our families. We have weathered both our political and religious tribes taking a sharp turn toward the toxic ultra-right. Our own beliefs have changed and evolved with time and circumstance - as they do for any healthy, growing person.

But through it all, we have been a team. We are co-conspirators, as I like to say. Us against the world. Covid-19 is just another challenge, another unexpected twist in life’s journey. I am sad that not all couples are able to come together and get things done, but am thankful that we can.

A large part of that is Amanda, who has always believed in me, and always let me step in to those areas of “women’s work” that many women get defensive about and try to micromanage. She has always encouraged me to spend time with our kids, and has never complained about all our camping and hiking and kayaking together. She almost always has a creative and workable solution or plan to deal with changes and challenges. (Although she is much better at it if you let her sleep after a night shift…)

If anything, the stress of the pandemic has renewed my appreciation for just how great of a spouse - and person - she is. She is literally on the front lines of this - she cares for Covid patients every time she works, either in direct care, or as charge nurse for the Covid unit. She keeps people alive, she keeps her staff focused, she finds solutions. At home, she does the same. And she keeps us all loved and cared for as well.

After 19 years as her husband, I am ever more convinced that marrying her is the best decision I ever made. Here’s to many more years together. 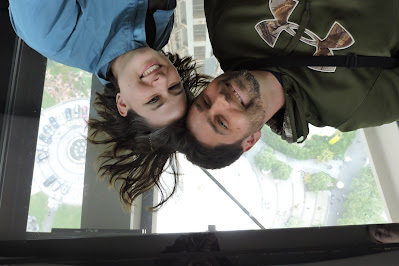 Goofing off at the Seattle Space Needle last year.

Posted by Diary of an Autodidact at 12:39 PM