Forest of a Thousand Lanterns by Julie Dao 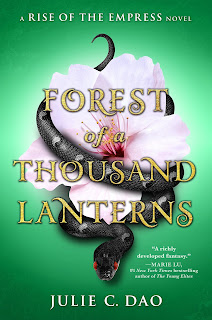 In general, this book wasn’t that well loved by our club. Perhaps it suffered in comparison with Deacon King Kong, which was outstanding, but it also had some flaws of its own.

The book is meant to be a retelling/reimagining of the backstory for the Evil Queen from Snow White. The sequel book presumably covers the Snow White part of the story. Dao sets the story in a mythical Asian-style kingdom that appears to draw elements from both Imperial China and Samurai-era Japan.

Xifeng is a beautiful young woman, trained by her abusive aunt to be cultured and talented, in preparation for a grand destiny. She is, so the cards say, to become the empress someday. To this end, she runs away with Wei, her lover, for the capital city. She then enters the Emperor’s palace as a lady-in-waiting, before scheming to eliminate rivals and eventually marry the Emperor.

Xifeng starts out as a sympathetic character, and for a while, there is at least the question of whether she will turn to the dark side or not. Unfortunately, the real turning point is when she abandons Wei to go to the palace...and this takes place only a third of the way into the book. Thus, pretty much any suspense is over early on, and the rest seems like playing out the string, so to speak.

The problem isn’t just with the early decision, but with the psychology. While Dao tries to make Xifeng struggle with her choices, it doesn’t seem like she really does, after she commits to being empress. In the cutthroat world of the palace, it is literally kill or be killed, and Xifeng doesn’t have much agency other than to “follow her destiny at whatever cost.”

Furthermore, Xifeng lacks complexity. Her most salient character is her beauty. That’s her calling card, and why she gets what she wants. She has some skills as a result of her training, but they seem performative. She knows vast amounts of poetry, for example, but poems seem to be weapons for her to use, not wisdom she has absorbed. Her motivations are too simple, too, to be believable.

The book does have some good parts. I thought that the descriptions were evocative, particularly the forest and the palace. Dao creates a compelling world for her characters. The scene with the hot springs and mirror in the water is memorable and haunting.

The book also seems to start to go an interesting direction with Xifeng seeking to be free from the patriarchy of her “traditional” culture. This is one reason that she spurns Wei, who, after all, is a bit patriarchal. The forest demon queen is correct, however, that there isn’t anything more “free” about working in the palace. Even becoming empress is, in a world where women are rarely permitted to rule, simply a chance to be a more powerful possession of a man. This interesting question is rather cast to the side as the book goes on. In the actual event, Xifeng becomes the minion of the Serpent God, and not any more free than she would have been as a wife kept at home. And more than that, she wouldn’t even have the benefit of true friendship and love.

“The truest love and friendship rarely come to those in power.”

Also perceptive is a “red shirt” member of the diplomatic envoy they travel with.

“I’m sick to death of lords and kings and emperors. What do they do but play games and let their people pay the price in blood? We have no quarrel with each other. Only kings are arrogant enough to believe the world too small to hold other men.”

This echoes observations by Steven Pinker and Tim Blanning.

Overall, the book was disappointing, but not terrible. It was a diverting read for stretches, before kind of fizzling into inevitability by the end.

Posted by Diary of an Autodidact at 3:20 PM