In the Company of Cheerful Ladies by Alexander McCall Smith

With this book, we have finally filled in the weird gaps in our experience of this series. Well, at least the kids have. I have never read the very first book, although the events of that are fairly well covered in subsequent books, fortunately. From now on, we can continue in order. 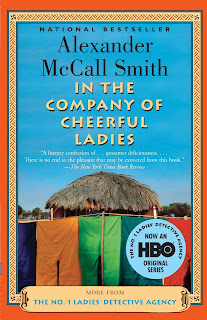 In the Company of Cheerful Ladies is the sixth in the No. 1 Ladies Detective Agency series, featuring lady detectives Precious Ramotswe and Grace Makutsi, as well as the host of other characters populating McCall Smith’s middle class Botswana world.

Speaking of characters, this book introduces two important characters: the hard working and resourceful Mr. Polopetsi, and Mma. Makutsi’s future husband, Phuti Radiphuti. Both featured in the next book in the series, Blue Shoes and Happiness, which we listened to five years ago. (I can’t believe it has been that long, but apparently it has…)

While all of the books in the series tend to be a bit leisurely and rambling, this one seems more so that the others, in part because the multiple plots take a long time to come together into a theme. That’s not a bad thing, though. My kids have loved these books from the beginning - they introduced me to them - and find the gentle style appealing. And also the humor, which is dry but affectionate.

So what happens in this book? Well, to start with, Mma. Makutsi upends the equilibrium of the Agency by confessing that she prefers regular tea over bush tea. (In the world of the books, this is indeed an earth-shattering revelation…) But this is just a portent of greater upheavals to come.

The older apprentice at Tlokweng Road Speedy Motors (the business of Mr. J.L.B. Matekoni, husband of Mma. Ramotswe) has taken up with an older, rich, married woman. When he, through his own stupidity, ruins Mma. Makutsi’s new teapot, he insults her and quits.

While following him, Mma. Ramotswe sees him enter a rental home owned by Mr. Matekoni with the woman - is it being used as an illegal bar? She is startled enough to run Mr. Polopetsi off the road, which is how they meet. Mr. Polopetsi turns out to have been unjustly imprisoned for an accident that wasn’t even his fault - he got the blame as the low person in the hierarchy. Mma. Ramotswe takes pity on him and offers him a job. This turns out to be a great decision for all involved, as Mr. Polopetsi has many skills and a tremendous work ethic.

Meanwhile, Mma. Makutsi, lonely despite getting 97% on the examinations at the Botswana Secretarial School, takes a dance class, and ends up stuck with the awkward, stuttering Phuti. She doesn’t find him attractive at first, but eventually, they find they are a good match.

How will all this get resolved? And, for that matter, how will they solve the case of the banker who absconded with a bunch of money? Will common sense, good will, and copious quantities of bush tea be enough to win the day? Well, we know the answer to that last one, at least.

The themes of the book are rather interesting. As usual, McCall Smith looks at the collision of the traditional and the modern worlds. While “traditionally built,” and claiming to hold traditional values, Mma. Ramotswe is, in her own way, very much a feminist and modernist. She may cook for her husband and take care of him, but she also picked a kind and decent man who cares for her just as much. Mma. Makutsi wishes to find a suitable companion, and is, like most of us, attracted to good-looking people. But she recognizes a good man in Mr. Radiphuti, even if he isn’t conventionally attractive.

Another theme in the book is that of seeking the kind route, rather than the confrontational one. Mma. Ramotswe treats Mr. Polopetsi with respect and kindness, and he is able to return the favor in tracking down her stolen van, and in helping her deal with Note Makote. Mma. Makutsi chooses to be kind to Mr. Radiphuti even though he isn’t her first choice, and discovers a gem. Mma. Ramotswe is compassionate to Note Makote’s mother, and learns crucial information about his past.

As usual, the multiple plots move the story forward and are interesting, but what really makes the story come alive is the way McCall Smith writes characters. They truly are unforgettable and compelling. They are complex, with human faults and blind spots, but thoroughly likeable. It is easy to see how the series has grown to over twenty books. While they are classified as “mysteries,” they really aren’t as much about the mysteries the detectives solve, as the relationships they navigate.

As I have said about the series, it really is best to read them in order. We did it out of order mostly because of which audiobooks were available at our library. (Now, I order them, and rip them to a USB drive so we aren’t bound by due dates.)

We definitely enjoyed this installment, and will be continuing to listen to these on our adventures in the future. Lisette Lecat does an outstanding job as usual on the audiobook.

The Tears of the Giraffe (#2 in the series)

Morality for Beautiful Girls (#3 in the series)

The Kalahari Typing School For Men (#4 in the series)

The Full Cupboard of Life (#5 in the series)

Blue Shoes And Happiness (#7 in the series)

Posted by Diary of an Autodidact at 1:06 PM